When a major earthquake hit the Kaikoura region of New Zealand’s northeastern South Island last November it lifted an extensive section of the area’s intertidal zone by as much as five metres, leaving enormous numbers of the area’s paua abalone (Haliotis iris) high and dry. Efforts to get them back underwater before they died were largely unsuccessful. 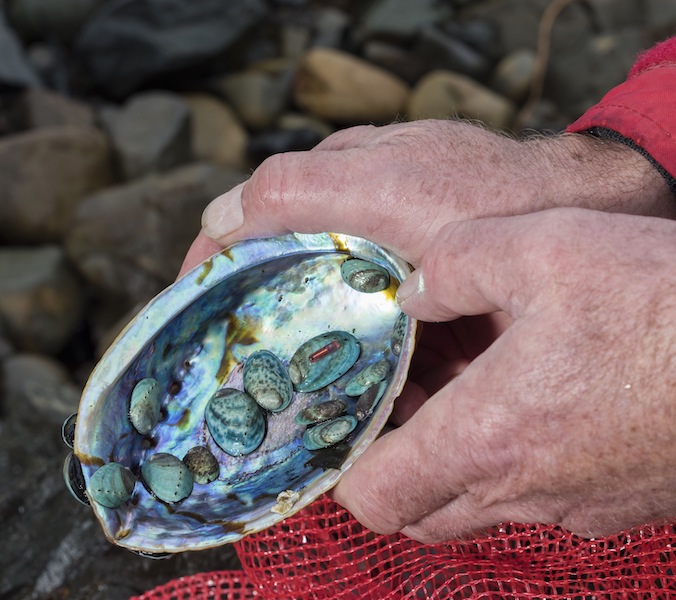 But National Institute of Water and Atmospheric Research (NIWA) scientist Reyn Naylor is working with the local Paua Industry Council and members of the paua aquaculture and fisheries sector, including hatchery facilities, to develop crucial protective habitat for paua juveniles, before they recruit into the fishery. To survive to maturity juvenile paua need small and dark places under rocks where predatory fish can’t reach them.

So Naylor is designing and creating what he calls “concrete blocks” resembling upside-down oven trays that will become shelters for juvenile paua. Each “block” measures about 40cm long x 30cm wide x 11cm tall and weighs about 16kg, so it won’t move around in the wave surge. They have lots of little openings around the outside so seaweed and other food can wash in and the paua can come and go.

Recently 12 of them were put out in the Wellington area so they can be tested for optimal density, and paua stocking and survival rates.

Paua mature at somewhere between three and five years old, Naylor said, when they leave their shelters to come out and breed, at a size of about 125mm, which is the legal harvest size. So NIWA will monitor survival rate the 50 or so 30mm juvenile shellfish released with each block prior to recruitment into the fishery and ultimately the breeding population.

If this works well they’ll put out another 12 blocks in the Kaikoura area, and monitor survival and recruitment levels there. And if that works well, about 300 will be deployed in areas where most of the juvenile paua habitat has been lost. Naylor said the paua are fairly easy to grow as juveniles in a hatchery and that they’re relatively easy to breed once they mature and get ready to spawn.

One of the main questions Naylor and his colleagues hope to answer is the best or most appropriate density for paua juveniles of different sizes. In the wild they burrow and hide under very large rocks that cannot be moved to check on so getting an accurate tally is difficult.

The work is funded by the Paua Industry Council and Seafood Innovations Ltd.