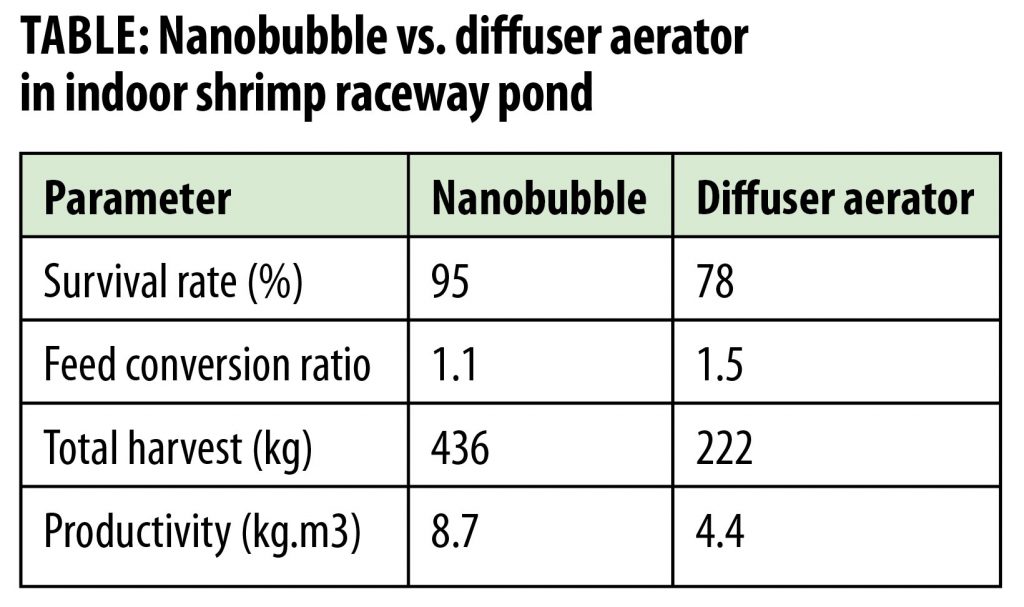 Using nanobubble generator in the production of whiteleg shrimp (Penaeus vannamei) in indoor raceway ponds resulted in high survival and growth rates, according to a new study.

“The results revealed that nanobubble has managed to maintain dissolved oxygen (DO) at the optimal range and affected the shrimp growth,” said authors Asri Ifani Rahmawati, et al. in the study, “Enhancement of Penaeus vannamei shrimp growth using nanobubble in indoor raceway pond,” which was conducted in East Java, Indonesia.

Fifty-meter ponds were stocked with 34,000 juvenile whiteleg shrimp at a stocking density of 680 per cubic meter. Results on day 81 showed that the nanobubble treatment yielded better survival rate, feed conversion ratio, total harvest and productivity. The total virus-bacteria also decreased, and total harvest and productivity were almost a hundred percent higher. The results were compared to another treatment using diffuser aerator.

The study investigated the effects of using a nanobubble generator on the growth environment. With whiteleg shrimp farming steadily growing in Indonesia, the authors stressed the need for “the best practices in technology and management of water quality” and acknowledged the major role of DO in improving water quality.

There is a positive correlation between shrimp biomass and oxygen consumption rate. “The enhancement of growth proved that the energy absorbed by shrimp in a nanobubble pond is higher because of the oxygen levels available in the pond,” they say.

The study was published in Aquaculture and Fisheries.