The Philippine government bats to address the challenges impeding the growth of the Philippine mussel industry with the Mussel Industry Strategic S&T Program. 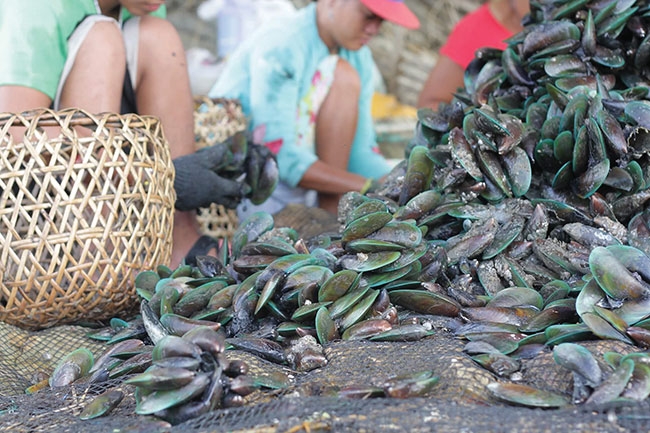 Under this initiative by the Philippines Council for Agriculture, Aquatic, and Natural Resources Research and Development of the Department of Science and Technology (PCAARRD- DOST), hatchery and nursery protocols/techniques were introduced to delve into concerns such as low production of mussels and insufficient and unstable seed stock.

“The mussel industry in the Philippines is still dependent on collection of wild spats,” Dr. Carlos Baylon, a professor at the University of the Philippines – Visayas (UPV) and the chair of the First Philippine Mussel Conference, told Hatchery International. “The supply from the wild should be supported by production from the hatchery.”

Spat supply is affected by both human activities and nature.

“The deterioration of the culture/spawning sites are due to anthropogenic perturbations, occurrence of natural calamities – flood, landslide, typhoon – and inadequate number of mussel broodstock left in the traditional mussel growing areas due to overharvesting,” said Dr. Mary Jane Amar, a mussel expert at UPV.

Mussel production in the country uses stake and longline methods.

“According to the PCAARRD-funded Ex-Ante analysis for the mussel spat requirement, the country needs about 679 million and 151 million spats per year for the stake and longline method, respectively,” Amar said.

This was estimated based on the 900-hectare area available for culture.

To work on these issues, including spat production and quality, UP-Visayas launched in 2014 the Mussel Hatchery and Nursery Program with funding support from the PCAARRD- DOST.

At the congress, held in October 2018, Amar presented the program results.

In the abstract, she cited, “This is a recent work on the development of larval rearing techniques for the green mussel, P. viridis in the country. P. viridis larval survival from D-hinged to pediveliger stage was about 50 percent, and from D-hinged to early spat stage (1mm) was 4.4 percent. In the nursery phase, survival from early spat to spat (1cm) was 94 percent,” she said.

The hatchery-produced P. viridis spats were transported to different culture sites as far as the northern tip of the Philippines located some 1,250 km from the site, and attained high survival of up to 100 percent.

Aside from reliable and quality spat, farmer behavior and technology are also holding back industry productivity, industry leaders told The Daily Guardian on the sidelines of the congress.