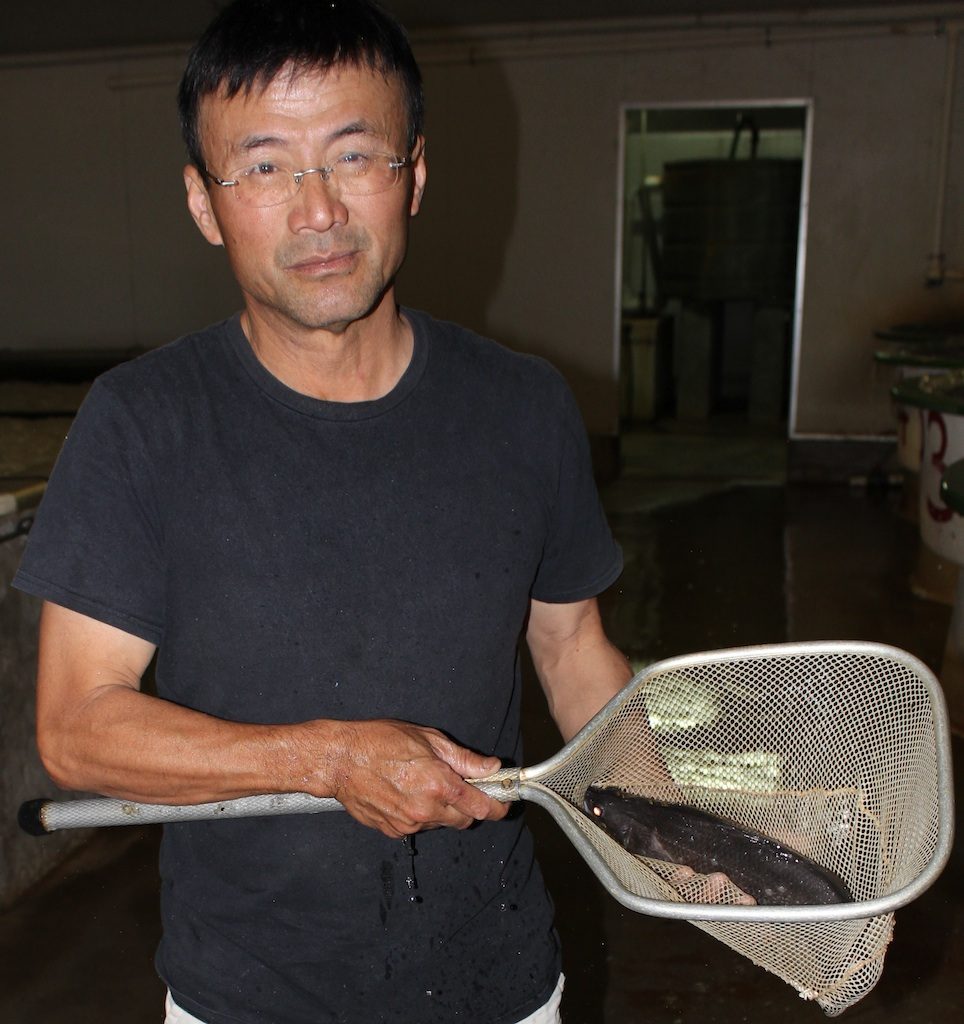 Recirculation technology has been around for a number of years and is showing clear signs of being a mainstream production method. One of the Australian pioneers is Mark Lee. Hatchery International first visited Lee’s farm in 2005 when it had been operating for five years, and now we were interested in his opinions about the technology after 13 years of operation.

Lee poured the foundations for his eight-module Fish Protect (FP) farm in 1999. Fish Protech guarantees that each FP-CAS (Controlled Aquaculture System) module will produce 15t/annum. Lee’s eight-module farm does better than that, consistently producing 2.5 to 3 tonnes of market-size barramundi (Lates calcarifer) every week, and has done so since he started in 2000.

What makes this story special is that it highlights what it takes to make a success of fish farming in general and with recirculation technology in particular. Since the time when it was widely considered that indoor fish-farming was a passing fad, Lee has not only survived, but thrived. The ability to grow high quality barramundi attracted him to the Fish Protech technology, which was developed and tested in South Australia.

He started off with a four-module FP-CAS farm and quickly determined that he could operate a farm twice that size; and that there was a market for live barramundi. In the first year, he extended his farm to eight FP-CAS modules.

But he puts his subsequent success down to a leap of faith, constant vigilance, hard work; and returning a healthy percentage of his profits back into the business. As a migrant to Australia from Taiwan, and with little English, he had no experience in aquaculture, which in many ways helped him. He was however, a trained engineer, which helped him understand the mechanical workings of the FP-CAS technology. He avoided shortcuts, stuck to the instruction manual and listened to advice from experienced fish farmers. He gave particular credit to the three-year training program he followed and to the support he received from Johan Don at Fish Protech.

The first year he was supervised closely by his trainer and had no major problems. It was in the second year, when he was more on his own, that he found he still had a lot to learn. By then the eight-module farm was fully stocked with 20,000 kg of fish, all at different growth stages ranging from 20 to 600g each, spread over the farm’s 32 sections. Keeping track of the fish and ensuring that each section received the right amount of feed, as well as grading, and harvesting market-size fish were major tasks.

With help from Fish Protech he developed a simple system, recorded on a white-board in his office. All sections are shown on the board and marked with the exact number and average size of fish in each. From this he calculates the ration needed to feed each section. Every morning he prepares 32 buckets with the pre-determined quantity of feed of the correct pellet size for the fish in each section. By hand feeding floating pellets and observing the fishes behaviour Lee can judge if they have a healthy appetite. This way he eliminates wasteful over-feeding, which causes water quality problems. He records any fish that are removed from a section, and regular sampling assures him that the target growth rate is maintained. This allows planning ahead by several months for the harvesting of market size fish. By controlling his stock in this manner he overcame most of his second year problems.

The third year was also a learning curve as his fry supply was interrupted by problems in the hatchery industry. Australian hatcheries were affected by a Streptococcus outbreak, and inevitably, the disease found its way onto the farms. Lee worked with the hatcheries on the development of a vaccine, and made sure that his fry were strictly quarantined away from the growout farm until they had been vaccinated.

After that industry-wide setback, the following years were stable and Lee’s management, building on his experience, turned the farm into a profitable business.

The water supply is bore (well) water at 25°C, and slightly mineralized – the carbonate content helps buffer pH, although Lee finds it necessary to dose occasionally with sodium bicarbonate to keep the pH at 6.5, the optimum level for barramundi. Overall daily water use in the modules is less than 2%.

Each of the FP-CAS modules consists of a 150,000 litre tank, In the centre of which is a water treatment stack incorporating a bio-filter and the aeration unit that assures high oxygen levels. On each side of the treatment stack are two compartments for growing fish of different sizes. Suspended organic material is removed by a 60µm drum filter, and the water then passes over a bank of four 400 Watt UV tubes before returning to the tanks.

Pumping is by a simple, cost-effective airlift system that moves all water through the treatment stack every four minutes – a flow rate of 35,000 l/min. The natural air delivered by the blowers both aerates the water and transfers heat thus making it possible to for Lee to maintain tropical temperatures during the winter months, and grow tropical- and warm water species close to profitable markets in temperate and cool zones. By eliminating conventional pumps the FP-CAS technique has a very small energy footprint, which allows the modules to operate at lower stocking densities than traditional RASs, yet still achieve a very low unit energy costs: Lee averages 0.5kW/kg of fish harvested. Supplementary oxygen is supplied to the nursery tanks by air stones to assure high O2 levels.

Lee sources specific pathogen free (SPF) fry from Queensland at 25mm in length, and rears them in 38 2,000-l nursery tanks for three months, by which time they’ve reached 100-120 mm. Fry are graded twice a week in the early stages, then once a fortnight as they are effectively sorted into size cohorts. Fry are purchased every two months to ensure the nursery is always fully stocked. This is important because under Lee’s FP-CAS management system, new stock is introduced continuously, replacing fish that are harvested. Having seed stock available every four weeks, year-round, is essential for profitable operation.

At 100mm the fry are vaccinated against Streptococcus and stocked into the grow-out modules. Growth to market size (500/600g) takes six months. Some customers prefer larger fish (>1 kg) that take another three months to grow. Sampling and size verification is done every two months and, if needed, fish can be graded to remove the fast growers. While a fully stocked module averages less than 30kg/m3, because of the different growth stages in each module, the load in tanks carrying the fish closest to market size can be as high as 45-50kg/m3.

Lee feeds Skretting diets throughout, from starter rations to growout feed. FCRs are better than 1.1. This reflects both the ability to feed and manage the stock, and low mortality levels, which average <2% during growout.

In 13 years of operation Lee has not had to make any changes or major repairs to his FP-CAS modules, allowing him to focus on the nursery- and post-harvest systems, both of which are crucial. Without access to high quality seed-stock he would have breaks in supply continuity, and lose the confidence of his buyers in Melbourne and Sydney.

Lee counts and grades the fish at harvest and puts similar sized fish in specific tanks. Careful handling is important, as customers like to see healthy and damage-free fish. Post-harvest grading allows Lee to remove fish that do not meet his stringent quality standard for “live” sales. Such fish are sold locally as “fresh chilled.” The post-harvest system also prepares the fish for live transport as they will be fully purged and acclimated to a lower salinity (6%), which improves their taste and helps them over the long haul to market. Selling live fish brings both a premium and a risk. To survive trucking, and then survive in retailers’ tanks the fish must be in first class condition. This has required close attention to training his staff, sourcing high quality seed and feed, and the dedication to make the farm a success.

With FP-CAS technology fish can be produced predictably and economically, allowing Lee to sign long term supply contracts, an advantage not enjoyed by fish farmers who have no cost control nor guaranteed production. The high quality of Lee’s fish was recognised at the Sydney Fish Market Auction where his barramundi were sold on average 8% higher than other farmed barramundi. Lee also believes that the FP-CAS system enables him to produce fish that appeal to the community that likes to “look their dinner in the eye” before they buy.