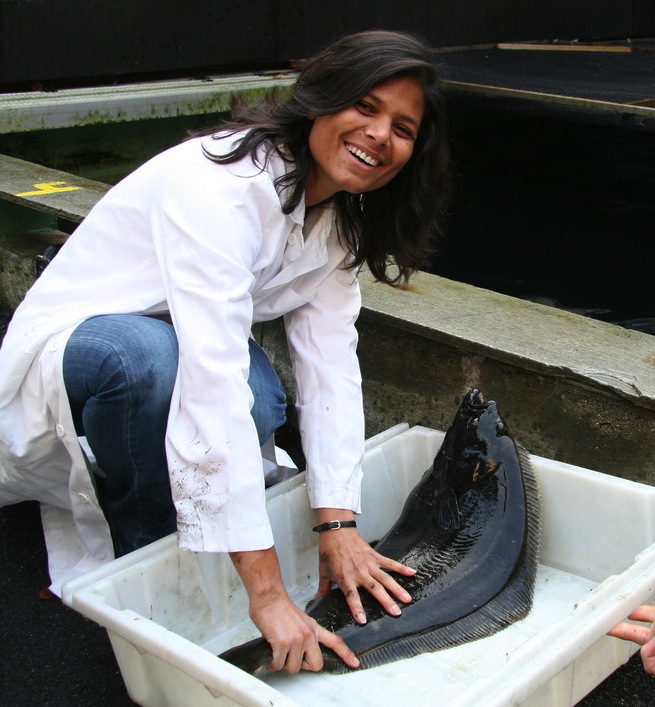 Researchers from the Institute of Marine Research (IMR)

A team of researchers from the Institute of Marine Research (IMR), National Institute for Seafood and Nutrition and Sterling White Halibut, have been working in the DIVERSIFY Project to overcome early rearing bottlenecks.  Birgitta Norberg of IMR in Norway shared results of their recent work with Hatchery International.

There remains a healthy, though strictly managed Norwegian fishery of 2 to 3000 tonnes yearly, yet Icelandic stocks are so low all halibut fisheries were banned in 2012 in hopes that they will recover.  Norwegian aquaculture production of Atlantic halibut has been around 1300 to 1400 tonnes over the last three years Norberg says.  She relates that the Norwegian producer Sterling White Halibut has calculated their market potential world wide to be around 60,000 tonnes.

“At present it is the availability of juveniles that restricts production,” explains Norberg.  “Total egg to juvenile survival averages between 30 and 50%.   But survival through first feeding is very variable.  It can be as low as 5% or as high as 70%.”

“AT IMR we have worked for years with management routines and the development of good rearing protocols based on an understanding of the biology at early life stages,” says Norberg.  The team has pinpointed critical periods in reproduction, larval husbandry, nutrition and health to focus their efforts.

Giving attention to female spawners is a key to success says Norberg.    “Close monitoring of individual ovulatory cycles is crucial in order to get high quality eggs,” she says.  Both F1 and wild caught broodstock can be equally fecund and fertile.  GnRH implants improve egg yield, but may affect ovulatory rhythms and as a result, egg quality.

“Improving protocols and routines during first feeding in order to stabilize survival rates at or over 50% is the area where we will see the most gain,” adds Norberg.

To improve larval growth and quality and to ease transition from live to formulated feed the team has studied both on-grown Artemia and Artemia nauplii.  On-growing Artemia makes them larger and more nutritious, but that did not translate to any difference in nutrient composition, development, or growth performance in the halibut larvae for a two week feeding trial.

The team has studied early weaning with several commercial feeds, Otohime, Gemma Micro and AgloNorse.  Larvae that had been fed Artemia were transferred to dry feeds at 14, 21 and 27 days post-first feeding.  “Initial results indicate that early weaning is possible and the Otohime-fed larvae performed better than larvae fed the other diets,” says Norberg.

Norberg says that the larval stage will receive more extensive research.  “Protocols and rearing technology during first feeding will be a focus,” she says.  “As will the development of a good formulated feed that the larvae will accept.”

“Good hatchery routines and identification/elimination of carriers has more or less solved the VNN problem,” says Norberg.  “But outbreaks can be seen if good hatchery practices are not followed and the larvae are subject to a suboptimal rearing environment.”

She says other infections, both bacteria and virus, appear to have caused bigger loses during first feeding in recent years.  “Again, hatchery routines and good protocols and management practices have reduced the problem to a manageable level.”

The desired market size for halibut is 5-10 kg. and that currently takes 4-5 years.  Males mature early and that slows down their growth. Norberg says that 80% of under-market-size fish are males.

“We have developed technology for large scale production of all female populations which will increase production volume and growth optimization,” says Norberg.  The development of breeding programs will continue to be a priority.