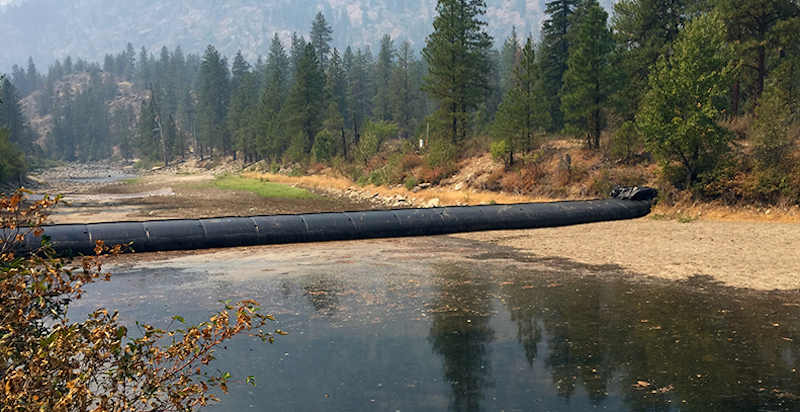 It has been a long, hard summer for salmon across the US Pacific northwest, especially at a chinook salmon mitigation hatchery in Leavenworth, Washington state. The city’s Icicle Creek, source of water for the hatchery, has been anything but cold this year.

According to Steve Croci of the US Department of Fish & Wildlife, and deputy hatchery manager, this summer’s drought caused temperatures in the creek to soar to over 21°C (70°F). And with the heat came severely reduced water flows.

Early in the summer up to 1,000 fish a day were dying inside the hatchery. What’s more, Julia Pinnix, the facility’s information and education program manager, confirmed hatchery officials had to euthanize some 160,000 juveniles to contain two pathogens in the facility.

Realizing that desperate times call for desperate measures, Croci and the unit staff made “some drastic changes.”

Pinnix explained that the staff built an “inflatable rubber bladder dam” some 3m (10 ft) high. It was installed into a nearby diversionary channel that was installed as an experiment some decades ago. The dam had the effect of building up water a few meters deep in the creek-bed and that pushed effluent water pumped up to the channel from the hatchery, down through the soil into a natural aquifer below.

From there the filtered and treated water was pumped back into the hatchery.

“This is unique, for sure,” Croci is cited saying.

FWS officials said the experiment – which cost some $200,000 for the additional equipment and installation – had gone “swimmingly,” and had saved the lives of up to about 1.2 million salmon.