In the past several years, Chinook (Oncorhynchus tshawytscha) stocks across Alaska have entered a phase of reduced productivity, causing challenges for hatcheries in the area in sourcing eggs. A representative for the Alaska Department of Fish and Game (ADFG) said the primary tool available to combat the reduction is limiting the harvest of returning adults, but it may not be possible to drive production to desired levels. 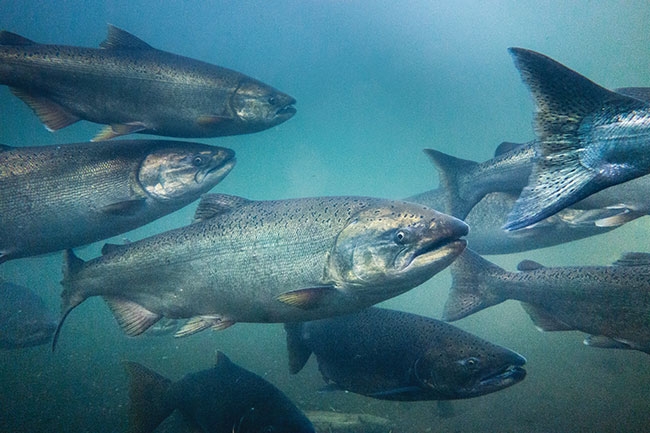 Photo: Adobe stock In the past several years

Gary George, hatchery manager for the William Jack Hernandez Sport Fish Hatchery in Anchorage, told KTUU TV that Ship Creek is usually the primary source of eggs for the hatchery, but Chinook salmon numbers were down significantly in the latest return. His team made up for the shortfall by collecting stock from other sources.

“This appears to be linked to changes in the ocean environment, but no single cause has been identified,” said Jeff Milton, Hatchery program coordinator with the ADFG. “During this same time period, some Chinook stocks have maintained their productivity indicating somewhat focused impacts. This broad reduction in Chinook productivity has affected the one hatchery and three wild populations that we enhance in Cook Inlet.”

In 2018, there were shortfalls in egg collection at three of four collection sites. ADFG maintains a hatchery stock of Chinook in Anchorage and enhance three wild Chinook populations in Ninilchik River, Crooked Creek and Deception Creek. Eggs are collected from wild adults at those sites, which are reared to smolt stage and released back to the original collection site. Returning hatchery reared fish at those sites then provide eggs to support six terminal sport fish stocking projects around South Central Alaska.

Due to Alaska’s strict genetics and pathology standards, Milton said there are few, if any, alternate egg sources available to them. In most years, the four stocks they work with are able to meet their needs, but in a low productivity cycle, the state may simply have to accept a reduction in the stocking program until survivals improve.

“Our enhancement program is charged to create and diversify sport fishing opportunities with the primary objective to conduct enhancement in a manner that does not adversely impact wild fish and habitats,” said Milton. “If we cannot achieve our eggtake goals without adversely impacting wild stocks or make up for a shortage by collecting additional eggs and an approved alternate site, we simply have to accept that and fall short of our stocking objectives. It is a fact of life that nature does not care what we want and not all natural systems exist in a steady state of high production.”

If a long-term shortage of Chinook eggs is anticipated, Milton said the state may consider increasing smolt stocking at more productive sites or reprograming some capacity to other species such as Coho salmon (Oncorhynchus kisutch).