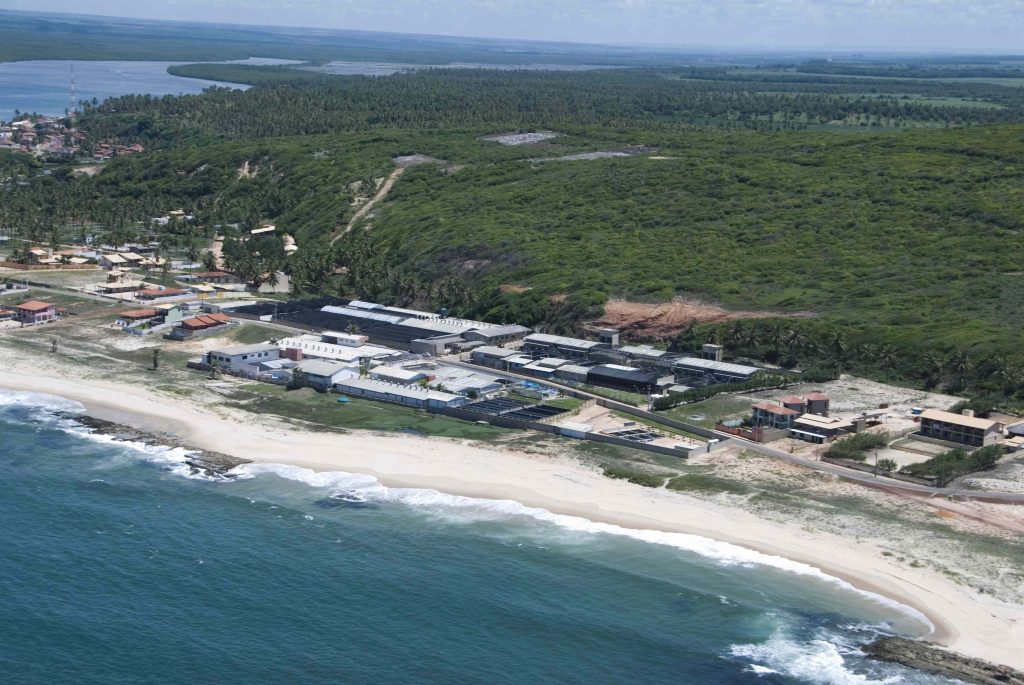 In Brazil, shrimp hatcheries are known as Laboratórios, and if Aquatec is a typical example then it’s easy to tell why! The attention taken to the organization of space and personnel, hygiene, work processes and quality control is of a caliber seldom seen in many university labs.

This is not by chance though; it is the product of a 25 year history of continuous adaptation to a constantly evolving industry, adaptation to changes in farmed species, waves of economic booms and busts, diseases that spread over the industry like giant tsunamis, constant changes in customer demands, and many more pressures. In this report on a recent visit to the hatchery I will try to convey what I saw and what I think has allowed Aquatec to survive and remain a leader in this market.

Aquatec is right at the root of the Brazilian shrimp farming industry. Conceived in 1986 and founded in 1987, its first production came out in 1989, a year when in Brazil there were a few small hatcheries belonging either to shrimp on-growing farms or to state laboratories. Farmers without a hatchery had a tough time obtaining post larvae (PL) to stock and when they did the quality was rarely the best. Werner Jost was one such farmer, owner of Camanor and as they say: “Necessity is the mother of invention.” Werner partnered with one of the few shrimp reproduction specialists in the country, Ana Carolina Guerrelhas, and both started Aquatec.

One key difference between Aquatec and existing hatcheries of the time is that Aquatec was planned from the start to serve small and medium sized shrimp farmers that did not have a hatchery and only around 10% of its production would be targeted at Camanor. This apparently small difference in strategy resulted in an independent project that from the start faced the many pressures of its heterogeneous market and this gave Aquatec the distinctness and strength it has today.

Initially the Brazilian shrimp farming industry relied on local species such as Penaeus subtilis and Litopenaeus schmitti. These species had performance problems and the yield farmers could get out of them was limited. From 1992, with the introduction of the Pacific White Shrimp, Litopenaeus vanamei, everything changed. The potential of this species became immediately apparent and Aquatec lead the way by importing broodstock from Panama that became the source of the many generations of white shrimp that allowed Brazilian shrimp farming to jump from around 2,000 tons to over 90,000 tons in just one decade.

The hatchery grew ahead of the industry; in fact it’s fair to say that it pulled the industry with the increasing supply of good quality PLs. From under 40 million PLs produced in 1992, numbers rose almost 100 times in 10 years, to 3.6 billion in 2002; 300 million PLs per month. This growth was supported on investment in infrastructure and on personnel, through training programs, organizational improvements and very close attention to customers. All this lead to interest from foreign groups and in 2003 the company was bought by Sygen Ltd, a British genetic breeding company specializing in swine breeding but intent on entering other animal production sectors. Sygen brought considerable knowhow in genetics and selection and Aquatec started development of its own line of fast growing and high survival shrimp called SpeedLine.

The first batches of SpeedLine PLs were sold in 2005, but then owing to focus shifts at Sygen, the ownership of Aquatec returned to its original founders in 2006 but genetic breeding continued and today the company sells two lines, the original SpeedLine and SpeedLine SPF. It is Brazil’s only hatchery with SPF (Specific Pathogen Free) broodstock and facilities to produce SPF PLs. The option to invest in new facilities to produce SPF PLs was made as a response to major viral epidemics such as the Infectious Myonecrosis Virus (IMNV) that culled almost half of production in 2004 and 2005 and the White Spot Syndrome Virus (WSSV) that first appeared in Brazil in 2005 and is still today a major problem for the industry.

Fit for the Market

From the brief history above, what have been the key selective pressures that molded Aquatec and made it what it is today?

The shrimp industry in Brazil is facing new challenges and changes; I suspect that on every producer’s mind now is the concern about spread of EMS, a devastating disease that has reached Mexico already and soon will certainly come south. The overall strategy of Aquatec, keeping SPF lines and continuing its selection program should continue to bring value to Brazilian producers.

Industry consolidation, still in early stages, may be a tougher challenge to an independent hatchery although its size and unique technologies will definitely make it a prime target to some of the large investors entering this industry or expanding existing operations. The best way to deal with this is not straightforward and it could be a sale or the setup of large, long-term supply contracts. In the salmon industry now many hatcheries don’t keep broodstock, instead they buy eggs from companies that specialize on genetic breeding and that supply advanced performance eggs.

There are a number of opportunities ahead for Aquatec and the organizational and infrastructure it built over the last decades has it in prime position to take advantage of these.

Diogo Thomaz, PhD, MBA, is a Technical and Business Consultant for the Aquaculture Industry, based in Athens, Greece. After 14 years as R&D project manager and other industry positions he now leads Aquanetix (www.aquanetix.co.uk), a company that develops cloud computing services for the global aquaculture industry. He also heads RealSales Ltd (www.realsales.eu) a sales consultancy company that helps businesses expand their opportunities in export markets. He can be contacted by email on diogo@aquanetix.co.uk

Figure 1 – Aerial view of Aquatec’s main facilities in Barra do Calhaú as they are today.

Figure 2 – The sense of organization and hygiene was always present throughout our visit to Aquatec. Bottles with hand disinfectant and footbaths were constant reminders that the facility we were entering was one where biosecurity was critical. Above you see the main entrance to Aquatec’s offices, Ana Carolina Guerelhas, Aquatec’s co-founder and Managing Director, the main personnel entrance and below one of the water treatment and temperature control stations.

Figure 3 – It all starts with the selection and growth of the new broodstock lines where shrimp grow at up to 2 grams per week until they reach reproductive size of around 40g. After they reach this size the broodstock is conditioned in maturation tanks until spawning happens and eggs are collected.

Figure 4 – Larval stages are very demanding in algal supply and a significant area of the hatchery is dedicated to the maintenance and production of micro-algae.

Figure 5 – At Aquatec there are larval rooms for the nauplii and zoea stages; the facility is in effect two facilities, with all main rooms and water supply network duplicated so that one side can be shut down without compromising continuity of production in the hatchery. One reason this is so is the need to fully disinfect one whole room, a process that involves stopping production completely. A similar setup is available for the postlarvae area, where PLs are readied for the market. Most on-growers prefer to buy smaller PL10 larvae but many prefer to have a head start and get PLs that are 20-25 days old. The final product is what you can see on the picture on the right. If I remember well they are PL20s. The variety in tank sizes has to do with preparing batches for different customers with orders that can be a few million PLs or a few billion. In the tank on the second from the top left picture has a small conical tank with a high salinity brine that is used to slowly increase salinity in the PL tank as this batch is for a farmer that grows shrimp in sea-water.

Figure 6 – A sister company of Aquatec is Genearch Aquaculture, where the main genetic selection program is carried out; Genearch is a SPF-certified facility located at Pititinga beach.