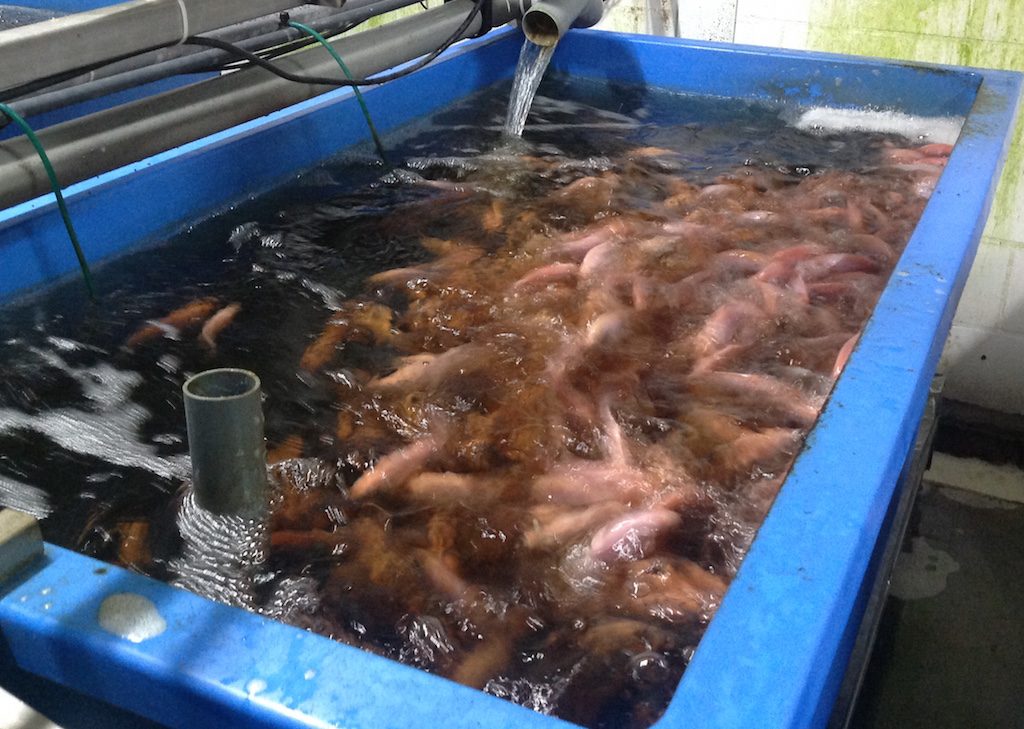 Helping customers around the world cope with severe water shortages has become an increasingly important part of the tilapia-based hatchery operated by Til-Aqua International.

While supplying all-male producing broodstock to customers around the world is the prime focus for Til-Aqua owner, Eric Bink, his follow-up service to clients, especially in Africa and South American, has given him a keen understanding of two key pressures currently facing the tilapia sector.

“One is water and the other is hormones,” Bink told Hatchery International, speaking from his production base at Someren, a unit fed by borehole water and run according to strict hormone-free principles in keeping with EU legislation.

“Water shortages are becoming a massive challenge in many areas today, with drought conditions in all continents.

“I was in Columbia recently, for example, where most of the country’s dams are currently operating at just 40% of their capacity. The only one I saw with more water than that, possibly working with up to 60% capacity, was the one which supports the country’s main fish farming activities and produces 65,000 tonnes of tilapia a year.

“The problem, however, is that producers there are now having to cope with the potential of future restrictions in their access to water, given that from April this year hydro-based electricity services in the area have been switched off for one hour each day to reduce energy usage. The management of that resource is currently in the hands of a private company, whose executives have to choose between the needs of 60 or so fish farmers and seven million local people. You can guess who the winners will be in that situation.

“It’s much the same in many other parts of the world. Take the severe El Nino-led drought, for instance, which is currently affecting Africa. It happens every seven years or so, but seems to be getting stronger each time it comes round.”

“This is a challenge which we, as a global industry, have to solve both technically, through the development of farming systems which are less water dependent than in the past, and through the breeding of fish which continue to perform well, even in the most demanding circumstances.”

“I view fish farming as one of the world’s major protein solutions but for that vision, or potential, to be realized we have to work on water resources around the world and we have to keep developing better fish.”

Til-Aqua currently produces two strains of tilapia from its Dutch base, a silver strain which is suited to freshwater systems, but also performs well in brackish water, according to recent tests; and a red strain, which performs “extremely well” in saltwater.

“When we supply broodstock to a new customer we make sure that one member of our team is on site when the fish arrive to carry out any initial hatchery training that may be necessary,” said Bink. “After a couple of days we leave the new farmer to get on with it, returning a few weeks later when there’s a greater awareness of what training gaps still exist.”

In addition to being good ‘follow-up’ practice for the business, this approach also serves as a two-way process for the Til-Aqua team, ensuring that they understand the conditions their stock are going to be asked to perform in.

“Alongside our breeding activities, we work with our business neighbours Fleuren & Nooijen on the use of recirculation systems for hatcheries,” he said. “This is a pretty standard process in Europe, of course, but more of a challenge once you add in the sort of production challenges present in Africa or South America.”

“In that context, a highly sophisticated recirculation system is simply too costly to consider for tilapia production as it would use too much electricity. Some farmers are therefore looking at cultivating algae within a pond system and using the algae as a bio-filter to reduce some of the water cleaning and water exchange requirements.”

“In certain conditions that can allow part of the hatchery work to be pond-based, rather than contained indoors as we would do in Holland. You can potentially do the spawning in the pond, for example, keeping the overall electricity demand much lower than would otherwise be necessary.”

Water replacement in some Nigerian units is extremely low, sometimes resulting in fish being kept in what Bink described as “almost stagnant” water.      “You simply have to work in different ways in such conditions; certainly different to how we operate in Europe,” he said. “That means accepting a water replacement rate of only 5-10% a week, while employing aerators, algae and other materials to keep the water as usable as possible. Even then, stock density will often be as low as 10 fish per sq. metre.”

As for hormone usage in relation to tilapia, Bink said that quite apart from the potential damage this might cause to the species’ global reputation, his company’s non-hormone processes delivered much more consistent results. “We use temperature alone to create our all-male producing broodstock and have a success rate of above 95%,” he said. “While hormone use in breeding can also produce 95% at times, the result is more usually in the 80-85% range.”          “Another problem with hormone usage is the negative effect of testosterone on the development of the immune system of the fish. In addition, sex-reversed females, due to hormone treatments, are phenotypically male but genotypically still female. This means they will produce all female offspring in nature, either through escapees or in restocking programmes.”

“As a hatchery owner who regularly travels the world, seeing many production systems in many different countries, I remain enthusiastic about our industry and its potential. At the same time, however, I’ve become increasingly convinced that we can’t ignore the challenges that exist globally, even though they may be taking place a long way from our own home base.”

The key motivation behind Til-Aqua’s focus on breeding all-male producing tilapia broodstock is the fact that the company’s male fish grow at twice the rate of females over their first 300 days. They also have a significantly lower feed conversion ratio.

The broodstock which produce the all-male offspring do so because they have two Y chromosomes, rather than the usual XY combination.

The YY males are then crossed with females (XX chromosomes), resulting in an almost 100% population of XY males. These are Natural Male Tilapia (NMT), the trade name used by Til-Aqua.

It is these YY males, together with one of the Til-Aqua female line, that are sold to tilapia hatcheries.

Til-Aqua emphasizes that this is an entirely environment-driven process with no use being made of hormone treatments, a process which is banned, in any case, under EU legislation.