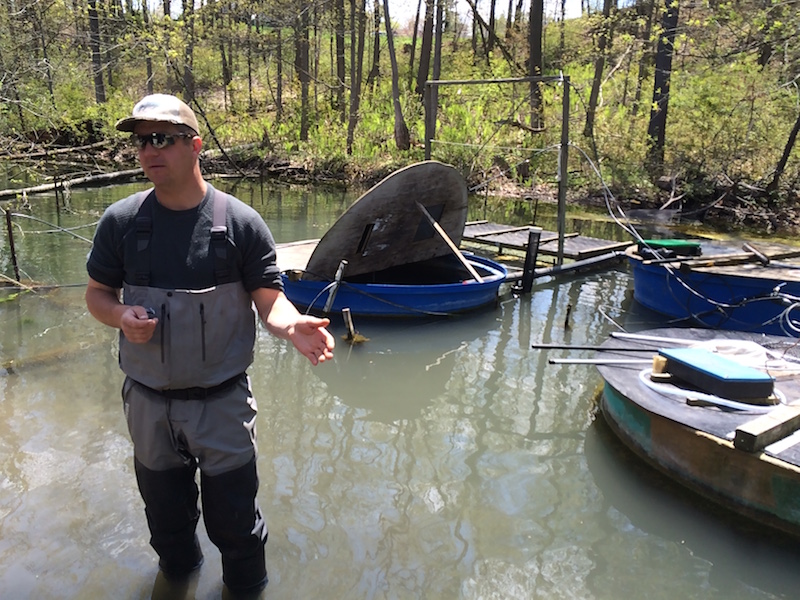 Most hatcheries which maintain operations outdoors have a perimeter fence to keep out both trespassers and predators. The Credit River Angler Association (CRAA), which maintains a trout and salmon enhancement hatchery on the Credit River in Georgetown, Ontario has taken a different approach to exclusion.

The landowner who donates land for the hatchery did not want to erect a perimeter fence. And since the hatchery is in a central location along the river in Georgetown, the lack of fencing created a potential issue for fish theft. Being a small not-for-profit, putting up buildings and doing construction was just not feasible so another solution was found, a medieval solution.

By placing the hatchery tanks in a pond near the river, the CRAA designers essentially created a moat to protect their stock. In order to assail the fish tanks a would-be thief must cross the 10 feet of moat which stays at a cool 12-130C even in the hottest part of the summer at a depth of three feet.

Without waders, only the most determined besieger would make the attempt. A large artesian spring provides water for the pond and provides a gravity feed for the tanks. This cool spring allows temperatures to be kept at a 100C in the fish tanks despite rising temperatures of the Credit River in summer.

Even during winter months, the moat is effective. The pond never freezes around the hatchery tanks, even during the coldest nights of -25oC and is enough to deter fish thieves.

When asked if there have ever been any detrimental issues with the moat system, CRAA hatchery manager Joseph Ward indicated that other than some tweaks to the drain design, “it’s been all benefits,” the system has been excellent, excluding trespassers and producing excellent fish.