Drs. Kurt Gamperl and Mark Fast, from Memorial University (MUN) and the University of Prince Edward Island – Atlantic Veterinary College (UPEI-AVC) respectively, are leading a project that is currently developing new biomarker tools for Atlantic salmon (Salmo salar) aquaculture in response to global climate change. Gamperl describes the goal of the program as, “Work[ing] collaboratively with industry to prepare them for rising water temperatures and other changing environmental conditions.” 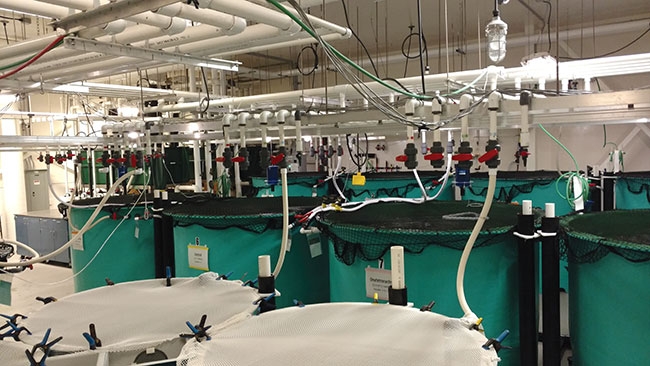 A large group of partners are involved, with Dr. Brian Dixon from the University of Waterloo, Dr. Matt Rise also from MUN, Dr. Roy Danzmann from the University of Guelph and teams from Somru Biosciences, the Huntman Marine Science Centre and the Center for Aquaculture Technologies Canada all playing different, but critical, roles in the research. Six graduate students and four post-doctoral researchers are also committed to the project.

Work officially began in 2016 and research trials are expected to continue until at least 2021. Examining the Atlantic salmon’s response to elevated rearing temperatures and low oxygen was the first step, as researchers wanted to mimic the natural pattern observed at sea-cage sites. Now the research group is interested in measuring the salmon’s response to infectious salmon anaemia virus (ISAv), sea lice and bacterial kidney disease (BKD) under these suboptimal conditions.

The results of these experiments are being used to identify genetic markers that the industry can take advantage of in their broodstock and/or management programs to enhance growth performance, fish welfare and pathogen resistance. Discovery of protein biomarkers is also leading to the development of new diagnostic assays, which will allow for the screening of blood samples to assess the overall health of a fish.

Fast explains why this research is important even to those farming on-land, “In terms of hatchery producers, it is still informative and useful to identify markers related to growth and immune responses to diseases present in the hatchery. We can also identify temperatures that pathogens do not do as well in, which could be very useful for hatchery management.” An early finding is that while Renibacterium salmoninarum (causative agent of BKD) grows well on a plate at high temperature, it appears that inside of a fish, it does very poorly. This information could influence the production strategies farmers use to mitigate their risk of disease.