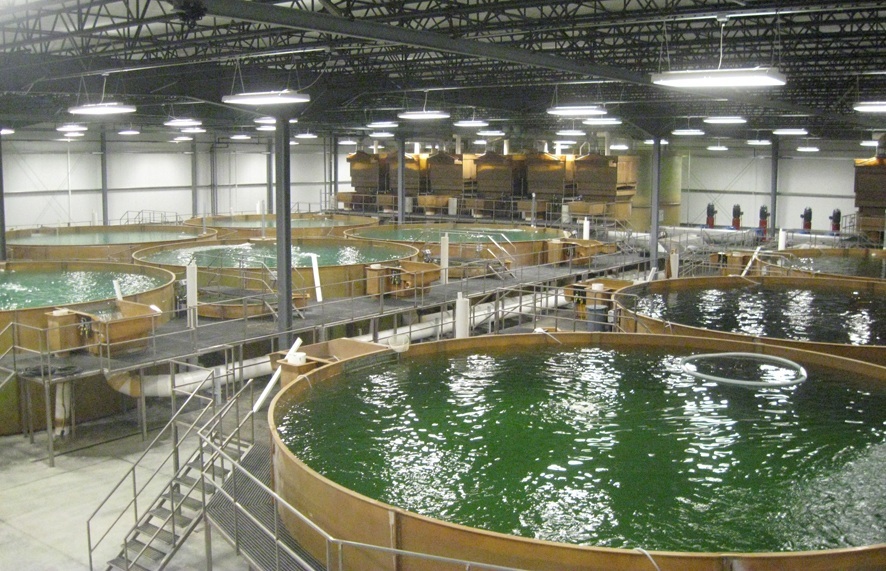 By Steven Summerfelt and Norman McCowan

Bell Aquaculture, located at Redkey, in rural Indiana, is the world’s largest producer of yellow perch (Perca flavescens). The company has closed the perch lifecycle in land-based, closed-containment systems, and production is fully vertically integrated. It controls the broodstock, spawning, incubation, fry culture, growout, and year-round harvesting, processing and marketing of value-added fillets.

The new broodstock, fry, fingerling, and growout systems were all designed by engineers from The Conservation Fund Freshwater Institute, Shepherdstown, WV, and built by Aquaculture Enterprises of Ashley, Indiana. The design optimizes the production environment (temperature and water quality), excludes fish pathogens and avoids the use of antibiotics, minimizes water use, and practically eliminates pollution of receiving waters by the capture and reclamation of nutrients that would otherwise be wasted.

All of the new production units use circular dual-drain culture tanks for fingerlings and growout. Water exiting the bottom-center drain of each tank first passes through a radial flow settler and is combined with water exiting the tank sidewall drain before entering the microscreen drum filter. The screened water then passes in sequence through fluidized-sand bio-filters, forced-ventilated cascade aeration columns, and low head oxygenation (LHO) units before flowing by gravity back to the culture tanks. Ozone and oxygen feed gas are added to the recirculating flow in the LHO units to maintain oxygen concentrations at saturation in the culture tanks.

The fish are fed to satiation using diets formulated by fish nutritionists to reduce the input of marine proteins and lipids, without compromising growth performance, or the overall lipid content of the fillet. The non-marine constituents are derived from soy beans.

Waste as a resource

Waste from the fish processing line is converted into an OMRI-listed organic fertilizer (FishRichTM). The exact recipe is proprietary because it took two years of research to refine, but it begins by collecting the fish processing residuals while they are still fresh.

FishRich is produced in a batch process that starts by acidifying the fish residuals in a process that solubilizes proteins, fats, and connective tissues. The emulsified slurry is then filtered to remove bones and scales and blended with water to create an exact 2-2-2 (N-P-K) liquid organic fertilizer, which is bottled and sold by the quart or gallon to home and garden shops, and directly to consumers via the internet.

Dealing with the production facility’s point source of waste has required installing systems to capture, dewater, transfer, store, and reclaim (i.e., sell) the nutrients that are found in the concentrated waste bio-solids. The majority of these bio-solids are produced in the farm’s single fingerling system and eight grow-out systems, which are housed in a new building. The waste bio-solids (feces and uneaten feed) discharged from all the recirculating culture systems are concentrated either in the system overflow, the drum filters, or the radial flow settlers’ backwash.

The combined bio-solids flow averages 200-400 gal/min (750-1500 l/min), and flows by gravity through under-slab piping to a lift station that pumps the solids to the new Nutrient Capture Facility. Four 13 ft (3.9m) diameter gravity-thickening settlers (all piped in parallel) are used to capture and dewater these bio-solids. The bio-solids captured in each settler undergo compression-settling at the base of each settling cone.

Research at the Conservation Fund Freshwater Institute on a similar fish farm waste-water system showed that these gravity-thickening settlers can capture 92-96% of the suspended solids, and dewater them to a slurry that contains about 10% solids (dry weight).

The bio-solids slurry is currently being sold to grain or soy farmers, who haul the liquid to nearby corn and soybean fields and apply it at agronomic rates. If fields are flooded or frozen, the slurry is stored in a lagoon located adjacent to the nutrient capture facility. This off-line storage structure has an impermeable liner and no overflow, and will store the slurry until it can be sprayed on the land.

At full production, the gravity thickening settling system is expected to reclaim almost 1 million gallons (3,800 m3) of concentrated slurry annually. To reach additional markets and minimize hauling costs for these reclaimed nutrients, Bell Aquaculture is investigating technologies to further dewater the bio-solids slurry into a cake that can be sold directly to consumers, horticulturists, or row-crop farmers.

Filtered waste water from the nutrient capture system is passed through an engineered wetland for ‘polishing’ to meet NPDES standards prior to final discharge.

About the authors: Steve Summerfelt is Director of Aquaculture Research at the Conservation Fund Freshwater Institute, Shepherdstown, West Virginia, and can be reached for more information at: s.summerfelt@freshwaterinstitute.org. Norman McCowan is President of Bell Aquaculture, and can be reached at: Norman.McCowan@bellaquaculture.com.