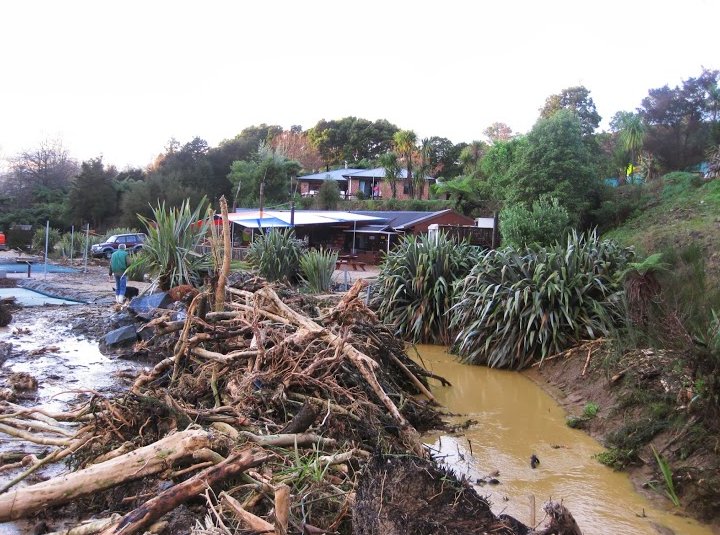 A land-based salmon farm and hatchery in the Nelson area of New Zealand has bounced back after coming within an ace of being obliterated by a landslide early this summer.

The popular facility reopened in just three months, thanks in large part to the quick action of its owners in successfully saving thousands of fish and eggs in the farm-and-hatchery unit.

Co-owner Jan Dissel, who operates the Anatoki Salmon Farm with his wife Gerda, said the damage was immense and it was initially thought that pretty much all production had been wiped out for at least one and a half years.

Dissel said, however, that with the help of many volunteers who pitched in to assist the couple they have been able to reopen the operation in about three months.

Initially though the owners of the Golden Bay operation had to fight overnight to salvage the battered remains of their land-based Chinook salmon farm, after horrendous rainfall caused a landslip and build-up of dirt and debris that blocked two culverts under a road close to the site’s fishing lake.

That caused the lake and the first of three rectangular breeding ponds to be completed covered with dirt and other material. The next breeding pond was about half-covered, and the third received some 10-15 cms of silt and dirt on the bottom.

Dissel had to take emergency action to save between 60,000 and 80,000 salmon eggs and salmon fry in the hatchery building after the vital water supply was cut-off by the slide.

Fortunately, he said, the material didn’t enter the building, so the juvenile fish inside the hatchery were left alive after the slide. He was able to save all but a few by rapidly diverting fresh water to the hatchery unit by duct-taping guttering from the roof of their house and “piping” rainwater into the facility with the aid of a Coca Cola bottle that Dissel adapted to act as a funnel.

Mud and other slide material came up against the outside wall of the couple’s home on the property but didn’t enter it.

“We have worked so hard for eight years, and now it’s all gone,” Dissel was quoted as saying immediately after the slide.

But things didn’t work out quite as badly as initially feared: the couple lost about 35,000 fish that it hadn’t been possible to insure, but everything except the livestock was covered by insurance and Dissel said he thinks the damage will likely amount to about $300,000 NZD (a little over $251,000 USD).

The salmon farm on the river started 15 years ago as Golden Bay Salmon Fishing and began trading as Anatoki Salmon Farm in July 2001. The Dissels bought it in 2005 and grew it into a tourist “hotspot,” where visitors could catch their own freshwater salmon.

Dissel said there was a large turnout for the reopening in mid-September when there were two live bands and salmon tasting for attendees.