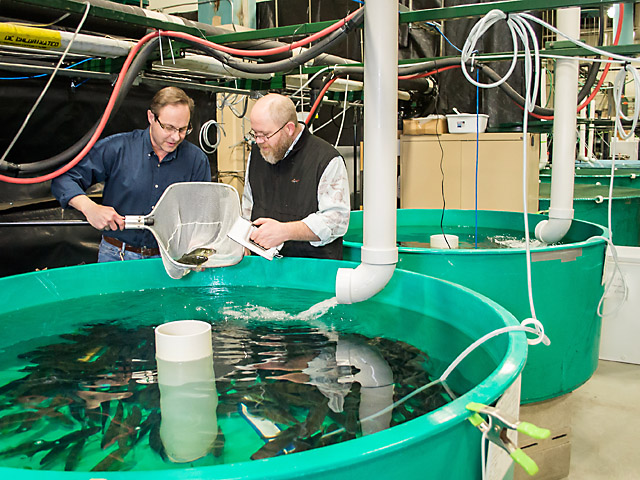 Identifying the need for farming yellow perch and describing the potential value of yellow perch culture was easy; however, accomplishing the desired goal in a financially sustainable manner has proved elusive.

An early discovery that female yellow perch grow faster and bigger has been the starting point for a considerable amount of research. However, knowing about this growth difference and using it to advantage for commercial aquaculture has not been accomplished. If the fish are two years old before their sex can be determined, it’s really not very important.

Recently, Dr. Brian Shepherd and his research colleagues at the USDA Agricultural Research Service (ARS) Dairy Forage and Aquaculture Research Unit in Milwaukee, Wisconsin, and collaborators at the University of Wisconsin-Milwaukee School of Freshwater Sciences, developed a protocol to make more efficient use of this difference in growth rates.

Factors such as size of the fish and its geographical origin can affect external characteristics related to yellow perch gender. Therefore, the scientists examined yellow perch strains from four different geographical areas. Female and male characteristics that could be confirmed in yellow perch of various sizes were identified. The method that evolved involves a checklist of observable characteristics, including the size of the fish, as well as the shape and color of the anal and reproductive openings. The process is fast, easy, reliable and more than 97% accurate in fish above three inches in length. In addition to selecting young fish for grow out, the new system allows producers, as well as research scientists to identify the largest, fastest growing females and males for producing the next generation of yellow perch.

In a related study, Dr. Shepherd and his colleagues, identified 28 genes that are responsible for the actual molecular mechanisms by which estrogen promotes more rapid growth of female perch. In their indoor tank study, the researchers fed perch standard diets supplemented with estrogen. After three months, the perch that received estrogen-supplemented feed were much larger. The scientists then sequenced genes from the fish livers to develop an understanding of the actual molecular mechanisms by which estrogen promotes growth and the differences between males and females. (Estrogen is not fed to fish in commercial production. The researchers only used it to trigger genes that control growth.) Understanding the involvement of these genes in growth, and possibly in other commercially important traits, should help breeders boost yellow perch production efficiency.

Brian Shepherd and Timothy Paul select yellow perch from a tank for traits desired in breeding. (Photo by Robert Colletta.)