The oyster industry in New Brunswick, Canada, faces a best-of-times, worst-of-times scenario as it moves into the next decade. The Canadian province aims to grow the industry by 10 per cent annually over the next five years but concedes it has limited options for ensuring spat supply. 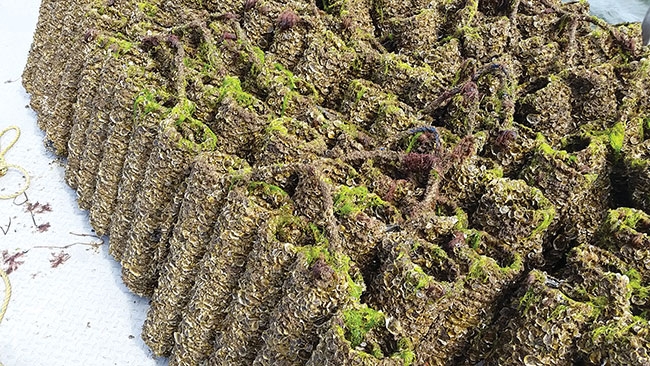 Wild spat on coupelles. Availability of seed varies from year-to-year based on conditions.

Only one commercial hatchery serves the province’s 90 oyster farmers. The industry is primarily dependent on seed supply collected from the wild. Oyster growers rely on three major water bodies for spat supply — Caraquet Bay, Bouctouche Bay and Cocagne Bay. Oyster seed collection is typically done with Chinese hat collectors, drain tiles and coupelles, usually from mid‐July to early/mid-September, but availability of seed varies from year-to-year based on conditions.

“People are getting nervous about what the wild can provide. Hatcheries will become more and more popular in serving the industry in the future,” said Marie-Josée Maillet, coordinator at New Brunswick’s Department of Agriculture, Aquaculture and Fisheries.

It acknowledged that “the fact that enterprises are very dependent on spat collection in the natural environment” is a cause for concern among producers. It pledges to support the development of hatcheries or nurseries when business rationale is demonstrated. Support for research and development projects that aim to produce spat that meet producers’ needs, and those that assess the performance of hatchery-produced spat is also at hand.

Wild spat on coupelles. Availability of seed varies from year-to-year based on conditions.

The wild will likely remain the go-to resource for seed supply in the meantime. The province has outlined strategic actions to help oyster farmers, among them a project with Fisheries and Oceans Canada (DFO), to develop a management framework for spat collection in the natural environment. It also encourages associations to develop an information-sharing website where farmers can post their spat requirements or offer spat for sale.

Still, “demand is greater than what oyster farmers can produce right now,” said Maillet, adding that New Brunwick’s oyster industry is currently operating at only 20 percent capacity. “The industry is still growing, there’s still room to grow, all our sites are not at capacity but once they are, that’s going to be our biggest challenge,” she said.