Established on the edge of Lake Wendouree in 1873, the Ballarat Fish Hatchery is the oldest in mainland Australia. Managed by the Ballarat Fish Acclimatisation Society, it was established “to introduce trout, (redfin) perch and other English fish into Ballarat district waters.” 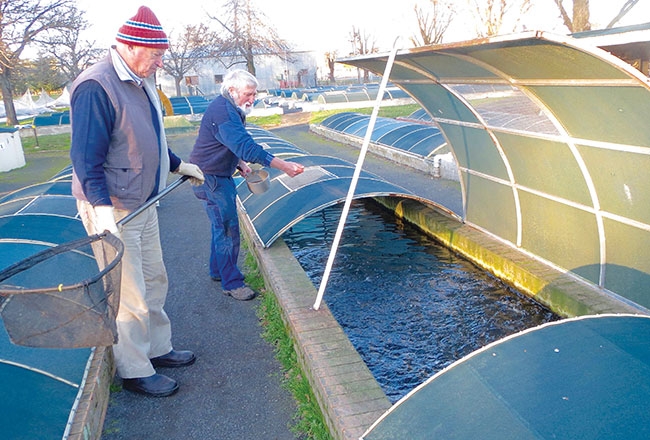 The Society, in cooperation with Fisheries Victoria until the establishment of their own Snobs Creek hatchery, pioneered stocking of European game fish in Australian waters until the mid 1950s. It has sent fish and ova to neighbouring states and as far away as South Africa, Sri Lanka, New Guinea and several Pacific Islands.

Ballarat is at the western end of Victoria’s Central Highlands. The hatchery draws its broodstock from a wide range of local waters and is highly respected for the integrity of its genetic base. It supplies fish from fry to yearlings. Once Australia’s only English perch (Perca fluviatilis) supplier, this species has been declared noxious, being a carrier of the so-called redfin disease (epizootic haematopoietic necrosis virus – EHNV). The facility now produces 300,000 rainbow trout (Oncorhynchus mykiss) and 200,000 brown trout (Salmo trutta) fry each season, plus growing out 100,000 yearling rainbow trout.

The rainbows are easier to handle and more productive in the hatchery. However, angling purists feel the browns provide more of a challenge. They dwell deeper in the water and have retained their cagey, wild nature. They live longer, but are also more prone to disease. Because of their greater domesticity and their broader range of natural food options in Australian conditions, rainbows can be stocked in greater densities. These attributes have made them more popular with farm dam stockists.

Water supply
Water is drawn from two sources: Lake Wendouree and a bore. Not spared from global climate change, the temperature of the lake water ranges from 6ºC to 24ºC. As reported in Hatchery International recently, the Society has just installed a simple but effective cooling tower that reduces the temperature by 2ºC.

The tower also cleans the water. Taking a third of the water from each raceway each day, the water passes through four 1-cu.m. sand filters before being lifted to trickle over a membrane that cools the water evaporatively.

The hatchery pumps water from the lake in the cooler months: March to November. The rest of the time, bore water is used. The lake water is usually neutral but the bore water, at a pH of 8, is hard.

Harvesting broodstock
The Society’s high activity period is in May when gravid broodstock are trapped from several private 20-ml dams within a 30-km radius of Ballarat. The browns and rainbows are stocked together. The Society believes this natural “warehousing” allowed them to maintain the integrity of the “wild” genetic strain upon which the hatchery has built its reputation.

Every year, Society members will seine net Lake Wendouree and fyke net the surrounding dams. They harvest ripe broodstock. After examining bucks and hens of the same species they are stripped of their roe and milt at the water’s edge, washed and brought back to the hatchery and placed in the hatching jars. The brown trout eggs take longer to incubate (44 days) and they’re stripped first in early June. They run ripe till mid-July, but Society volunteer Frank Gray said the earlier spawnings – over the first fortnight – of both species yield better outcomes. They start the rainbows in mid-June and they carry through to the end of July. Their incubation period is 33 days.

As a rule of thumb, the ovary capacity of brown trout females increases with age, as does the egg size; and the larvae from larger eggs tend to have a better survival rate. In the case of rainbows, while egg size increased with age, the overall fecundity tended to fall away. Browns deliver, on average, 1,000 eggs per kilo and rainbows 1,200.

Disease problems are minimal and management is the tried and proven procedure of maintaining a stable temperature of 10ºC, high dissolved oxygen levels and giving the eggs a mild formalin dip as needed. The hatchery water is recirculated at the rate of 21,000 litres/hr, and as an added precaution, it’s passed through a bank of UV tubes.

Returns
Sale of fry begins within three weeks of depleting their yolk sacks. They are 35mm by this stage and sales continue up until they reach 200mm. Beyond this, transportation becomes problematic. Sales are restricted to south of the Great Dividing Range.

Of the 100,000 yearlings grown out, 90,000 are returned to the local broodstock holding waters and sold to people who want larger fish. The remaining 10,000 are stocked in Lake Wendouree as a gift to the people of Ballarat.

The Society has a membership of 32 volunteers, and it’s through their tireless efforts that the hatchery continues to provide a reliable supply of genetically diverse rainbow and brown trout to Australian anglers.

For more information about the Ballarat Fish Hatchery, contact Frank Gray at frankgray39@yahoo.com