The H.B. Parsons Fish Hatchery in Oklahoma is the centrepiece of a remarkable fisheries management program. The only municipal fish hatchery in the state, it is involved in a wide variety of programs and activities designed to promote fishing in the city. As fisheries biologist Bob Martin tells Hatchery International, the program is a state-level agency program, but funded by a city. 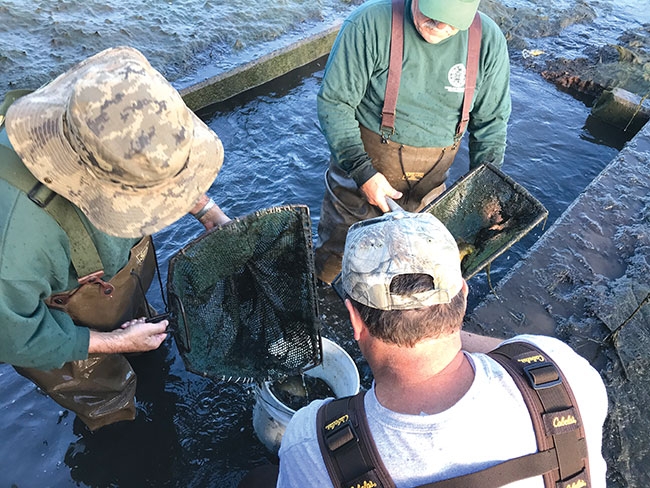 Workers from the H.B. Parsons Fish Hatchery waist-deep in their work

“We do fish management, we do our fish culture work, we do aquatic education and we do outreach,” says Martin. “We do just about anything you can think of that would involve fisheries work.”

The hatchery has a long history in the northwestern end of Oklahoma City, having been established after the creation of Hefner Lake in 1947. Over the years the hatchery fell into disuse and had been long out of operation by the time Martin arrived in 1982.

“At the time we had 10 different size culture ponds and my job was to get the hatchery back into operation and renovate it and we did that from ’82 to ’83,” says Martin. “We now have a modern fish hatchery that has six one-acre ponds with a modern water supply system; we have internal basins for our fish harvest and it’s just a much easier place to work.”

Since 1983 the hatchery has been producing fish to stock waterways in and around Oklahoma City. It raises walleye, striped bass hybrids, channel catfish and hybrid sunfish.

Through collaboration with the Oklahoma Department of Wildlife Conservation, it helps run the “Close to Home” waters program, where small bodies of water are managed with the help of a cooperator. There are three city lakes and eight Close-to-Home fishable waters available to residents in the area. But that is only the beginning of the work that the hatchery is involved in, says Martin.

“We’ve been cooperators on a couple of research projects through the Department of Wildlife Conservation’s Fisheries Research Lab in Norman, Okla. We do traditional fish management work. We do our surveys, electrofishing, gillnets, trap nets, hoop nets for catfish. We do water quality and support surveys. We also do fish kill investigations. We place artificial fish habitat in our Close-to-Home and city lakes. We review our city fishing regulations annually. We also do a lot of promoting of fishing opportunities in Oklahoma City.”

Among other key efforts are marketing and promotion, including literature such as an annual pamphlet on fishing regulations and maps showing fish habitats and fishing opportunities in the city. They also have a noteworthy program to deliver fishing lessons.

“Oklahoma City is really on the cutting edge of urban fisheries management with our program,” says Martin. “When I got here the hatchery had been closed down, but they had pieces – they had fishing classes in place. We have a number of covered fishing docks on our city lakes that were here, but we consolidated everything and put a good strong fish management program with it.”

Workers from the H.B. Parsons Fish Hatchery waist-deep in their work

Fishing lessons
Fishing classes were offered in Oklahoma City prior to Martin’s 1982 mandate to renovate and revitalize the hatchery. However, since that time, the fishing classes have been enhanced and have become a key outreach program. The primary focus is on teaching children from ages 5–15 over nine scheduled fishing classes, ultimately serving a total of roughly 600 children, accompanied by 400 adults.

“We teach basic fishing; how to fish with a worm, drop shot and a bobbler,” says Martin. “We use spin cast rods and reels. It’s a one-time class.”

Since 1990, the hatchery has also partnered with the Oklahoma City Police Department Athletic League for a program called Hooked on Fishing-Not on Drugs, which provides rods and reels for the classes, as well as literature and tackle.

For adults, the hatchery also holds a trout clinic which teaches anglers how to fish for trout.

“We go over equipment, casting, knot tying, fish cleaning, ethics and safety,” says Martin. “We have about 100-200 people go to that clinic.”

The trout clinic is part of a Sport Fish Restoration project where catchable trout are purchased and stocked in one of the Close-to-Home waters, resulting in a three-month long trout season. The project is funded through donations by groups such as the Dolese Bros cement company and the 89er Chapter of Trout Unlimited, matched by the Department of Wildlife Conservation.