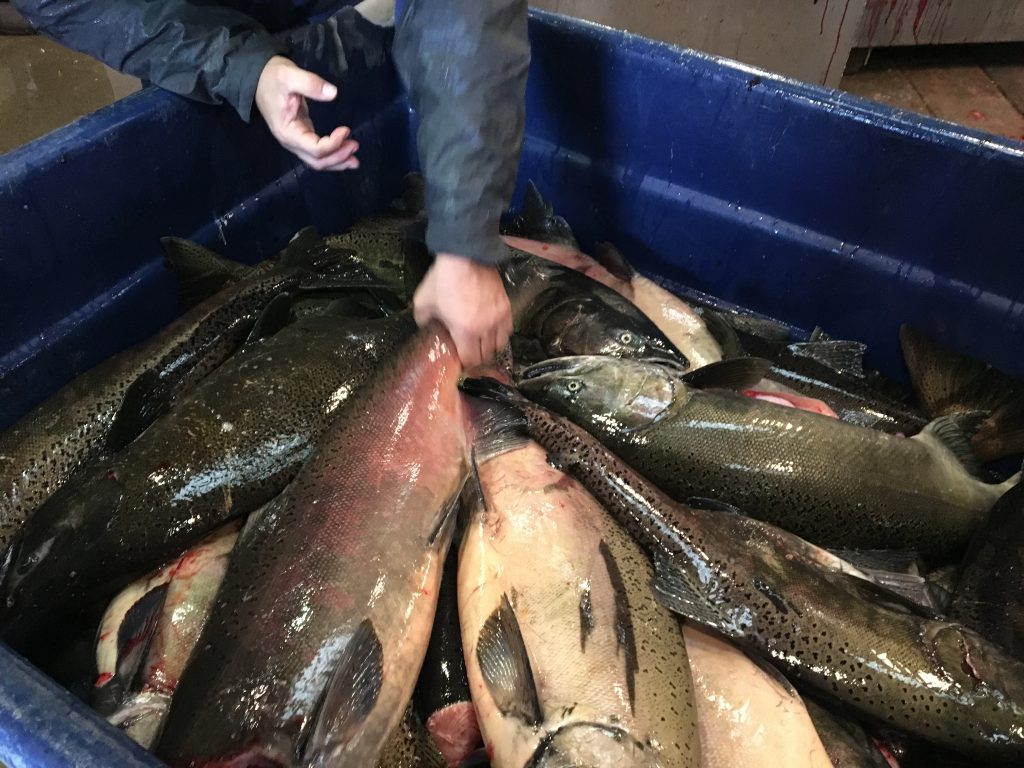 An employee at the Mokelumne River Fish Hatchery inspects a tote of spawners which returned to the river in record numbers in 2017.

Last year was a good one for the Mokelumne River Fish Hatchery in Clements, California. Over 19,650 salmon returned to the hatchery, breaking the previous record of 18,000 set in 2011. Representatives for the East Bay Municipal Utility District (EBMUD) attribute the high numbers to specific steps taken on the river and in the hatchery to make conditions favourable for the salmon.

One of the primary efforts has been river restoration, says Jose Setka, manager of fisheries and wildlife for EBMUD. A $1.3 million partnership between EBMUD, the California Department of Fish and Wildlife and the US Fish and Wildlife Service has seen roughly 75,000 cubic yards of gravel added to key spawning areas in the upper region of the usable area for salmon. These efforts brought the depth of the water to one to three feet – the salmons’ preferred level for spawning. The shallow water also creates higher velocities which the salmon prefer for making redds and depositing their eggs.

“It’s returned a tremendous benefit in terms of juvenile survival, a good spawning habitat for the adults, and being that it’s in that upper reach, some pretty darn good water quality while the eggs are in the gravel,” says Setka. “Having that clean gravel, the appropriately-sized gravel, creates a stasis within the gravel pocket that allows water to flow through, bring oxygen to the eggs, and also take away any metabolic waste products from the eggs.”

Another key effort has been a three year experiment using different methods of transporting smolts to favourable release sites. Some salmon were released into waters near the Mokelumne Hatchery, while others were transferred by barge to locations in the Golden Gate, a strait which connects the San Francisco Bay with the Pacific Ocean. The salmon that were barged out to the favourable locations survived and returned at a much high rate than those that were released in the central delta where the hatchery is located.

Setka says that this is one of the key issues that the hatchery has focused on in the past decade – the central delta is far from ideal for juvenile fish for a variety of reasons.

“We started focusing on ways where we can get juvenile fish around that central delta point, whether that’s by trucking or in this case barging,” says Setka.

As barging the salmon to preferred release areas would make the transition to saltwater more abrupt, the salmon were given a transfer diet containing more salt.

“When you’re trucking them without giving them time to acclimate, sometimes they can go through stressful periods which can impact survival,” he added. “We did some experiments with this transfer feed and it appears to have not only lowered the stress they go through, but helped them get ready to live in saltwater. Based on our initial studies that we did with a few groups it looks like it worked quite well. Now, all the fish are getting that feed.”

In 2008, Central Valley salmon stock collapsed and very few fish returned to the valley, which Setka says was an eye-opener for river managers. In response, they looked into what they could do to improve migration up the river, using pulse flows. The key is to change the flow of the river enough to cue the fish to move.

“This year we were able to get some pulses out in late September and continue those weekly, well into November,” says Setka. “That really seems to have made a big difference in terms of getting our fish back to the Mokelumne and reducing the number of strays.”

Those efforts were also bolstered by the Delta Cross Channel, operated by the US Bureau of Reclamation, which diverts water from the Sacramento River to the interior delta to improve water quality for municipal and farming usage. In response to this year’s drought and stray rate issues for the Colden Hatchery in the Sacramento Valley, Setka says that the cross channel was closed five days a week throughout the migration season.

“For us, this also improves the cue for Mokelumne fish to enter the Mokelumne system and not stray up through the cross channel and into the Sacramento and America Rivers,” says Setka. “Those two work together and we’ve shown in experimental closures that we’ve been able to arrange with the Bureau that it definitely works for us.”

The other key effort which contributed to this year’s high return was a change in release method. Prior to 2008 they would drive a truck down to the water and dump the fish in through a pipe. Setka says that this method did more favours for predators in the area than for the fish they were depositing.

“We shifted over to a net pen release strategy, where the truck releases the fish into a net pen. Those fish stay in there anywhere from an hour to two hours and get a chance to acclimate. That certainly improved things, but if we go more than three consecutive days of releases into that net pen, the predators will ultimately clue in. So we don’t do anything more than three consecutive days of releases before we take time off.”

Setka also credits a near-record year of rainfall in the area with helping the return numbers. Going forward, he says they will continue to work on improving their processes, ensuring that their release strategies and other efforts are appropriate. And they will ensure their efforts evolve over time as necessary.

“As science gets better, as the knowledge base grows, we continue to make changes,” says Setka. “I think Mokelumne is just one example of what you can do when you put those efforts into that.”