A bit of a busman’s holiday has evolved into an international development project supported by the Woods Hole Oceanographic Institute (WHOI) and a US oyster company’s charitable foundation, to support a local clam harvest industry in Zanzibar, an island off the Tanzanian coast in east Africa. 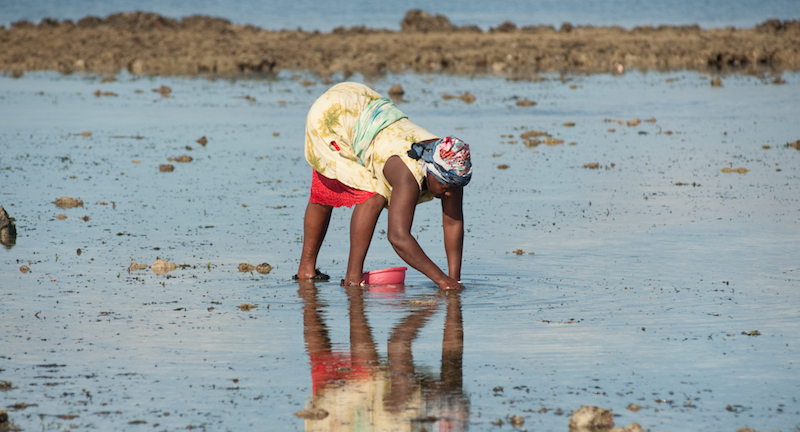 “More than 20 years ago an Israeli college instructor who was in Zanzibar on vacation stuck his nose into what looked like a marine science research station and started asking people if they were interested in aquaculture,” recalls Hauke Kite-Powell, a researcher at WHOI. “We worked on aquaculture projects in Israel and later he invited me to go back to Zanzibar with him.”

with a hatchery, growout, retail and wholesale businesses, and several restaurants. Company principals Skip Bennett and Shore Gregory launched the Island Creek Oysters Foundation as a way to give back to the industry that has been responsible for their success.

Kite-Powell lived in Duxbury, where ICO is located. As a shellfish researcher, he had friends in the business and got to know the Foundation. “The Foundation was searching for an identity for a while,” explains company president Chris Sherman. “And we became connected with Hauke.” They have been working together on projects including the Zanzibar hatchery, for the last 10 years.

As a non-profit institution Woods Hole relies on the support of private donors, but they get more than just money from the Island Creek Foundation connection. “We have a fund-raising component, but also parallel to that is helping out with expertise, whether it is on a business or a technical level,” says Sherman.

“Hauke identified this population of women in Zanzibar that were harvesting blood clams (Anadara antiquata) on a subsistence basis for their families,” says Sherman. “As with many wild stocks of shellfish, supply goes up and down and increasingly they have to walk quite far in order to do the harvest. They are spending a lot of personal energy and putting pressure on the wild resource to put not very much protein on the table”

“So the idea was that we would start a hatchery to supply a source of seed for this endemic clam with funding and expertise from our foundation and our farm crew here, and with help from Hauke who has been on the ground with the project,” Sherman explains.

The initial goal has been to provide clam seed for the local women either to ranch, or to intercrop with the established seaweed growing industry on the island.

Evolution of a plan

Kite-Powell says they are about 80% of the way to achieving their goal. “I think we have the biology worked out. What we don’t have is a reliable source of clean water to allow the seed to mature. That is going to be resolved now by building a second hatchery in a place with access to cleaner water.”

Indeed, the first hatchery in the village of Stone Town crashed when dredging of the adjacent harbor stirred up contaminants that polluted the water. “We couldn’t keep anything alive,” says Kite-Powell.

A new custom-designed hatchery on the Beit el Ras campus of the State University of Zanzibar,

on the outskirts of Stone Town should be running this fall and winter. The 25×30 foot building will have two 2000 litre seawater tanks and two 1000-litre fresh water tanks to guarantee a reliable supply. They will have generators for back-up power.

“The blood clam is pretty hardy,” says Sherman. Indeed, Island Creek has worked to raise the local New England animals in their own hatchery in Duxbury.

Kite-Powell says they have been able to get local Zanzibar broodstock to spawn fairy reliably using thermal stress as a trigger. They have worked with algae sourced from NOAA in Connecticut and also developed culture for algae species native to the region.

Broodstock are kept in 150 gallon rectangular tanks with aeration and regular water exchange. They will use 500 litre conical larvae tanks. Kite-Powell says larvae to seed is 2-3 months, with an initial goal of 20 million seed a year.

“Once we get the seed to the field site that is the natural setting for those clams and so we haven’t had issues (in growout),” says Kite-Powell. “It takes 12 to 18 months to get a good size clam.”

The year round growing season is an advantage. “You don’t have cold weather at all,” Kite-Powell points out. “There’s a little work there guarding them from predation, but that is fairly easy to do.”

Growout is left primarily to the villagers, Kite-Powell explains. Many of the women in the villages have been farming seaweed for a couple of decades. “So there is an established system for allocating plots in the inter-tidal zone,” he says. “Seaweed lines are spaced apart so that there is room in between them for bottom culture and there are other growing areas that may actually be more suitable than the seaweed plots.”

It’s a challenge to get trained and technically competent people to work in the hatchery Kite-Powell says. “We are trying hard to rely on local people, working with grad students trying to train them in the local research institute.”

“Ultimately the reason why these projects are so compelling is that we are producing protein in places that really need affordable sources of protein for people to be healthy,” says Sherman. “Employing people, creating jobs and income, is a by product of that.”

“The potential for both shellfish and finfish aquaculture in the Zanzibar region is enormous,” says Kite-Powell. “And it is just starting to get traction.”

“Really, everyone is just waiting for us to get producing seed,” says Sherman.