Lucky Clays Fresh was launched in 2011 at Norwood, North Carolina when owner Judy Carpenter expanded her existing farm to include a demonstration sized aquaponics system. 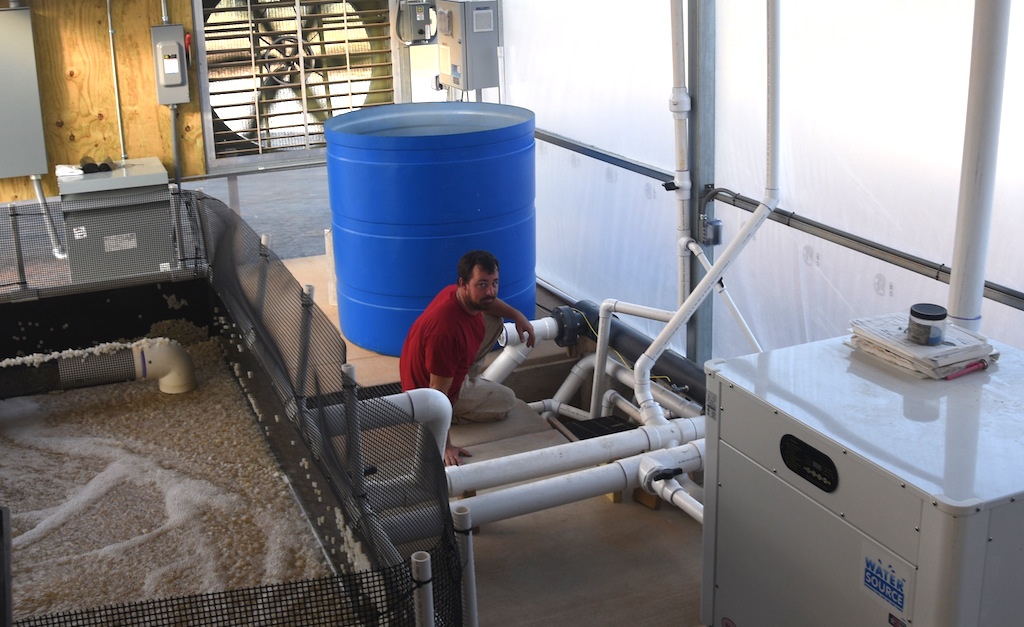 One of Judy’s driving philosophies had always been to live with the smallest impact to the environment and with that in mind the majority of the 450 acre farm and conference center is run on solar and wind power and all the new buildings are LEED certified.

In 2011 as the team discussed environmentally friendly options for a farm expansion, they decided to test a small demonstration aquaponics system.  The ultimate goal would be to expand later once they proved the viability of an aquaponics system in the area.

Throughout the design and implementation of the system, thought was always given to efficiency.  For this reason, Bradley Todd developed a gasification system.  This uses wood chip waste from local logging companies to heat and dry air in the greenhouse.

Once the demo system was proven, they decided to begin building a full scale system.  The new system includes over 43,000 square feet of greenhouse with 13,000 square feet of deep water culture, 36,000 gallons of fish rearing tanks, 40,000 gallons of bio-floc shrimp culture as well as four small research systems to test out new ideas.  The new system will be producing over 18,000 heads of lettuce per week.  The fish systems are growing, striped bass, sunshine bass and tilapia.  Cool water species are also being considered for future species.

The fish rearing systems utilize 120 micron screen filtration, moving bed biofiltration as well as oxygenation.  As the water flows to the growing beds, it is treated with UV filtration and has a side streamed mineralization loop.  Each deep water culture system is approximately 18’ x 84’ which makes it among the largest beds currently in use.  Water is ozonated before being returned to the fish rearing system after flowing through the DWC.

Lucky Clays Fresh’s customer base is asking for them to diversify which is why they are experimenting with bio-floc systems to raise pacific white shrimp.  This system consists of twenty 2000 gallon tanks and settling tanks to manage the floc population as needed.  As this system matures, they will begin testing different salt tolerant plants to grow in conjunction with the shrimp.

Additionally, they teach biannual workshops to the public in the hopes of providing information to others interested in aquaponics.  They do not sell equipment which allows them to really focus on the practical applications and day-to-day operations without concerns for equipment sales goals.  The course highlights both their successes and their failures.