It is my experience that behind every successful hatchery or farm there are some fantastic staff, both in technical skills and devotion to livestock care. Without these folks, the industry would quickly collapse. 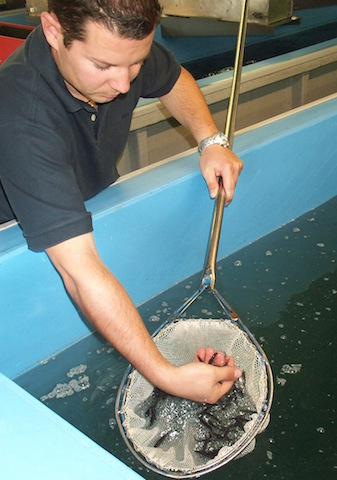 Behind every successful hatchery there are some fantastic staff. Here are five tips to help find them…..and keep them.

However, hiring is one of the most costly things to get wrong. Estimates for poor hiring decisions

range from 2.5x salary to 10x salary in hard costs. Soft costs such as the effects of poor workplace morale and productivity are estimated even higher. Think about that next time you offer to hire your neighbor’s best friend!

Some positions (personal assistant) for example, have a 20% success rate in retaining a hiree for five years. How many of the employees at your facility have been there for more than five years? How many have come and gone over the past two years (or five if you can remember that many)?

There are two overarching areas to look at in order to mitigate these pain-points and costs. The first is to implement better hiring processes. The second is to develop a system of comprehensive standard operating procedures (SOP) with feedback to (and from) management. Notice that the second is NOT to install sleeping pods (per Google headquarters) or implement radical employee incentive programs. While these things may have a positive effect on employee retention or performance, most reports I have seen show that the effect of these incentives is negligible as compared with simply providing meaningful work to an employee.

What is meaningful work? There is an old story about a man who asked three bricklayers what they were doing. The first one said he was “putting one brick on top of another.” The second said he was “making six pence a day.” The third replied, “I am building a cathedral – a house of God!” Which one would you expect to show up every day? Which one would you expect take the most pride in his work?

Aquaculture employers are blessed with the ability to provide very meaningful jobs. Fish may not be the most cuddly creatures, but there is an inherent joy in interacting daily with creatures that depend on your care and nurturing to thrive and to grow – and then there is the miraculous gift of reproduction we can be part of almost every day in a hatchery position.

Even the most menial job at a hatchery can be linked to the well-being of the fish. If that is not enough, many aquaculture facilities can claim to be taking pressure off of wild stocks, or to be providing good jobs in rural communities, or to be feeding the world with high value protein that requires less water than beef to produce.

Conserving endangered species, conserving water, feeding the world! When you and/or your employee shows up for work are they putting one brick on top of another or feeding the world? It may not be feasible to dictate to your employees what the meaning is in their jobs, but our own passions for what we do are going to be picked up by those around us.

These concepts are widely applicable and could be adapted to almost any industry. If you take one thing away from this article, let it be that hereafter you only hire people that are smarter than you and conscientious. Those two criteria will take you far. These employees will bring you solutions rather than problems. They will have your back. At the end of each day they will walk out the door backwards with both eyes on the fish rather than on the clock.

Many job postings are filled with vague and broad language. This is a costly error. A job posting that says “cleaning, grading, monitoring, ability to work alone or as a team, experience an asset” will get hundreds of applicants with an equally vague and broad work and skills experience. Take the corporate-speak vocabulary out of the posting.

Rather than trying to cover every base, write a job posting that is polar opposite. Describe as specifically as possible and in as great a detail as possible what the successful applicant will be doing on a daily basis. If you can’t do that, you are not ready to hire somebody! Rather than “cleaning,” say “cleaning fish tanks to meet biosecurity standards.” Rather than monitoring say, “Daily check that water treatment equipment is functioning properly” and “Daily check and manage water quality such as oxygen, temperature, pH, ammonia and record values.” These are some examples of how your job posting can discourage applicants who really have no experience or skills for the position.

There is one more key piece of a job posting that is simple but very powerful. Ask the applicant to do something very specific. For example, “Submit resume and cover letter by email to hr@fishfarmlifer.com with subject ‘Attention Hiring Manager Hal Abbott.’ No calls please.” If an applicant cannot follow this simple instruction and submits a resume via a different method, there is no need to consider it. He or she has just demonstrated how well they follow directions at a time when there is the most incentive to do so.

I heard of one company which knew there would be a lot of interest in a position and charged $25 for each applicant to submit their resume. Powerful disqualifier, but for a good paying job, it meant only candidates with relevant experience and skills would be applying.

The next step in the hiring process is the interview which should be followed by a thorough reference check. However, the most successful way to hire the right person is by audition. Have the top two or three candidates join you for a day or for however long is needed for you to observe if they are a good fit. Why shouldn’t they demonstrate that they can do the job you are hiring them for? If it costs you $100 to bring them in for the day and discover they think “fish poo is icky,” I call that money well spent.

Standard operating procedures (SOP) are a useful tool to accelerate training, to prevent loss of IP should an employee move on, to maintain standards, and to transition from an entrepreneurial job to a “real business” that could be operated even if the entrepreneur was ‘out sick’ or sold the business.

What should be written up as an SOP? The answer is not ‘everything.’ Focus on daily tasks. These could be checklists on the wall next to a piece of equipment where the operating pressures are recorded, or in each culture area where oxygen and temperature are recorded at set times each day.

If a new employee is unable to do the task without asking a question, the SOP should be revised to answer that question.

If an employee is able to complete the task successfully the first time, without asking a question, a $50 incentive should be paid to the SOP author. This measure creates a robust SOP the first time around. You may also discover that an SOP does not have to be text only! Charts and pictures are powerful tools for creating an effective SOP.

If a breakdown occurs (anything that goes wrong), take a moment to ask staff how it could have been avoided and correct the SOP.

Other than the obvious elements of an SOP (how and when to do task X), every SOP should have a feedback mechanism. This is as simple as a sheet that the employee initials when the task is completed. Perhaps time and date would be included as well. I suspect that as farms become larger, the feedback will become electronic. Farm management software exists and will be an asset and a necessity on all but the smallest operations.

It has been said that “every problem is a people problem.” Everyone is unique. You may hire somebody to replace an employee that moved on and find that the same job gets done in a much different way. Perhaps better, perhaps worse, but entirely different. For example, one manager I had would approach most problems by first saying, “let’s go for a walk” and head off to the section of the farm that needed some attention. Given that we were both very hands-on in our approach to problems, this worked very effectively. Another manager had a ‘shotgun approach’ and would download me with a multitude of ideas in a five minute conversation. This method became effective over time as I realized that I was not being told how to do something, but being left to determine which ideas had merit and select or advise on what could be followed through to completion.

It is my understanding that there is no right or wrong way to approach “problems” or “tasks” or “jobs.” In my own company, we use a tool called the Kolbe A index to determine in which areas we are weak or strong as a group. The Kolbe A index “measures your instinctive way of doing things and the Result is called your M.O. (method of operation)” (quoted from the Kolbe A website www.kolbe.com). If you are a manager, go take the test now.

There is an established industry of hiring consultants. Some now use the Kolbe tool to help companies hire staff appropriate for both the company and the given position. It has been found that in a business with one principal owner who is heavily involved in the daily operations, the combined scores of the staff will match the owner’s Kolbe score. This means everyone likely gets along, but if everyone is high “quick-start” (common in entrepreneurs), but nobody is a high “follow-through,” there will be a multitude of projects started and a rare few finished. The reverse scenario, may lead to projects being completed simply because they were started… even when they should have been dropped at the first sign of low or negative ROI.

For example, my office manager and I are both high in the “fact finder” category and low in the “quick start” category. As a result of being aware of our Kolbe index, we now know to set a deadline for making decisions. Our previously often repeated cycle of researching for 80% of the project time and then making last minute decisions has evolved to a more balanced approach where we set a time limit on the research or fact-finding phase.

As RAS farms are increasing in size, key people with knowledge and experience to ‘do it all’ are becoming rare. This may become a severe bottleneck if there are only two or three key individuals to operate a large 24/7/365 operation. Good hiring practices and tools will have to be implemented with good management tools to successfully fill this gap.