Features Research
Taking a new look into an old problem 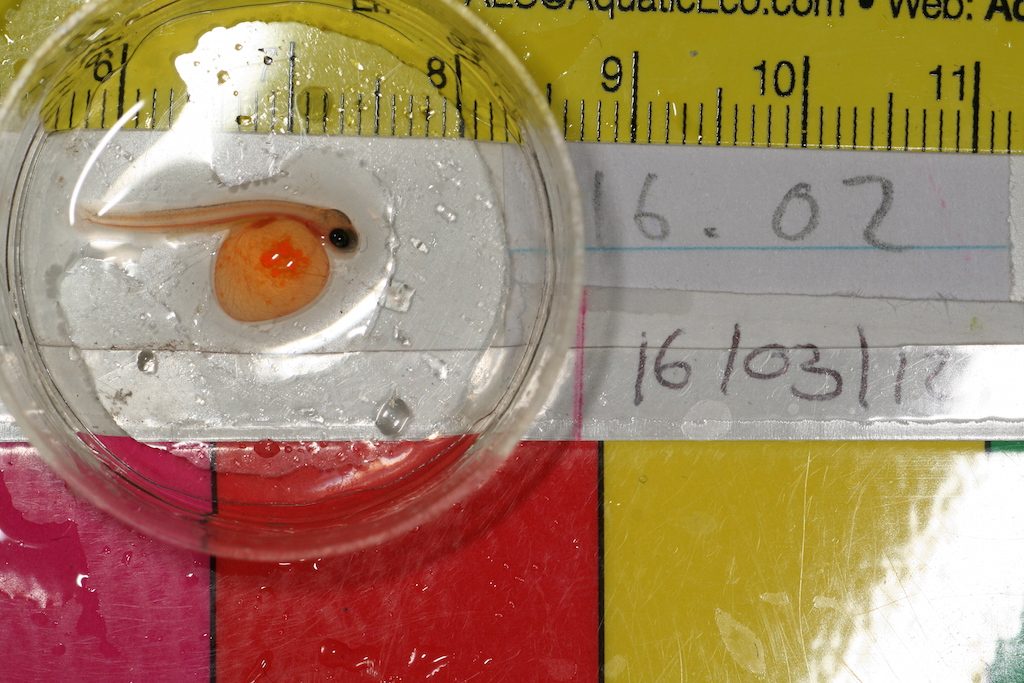 Pilot data from a study on Atlantic salmon eggs and alevins indicate that stress experienced during embryogenesis may have fitness implications later in life.

The study, funded by Research Council UK, is the first one to apply epigenetics to disease management in fish farming.

The funding allowed Garcia de Leaniz and his team “to take a new look into an old problem.” He said, “It has long been known that conditions experienced during development can have profound effects later in life, for example, by making animals more or less susceptible to parasites and diseases.

The problem is that we don’t really know why or how, although we suspect that epigenetic changes may be involved.”

He presented the study at Aquaculture Europe 2016 in Edinburgh, Scotland last September.

“Aquaculture intensification is likely to be constrained by the capacity of species to cope with stress, particularly under predicted scenarios of climate change, because thermal stress has profound effects on fish reproduction and early development. Stress experienced at critical times during embryogenesis, at a time when the immune system is still developing, is likely to affect the ability of fish to cope with pathogens and respond to subsequent stressors later in life,” Garcia de Leaniz cited in the abstract.

The team looked into the effects of early stress on fish health and fitness, and assessed the role of epigenetic programming and the expression of immune-related genes on subsequent resistance of Atlantic salmon to Saprolegnia parasitica, a pervasive pathogen of salmonids under aquaculture conditions in freshwater.

“Our general hypothesis was that stress during early life would impair the health and fitness of Atlantic salmon, and subsequently compromise their ability to resist infections by altering the expression of immune-related genes through changes in the epigenome,” he cited.

As part of the study, Atlantic salmon eggs were temperature-shocked during embryogenesis and monitored over four to five months.

“The salmon eggs were incubated at 9°C but were then briefly cold-shocked and exposed to air over a week,” he told Hatchery International (HI).

Asked about the ideal temperature range for Atlantic salmon eggs during embryogenesis, Tamsyn Uren-Webster said, “Temperature varies considerably throughout the geographical range of Atlantic salmon, and the thermal tolerance of different populations may also vary. Faster development occurs at higher temperatures, eight to 10°C, while larger alevin size is typically achieved at lower temperatures, two to 4°C. Several studies have reported that survival decreases above 12°C.”

The impact of stress on health and fitness was assessed by monitoring growth rate, and measuring the extent of fluctuating asymmetry in salmon alevins.

Gut health was also investigated using 16S rDNA sequencing to examine potential stress-induced changes in gut microbial community diversity and structure. 16S rDNA is a section of the prokaryotic DNA that codes for a gene found within all bacteria.

The effect of stress on disease resistance was tested by investigating susceptibility of salmon fry to experimental infection with a bacterial lipopolysaccharide.

Alevins derived from temperature-shocked eggs had significantly lower body mass and lower expression of the ghr1 gene that regulates the growth hormone receptor, and of the dnmt1 gene, the gene that encodes enzymes responsible for cell maintenance and global de novo methylation activities.

Preliminary results indicate that exposure to bacterial lipopolysaccharide had a noticeable effect on expression of immune-related genes.

While the temperature shock they applied had no effect on embryo/alevin survival or hatching rate, Swansea University researchers found evidence of “reduction of growth” and “some modulation of the immune system.”

Uren-Webster told HI, “At three months post-hatch, we also found a considerable effect on gut and skin microbial community composition, with increased relative abundance of specific groups of bacteria known to be related to stress.”

Overall, the pilot data indicated that stress experienced during embryogenesis may have fitness implications later in life, suggesting a potential role for epigenetic programming.

“Embryogenesis is a sensitive period to stress, in part, because it includes re-programming of the epigenome. We hypothesized that the effects we observed on the immune system, at three months post-hatch, may be due to disruption of the epigenome caused by stress during embryogenesis, and we are currently investigating this,” said Uren-Webster

She stressed that the knowledge of the effects of the stress on the epigenome and how this is involved in regulating the immune system will be beneficial for management in aquaculture in several ways.

“For example, this may help identify periods of development that are particularly sensitive to stress and epigenetic disruption. It is also possible that mild stressors may have positive effects on future health by boosting the immune system through epigenetic regulation,” she said.