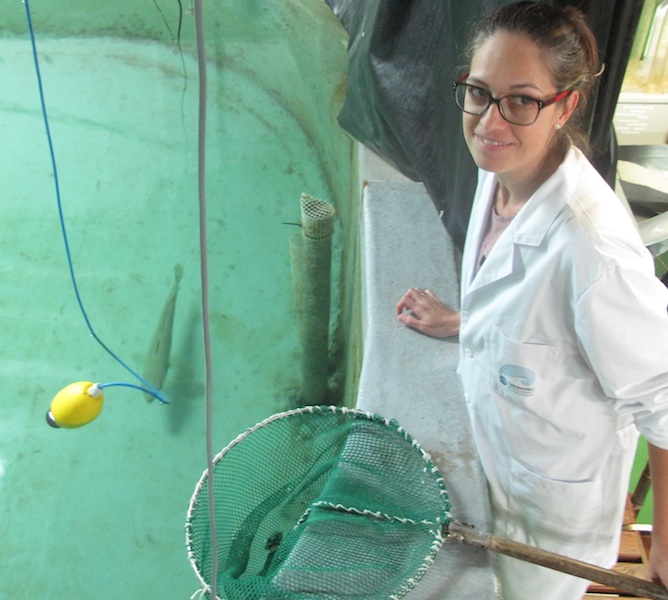 Dr. Montse Pérez and her colleagues are working on the hake kariotype and determining the isotopic fingerprint of embryos. Dr Montse Pérez hopes that soon she will be able to close the life cycle on European hake

Important data on the adaptation, feeding, growth, reproduction, and larval culture of hake is scheduled to be presented by Dr Montse Pérez at the XVII Forum of Marine Resources and Aquaculture from Galician Estuaries, early in October. Pérez is the lead researcher at the Vigo Oceanography Centre of the Spanish Institute of Oceanography (IEO).

Perez told Hatchery International that she’s hoping she will soon be able to close the life cycle on European hake, a popular food fish in Europe, particularly in the southern part of the continent.

European hake have been on the decline for some years, and it was this that led to the establishment of the Culmer Project under researcher José Iglesias. The project ‘Husbandry of European hake farming: juvenile specimens capture and adaptation’ began in 2007 and ended in 2012, when the project met its proposed objectives.

Pérez has continued the work for the past few years, in the Genmol and Genmol2 projects financed by the IEO

“We are working on the hake kariotype and determining the isotopic fingerprint of embryos, that is, what legacy isotopic the mother leaves for larvae and whether it has any connection with the fact that the spawning is more or less viable,” Pérez explained.

Spontaneous natural spawning from the broodstock year-round has been achieved by maintaining the water temperature in the tanks at a constant fairly low temperature of 10-12°C, a temperature which is raised to 14° to trigger spawning.

Pérez said European hake apparently start to mature at between two and three years old and that between 600,000 and a million eggs can be put out at a time. The IEO has been using genetics for sorting the fish by gender, she said.

Pérez and her colleagues observed and identified two fundamental problems with hake. The first was the inconsistency in the formation of liquid droplets in the larvae. The droplets are a crucial source of food for the developing embryo but also for the early larval stages, until the larvae open their mouths after about six days.

Unfortunately, Pérez explained, a high percentage of embryos did not have that oildrop of grease well attached and vascularized, with the result the larvae aren’t as well fed as they need to be. Consequently, by the time the mouths open, “we find them very weak,” Pérez explained.

The second problem was found in the larval stage where the juveniles didn’t seem to be absorbing the nutrition necessary to survive from the rotifers or Artemia they were eating.

“Cannibalism is also high in this phase,” Perez said in an advance announcement of her presentation at the forum in October.

Pérez noted that to date she has been unable to keep the juveniles alive past about 349 days. (In the wild they will live for up to eight years.) It takes them about 50-60 days to turn from larvae into fish.