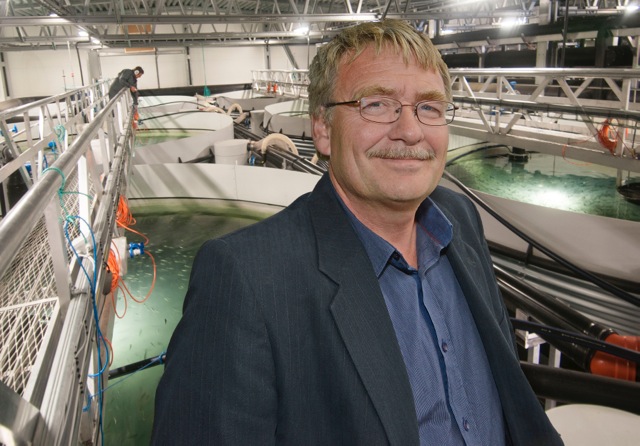 Since 1990, Maximus A/S in Bedsted, 40 kilometers from Hanstholm, Denmark has traditionally reared turbot and sole from eggs to fry and juveniles.

Dr. Bent Urup, CEO of Danish Salmon A/S and the mastermind behind several recirculation aquaculture system (RAS) businesses in Europe and Asia, was the initial developer of Maximus more than 20 years ago, and has recently purchased the company back from AkvaGroup, with a new plan for its future.

“Maximus was initially just a juvenile supplier, but the times were different then,” explained Urup in emails and Skype correspondence with Hatchery International. “Now, I consider it a ‘must’ that a juvenile supplier be vertically integrated with growout production.”

What makes Maximus work for the production of marine fry is the copepod rearing technology. The copepods are the natural prey for most marine fish larvae, including tuna, turbot and Kingfish, Urup explained.

Other RAS hatcheries in Europe, North and South America, the Middle East and Asia, based on Urup’s Maximus design are producing tuna, kingfish, barramundi, sea bass and tiger grouper among others. Among some of the companies using Maximus design concepts are Futuna Blue, in Spain, Aquino, in Chile, NPC, in Saudi Arabia, and Rompin Hatchery in Malaysia.

For Urup’s latest project, Maximus A/S will be the supplier of juvenile marine fish to nearby growout facilities which will be established in Hanstholm under the brand-name Sashimi Royal, with construction work planned to be initiated once the coming winter is over – in March 2015.

With a majority of supplies coming from Veolia Water Treatment’s aquaculture subsidiary Kruger Kaldnes A/S, and construction company Graakjaer A/S, Urup, and partners will develop the new Sashimi Royal project. The initial phase will be for 2400 tonne production of salmon with a second phase providing an additional 2400 tonnes of seriola (kingfish).

In parallel the Maximus facilities will be renovated to supply the juveniles for the new growout installations.

Once finished, salmon, seriola, turbot, and later tuna will be sold to market as sushi and sashimi grade product.

“During the renovation Maximus will be reconstructed to support growout production with fry for up to 5000 tonnes of salmon in parallel with 2500 tonnes of seriola (minimum 1,200,000 smolt and 600,000 kingfish juveniles),” said Urup.

Urup plans to hatch salmon eggs at the same time construction is underway at the growout facility so they’ll have smolt ready for transfer once construction has been completed.

Some of the existing installation previously used for nursing the turbot juveniles will be modified into a RAS-based five-step smolt production unit with continuous production of six batches of smolt per-year, with a total annual smolt production of minimum 1.2 million smolt, he said.

“The remaining buildings previously used for marine fry production, including the large copepod production system, will be renovated, to be continued with marine fish fry production,” explained Urup.

“Salmon will come first and be the ‘bread and butter’ business, with kingfish 4-5 years down the pipeline, as this is the time it realistically will take before we can generate a steady supply of juveniles from the facility,” he said.

Urup admits his plan is ambitious, but realistic, based on proven technologies and on Urup’s 20 years experience in the RAS field working with these species.

The setup at Maximus for marine fry production is much the same as at Futuna Blue, he said. This includes six large copepod tanks where all the feed required for the kingfish fry and later the yellow fin tuna will be produced, and a 12 tank first feeding setup, Urup explained.

“Further down the pipeline I would like to continue my work on tuna propagation at Maximus,” he said.

From a market point of view, he considers the yellowfin tuna as the more realistic species to culture in Denmark, where land-based closed facilities will be required for tuna production.

“There will obviously be challenges with this species. It is a warm water species, but in RAS systems we are always in excess of heating,” said Dr. Urup.

“The initial move would be a broodstock installation, if we can find the resources and if the other investors will back it,” he said. “I know it may sound a bit ambitious, but I’m familiar with the production and the challenges in both salmon, kingfish and tuna production.”

Renovation and modification for production of 1.2 million salmon smolt annually, plus 600,000 kingfish.

• Start-up with future broodstock of Kingfish

• Production of turbot fry /based on contract sale