Highly prized for sashimi, sushi, nigiri and Peruvian recipes, such as ceviche and tiraditos, the Yellowtail (Seriola lalandi) has found a great ally in recirculating aquaculture systems (RAS), which seems to be a perfect match for rearing this species on land. 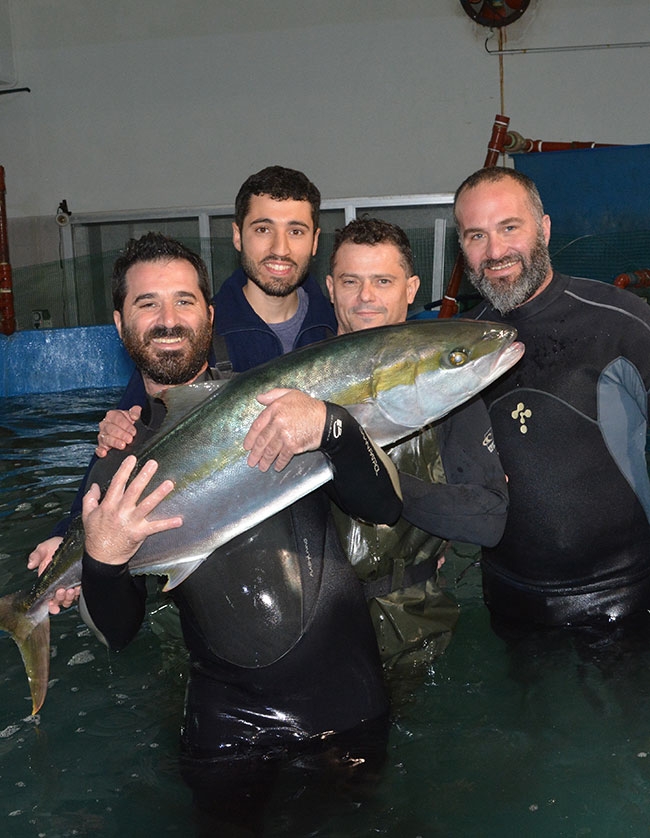 In addition, since these fish are farmed in closed-containment systems, their meat is free of parasites, making them an optimal choice for raw fish consumption.

Recognizing this potential viability, several companies producing Yellowtail are investing millions of dollars worldwide to scale up their operations and meet the requirements of a growing global demand.

As additional attribute, the production of S. lalandi in RAS systems is regarded as sustainable by international non-profit organizations such as the Monterey Bay Aquarium, which has included this farmed fish in its Seafood Watch Program as ‘Best Choice’ in its ‘Green List’, or the Good Fish Foundation, which has recommended it as a ‘Green Choice.’

Increasing capacities
The Argentinian Institute for Fisheries Research and Development – called, INIDEP, by its initials in Spanish – started farming S. lalandi in 2016, with a team of four skilled professionals (Facundo Bernatene, Pablo Javier Martínez, Pedro Camilo Menguez and Mariano Spinedi) working on its Yellowtail RAS project. In just two years, they have reared its own breeders from eggs hatched in Mar del Plata.

Facundo Bernatene, head of the breeding program of S. lalandi within the above-mentioned team, describes this initiative as the most innovative and ambitious aquaculture project that has taken place in the country.

“Currently, we have a new breeding stock of breeders obtained from captivity-born individuals, which are reproductively active and producing viable eggs,” Bernatene explains. “To validate the last and final stage of our proof of concept, we have scheduled an official tasting with an expert panel of recognized chefs that will evaluate the sensory qualities of the product.”

Right across the Andes, Acuinor began a similar project a few years earlier in Chile. In less than 10 years, the company has been able to create a genetic program with land-based reared breeders, weekly egg production and a 2018 harvest of 10 tons, which is expected to be doubled this year.

Some years before that, Kees Kloet (Silt BV) and Bent Urup (Aqua-Partners ApS) announced almost simultaneously the commercial scaling of S. lalandi in RAS with the construction of Kingfish Zeeland in the Netherlands and Sashimi Royal in Denmark, respectively.

Sashimi Royal’s production facility is located near the port of Hanstholm. Its annual production is around 1,200 tons and the company has been delivering to market since 2017. “We have been farming Yellowtail for the past two years and refined the production method to achieve good spawning and fish welfare,” the company says on its website. Sashimi Royal was unavailable for comments as of press time.

Meanwhile, with a current production capacity close to 520 tons per year, Kingfish Zeeland plans to grow that capacity to 1,000 tons this year, and to 4,000 ton by 2020, Kloet tells RAStech sister publication Hatchery International in an earlier interview. The company also plans to establish a production facility in the United States (see ‘Yellowtail borne from research to RAS’ in Hatchery International, Volume 20 Issue 2).

With close to 6,000 tons in capacity per year, the Australian company Clean Seas is the largest producer of this fish outside Japan, where three Seriola species (S. quinqueradiata, S. dumerili and S. lalandi) count for around 180,000 tons annually.

Technologies and workforce
While Kingfish Zeeland’s 5,000-square-meter RAS farm was born with technology from Billund Aquaculture, Sashimi Royal relies on its sister company Maximus, which has produced marine fingerlings for the past 25 years in its 3,000-square-meter indoor production facility (with more than 35,000 cubic meters in outdoor production tanks). High control and pure-quality water are a common theme in these environments.

On the other hand, the RAS systems used by the Argentine team  are of the team’s own design. “We have been following the evolution of RAS for more than 15 years, but the worldwide jump to the third generation was the key for us,” Bernatene says.

“The systems with Moving Bed Biofilm Reactor (MBBR) of fluid bed were a fundamental part of this evolution. The MBBR is a complete mix and continuous flow process that achieves greater process stability, greater efficiency per cubic meter, favors the elimination of solids without leaving dead zones, and does not have the need for periodic backwashing. In addition, it allows working with low pressure systems, reducing energy costs,” he explains.

The Argentine head of the Yellowtail breeding program points out that this species has a high growth rate, excellent feed conversion rate and are optimal for RAS technologies. “It has a great adaptability to be farmed in RAS systems at high densities,” Bernatene adds.

Similarly, Acuinor has designed its own RAS systems. “This technology has been developed given the knowledge we have acquired in the cultivation of this species, having determined its optimal conditions of photoperiod, temperature and nutrition, among others. This knowledge has allowed us to know precisely the requirements of this species, their demands and emissions, as well as their behavior,” says Muriel Teixido, development manager at Acuinor.

Difficult access to skilled personnel has also required additional efforts from these South American producers of RAS-grown Yellowtail. For example, in Argentina there is no aquaculture college degree in local universities. “We have had the good fortune to be trained in countries such as China, Japan, South Korea, Chile and Brazil, besides working for more than 15 years developing new technologies of sustainable culture of marine fish in RAS,” Bernatene says.

Although Chile has an extensive aquaculture industry – thanks to salmon farming – Acuinor’s Teixido says as far as production is concerned, rearing of marine fish is still in its early stages of development. It demands specific techniques and knowledge, “which has required us to train collaborators in this particular trade,” she explains.

The Argentine team has conducted a thorough analysis of experiences around the world with regard to fish feed performance in RAS with the Yellowtail species. These analyses were combined with their own practices.

“With the raw materials available, we formulated a specific diet for this species,” Bernatene says. This feed was manufactured in cooperation with one of the three largest freshwater fish feed companies in Argentina (Paku Téko, Chaco).

“So far, a specific feed supplier is not available and probably until an industry develops, nor will there be one. However, Argentina has raw materials of excellent quality, such as fishmeal and fish oil that are obtained from cuts derived from the processing of the local fishing industry. In other words, we use a by-product or waste, and we transform it into a premium fish,” he adds.

Even though the Chilean salmon industry is well supplied by large feed manufacturers present in the country, these suppliers are not covering the Yellowtail needs. “Since our farming volumes are still low, it is not of great interest to feed suppliers since they do not manufacture small batches of feed,” says Teixido.

Related
RAStech 2019 in Washington is less than a month away!
Swiss salmon farm uses sustainable farming techniques in the Alps
From hobby to hatchery
Dutch Yellowtail producer to set up RAS facility in US