It’s no secret that New Zealand’s primary sector is driven by exports, and the New Zealand Scampi (Metanephrops Challengeri) fishery is no exception. 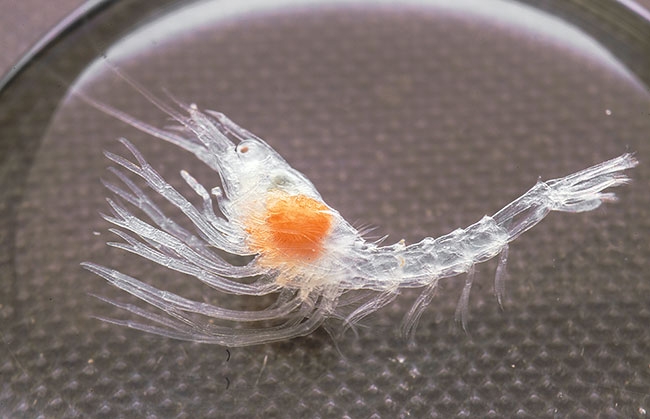 A New Zealand scampi larvae. Kevin Heasman and his team have hatched over 1500 this year so far It’s no secret that New Zealand’s primary sector is driven by exports

There are reliable reports of single scampi selling for $20/fish, or $300/kg, overseas. While the fishery is well managed and healthy now, any fisher can tell you that unstable international prices caused by the inherent unreliability of wild catch is bad for business in the long term. A sustainable, reliable source of scampi is thus desirable to those seafood companies that target New Zealand scampi.

One company pursuing this goal is Waikawa Fishery Company Limited. A self-described, “sustainable Maori seafood company,” it has been working with the Cawthron Institute in Nelson, New Zealand, to develop a proven, cost-effective and scalable way to rear New Zealand scampi on land.

Rearing progress
Readers may remember that we published a short article (Hatchery International, Nov/Dec 2016) covering the launch of the project. Author Quentin Dodd led with a description of one of the earliest big breakthroughs of the project: the first birthday of Camilla, the first New Zealand scampi larvae to be reared in a laboratory successfully. Prior to this discovery, the closest science had come was to hatch one larvae in 1976. The larvae died soon after initial description.

The progression from the 1976 discovery to Cawthron’s successful ‘Camilla’s first birthday’ event represents a huge leap in the development of successful production. This pace has continued since. Currently, Kevin Heasman, the Cawthron aquaculture scientist in charge of the development and operation of the scampi rearing facility, has approximately 50 brood females and has hatched approximately 1500 larvae since the beginning of 2018. Broods are wild-sourced and come to the facility from Waikawa Fishery Company regularly via a purpose-built tank – first on-board the vessel, then by truck. To say that the project has developed is an understatement. It has flourished.

This success has, however, come at the expense of a few serious issues. “At the moment, we’re dealing with the very basics,” Heasman says. Fortunately, he is part of a team of dedicated scientists who can make educated assumptions about the solutions required for a burgeoning new species sector, and back those assumptions with solid research.

A New Zealand scampi larvae. Kevin Heasman and his team have hatched over 1500 this year so far

Problem solving
The first great challenge is, of course, the rearing environment. New Zealand scampi are found all around New Zealand, typically at depths of 200 to 500m, but sometimes as deep as 800m. It’s quite a challenge to determine how to replicate the aquatic conditions of such a generally un-explored area of our planet to a sufficient degree that the specimens remain healthy and continue to grow. While Heasman and his team knew there would be roadblocks, sometimes they would “just hit a wall,” and then find out why afterwards.

A notable development was the use of red light in their hatchery, which sought to avoid over-stimulating the scampi’s sensitive eyes, while offering the staff enough light to work in. This has resulted in a productive working environment for both culturist and specimen.

Another significant challenge has been diet. “Feeding them is one thing, but their dietary requirements are another…we can keep them alive, but how do you keep them healthy?” says Heasman.

It isn’t quite as easy as feeding them shrimp feed and hoping for the best. This is, then, another area where an educated assumption based on the scampi’s natural environment is implemented and practices are altered based on research. For example, they know that calcium is more biologically available at depth. They do not, however, know the correct amount or vector for the New Zealand scampi, so they work from one assumption and move to the next as required.

Once this is sorted, they have a multitude of other possible vitamins, minerals, fat and protein requirements to determine. Heasman is confident, however, in their ability to discover the answers to these dietary questions over time.

There is also the problem of uncooperative specimens. Soon after her birthday, Camilla, the most famous larvae to date, was meant to be the star attraction for an important incoming tour. Heasman was proudly showing off the hatchery, when they suddenly noticed that Camilla appeared to have died, with her legs up and remaining perfectly still. Shortly before the onset of panic, however, he managed to rouse her from her rest and relay to the tour that she was simply behaving like an ordinary burrowing creature.

The end goal
According to Heasman, the ideal outcome of this project is to recreate the success of the research-to-industry transition that was executed in the case of the SpatNZ. The genesis of SpatNZ lies in research carried out by the Cawthron Institute, and it has manifested in a commercial Greenshell mussel hatchery that will soon supply around a third of New Zealand’s Greenshell mussel spat. This hatchery is run by a business-government partnership.

The SpatNZ model is unique in that it allows Cawthron and the hatchery to continue working together, each advancing their own, symbiotic objectives. Heasman believes that this would be an ideal arrangement for the future of the New Zealand scampi project, particularly because, just as rearing them is an unprecedented challenge, so too will be the scaling up of the technology. In the words of Heasman, “there will be unforeseen challenges.”

If current success is any indication, farming Scampi will soon not be a matter of if, but when….