Compared to on-shore grow-out farms, where water is pumped through tanks and raceways, fish hatcheries and nurseries use significantly less water. The reason is that the biomass produced in these facilities is normally 10 to 100 times smaller than in grow-out farms. So, why is there a need for RAS technologies in fish hatcheries? 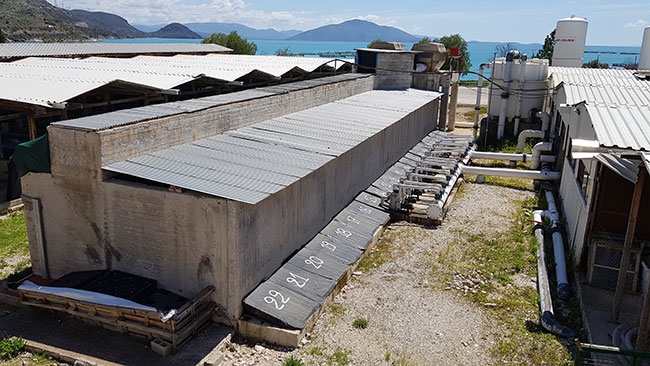 At the Sagiada Hatchery there are two nursery blocks. With an increase in fry production the supply of quality water became limiting and the company developed a large water treatment system that allows each litre of water to be used 10 times. Compared to on-shore grow-out farms

There has been a significant improvement in survival performance over the last 20 years in many Mediterranean hatcheries, resulting in the production of many more weaned fry than the nursery can pre-grow. Effectively, nurseries have become the bottleneck in production.  Often, this is not due to the lack of available tanks but to the limited access to good quality water to allow for healthy growth of fry in these nurseries.

One of the key reasons industrial hatcheries in the Mediterranean needed RAS technologies was to significantly increase the volume of water available in their nurseries.

Other factors, such as stable water quality, lower heating or cooling costs and better production planning, are also relevant in some cases – but water availability remains the key reason for using RAS.

Industrial-scale application
Based in Greece, Selonda Aquaculture is one of the largest marine fish farming companies in the world. After the merger with Dias Aquaculture, another large Greek aquaculture company, it increased its annual production capacity to 32,000 tons of portion-size fish.

Selonda is also one of the largest marine fish fry producers in Europe with an annual production of approximately 160 million marine juveniles per year. The majority is sea bass and sea bream.

The group operates six hatcheries, five of which include all departments from broodstock to nursery. The sixth one operates only as nursery and pre-growing, and also as a support facility for the breeding program of the group. All six hatcheries – although operating under common principles and methodologies as a very closely cooperating team – are different in terms of size, set-up, water sources, age of the facilities, and others.

Focus on technology
Historically, Selonda has focused on building its hatcheries’ technology and expertise. One area that has always attracted the group’s attention was RAS technologies. In 1992, Selonda bought a majority stake in a company specializing in RAS technology, and formed the International Aqua Tech (IAT). Following the acquisition, the company started introducing RAS technology in its hatcheries, starting with its first hatchery in Selonda Bay. Water in the two nursery blocks was treated and re-used using RAS.

In the following years, IAT was involved in several RAS projects around the word. The Selonda group of hatcheries, meanwhile, expanded its RAS utilization to new hatcheries that were being built or acquired by the group, based on the initial design of the first systems and the experience gained through the years. So, several new RAS systems were built to support increased production needs.

Highest returns
In installing RAS, the company prioritized those facilities where RAS will have the highest returns. The investment aimed to tackle specific bottlenecks at each farm that were preventing the production level from increasing. The company also wanted to keep the cost per fish at low levels mainly by minimizing losses from accidents and lower degree of control. Eventually, the additional investment and operational costs were well absorbed by the improvement in the KPIs.

All RAS are rather simple in design, with a high degree of new water entering the system per hour. Simplicity refers to a basic level of mechanical filtration, simple biofiltration, manual control and operation. The fraction of new water entering the RAS per hour is three to eight% of the total circulated water, and the water exchange rate in the fish tanks is between 60 and 100% per hour, depending on the system and size of the fish it is applied on. In the first feeding department, new water introduction rates varies according to the age of the fish and the degree of water circulation.

At the Sagiada Hatchery there are two nursery blocks. With an increase in fry production the supply of quality water became limiting and the company developed a large water treatment system that allows each litre of water to be used 10 times.

Flushing out some of the fish respiration and digestion by-products as well as biofilter products, together with a portion of the suspended solids, creates a favorable environment for the fish to grow. It requires relatively low RAS management skills and maintenance costs. Failure of these systems is unlikely to happen, and when it does, it is normally a result of a serious failure in equipment. However, this kind of scenario should be predictable well in advance if it is likely to occur.

Today’s RAS technologies are either designed for a group of tanks or for individual tanks. The selection relies on the existing set-up, the available space for the supporting equipment, the ideal strategy per nursery operation, and the balance of risk.

Plans for the future
The strategy of Selonda for the future is to significantly advance its existing RAS setup, and install new systems in the remaining nurseries that now operate flow-through systems. The target is to even double stocking carrying capacity of the existing systems and similarly on the flow-through systems that should be increased from 37% to about 65% within the next one-and-a-half years.

A large part of the development of the existing RAS will include improvements in automated control systems. Sensors and control boards will allow better operational control, even remotely. These technologies will be introduced gradually in the current systems, as personnel will be adapting to this new concept of RAS automation.

Introduction of additional mechanical filtration systems and expansion and/or modification of the biofilters will also be part of the improvements of all existing RAS. Although ozone technology has been introduced from the very first systems in the first hatchery in Selonda bay, its use remains limited in current systems and without automated control. Strategically, the intention is to introduce ozone technology in all current systems and in the new ones.

Finally, significant improvements in the hydraulics, aeration, oxygenation and degassing with some of the most advanced concepts will play a key role – not only in the RAS elements, but the fish tanks themselves, where the set-up will enable higher stocking densities under improved conditions. Closer monitoring of the different bacteria populations on a regular basis will also be a necessity as recirculation intensifies.

The accumulated experience of Selonda’s hatcheries division team on designing, setting-up and operating the RAS in the hatcheries is adequate to support the transition to the next level of higher efficiency systems. This experience, together with training on specific topics will secure the expected return on investment.

Diogo Thomaz, PhD, MBA, is a technical and business consultant for the aquaculture industry, based in Athens, Greece. After 15 years as R&D project manager and other industry positions he now leads Aquanetix (www.aquanetix.co.uk), a data management and reporting service for the global aquaculture industry.
Antonio Coli is the head of hatcheries at Selonda Aquaculture.