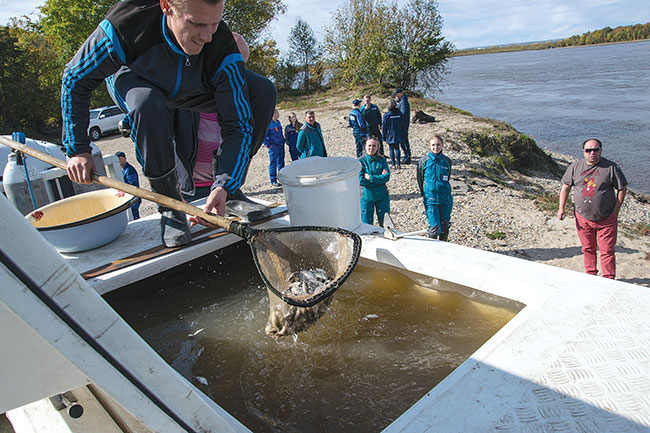 Government authorities in Sakhalin are offering incentives for companies to invest in building hatcheries for release to regional rivers to restore salmon population.

In 2020, hatcheries in the Sakhalin Island is targeting to release one billion fry to regional rivers which, if achieved would be an all-time record, the regional government said.

Sakhalin – a small island on the Russian Far East in the North Pacific region – is the country’s most important fishing center. Sakhalin accounts for 25 percent of the national fish catch. In 2018, local fisheries caught 720,000 tonnes of fish.

The hatcheries of the Sakhalin Island are growing primarily chum salmon (Oncorhynchus keta), because it is well known that this fish returns to the place where it was born – unlike the humpback salmon (Oncorhunchus gorbusha), which could go for spawning 900 kilometers away, commented Andrey Kovalenko, chairman of the fish industry department of the Sakhalin government.

Hatcheries in Sakhalin have set a record-breaking goal of releasing one billion chum salmon fry into the rivers this year.

The ultimate target of the ecological campaign is to fill the waters of the Sakhalin Island with salmon, which have been gradually declining over the past few years, Kovalenko said. In line with this, the regional government is offering the biggest state aid package among all Russian regions to investors willing to build a new hatchery, Kovalenko added.

In particular, Sakhalin authorities are reimbursing the investment cost of building the relevant infrastructure, including automotive roads, and connection to the common electricity grid to support this initiative. There are also direct subsidies to the hatcheries on equipment purchasing, Kovalenko said. Those efforts are already seeing some results, with broodstock from the regional hatcheries in certain areas already forming up to 90 percent of the salmon population, Kovalenko said.

There are no certain targets on how much salmon broodstock the regional hatcheries may produce, but based on already announced investment projects in this field, production could ramp up 20 to 30 percent from the current level, the regional authorities estimated.