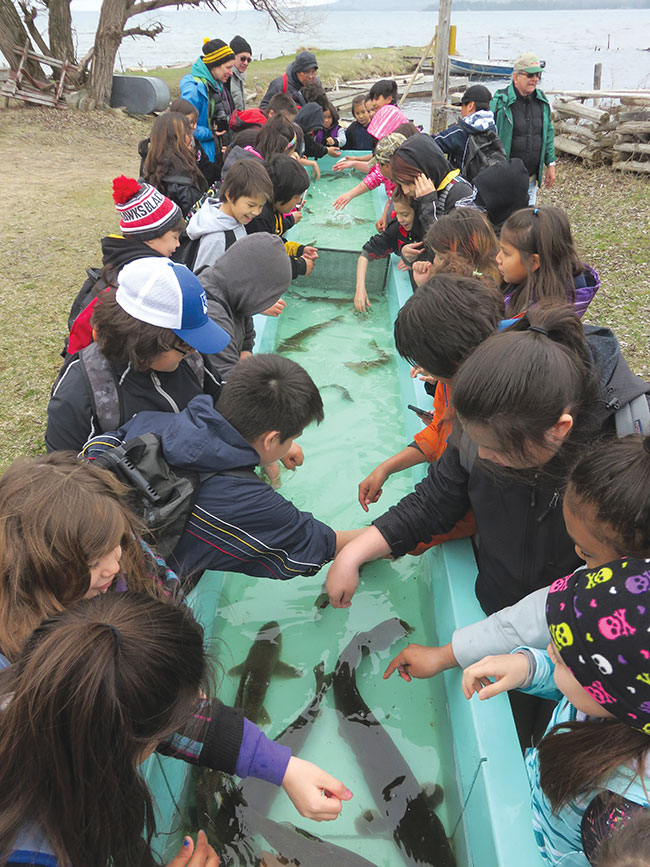 Visitors on an educational tour at the Bass Lake Creek Hatchery get an up-close and personal look at hatchery operations.

The idea of holding a promotional campaign or an event at your hatchery could sound like more trouble than it’s worth – putting a bunch of money and time into an effort that may not produce significant, tangible benefits. But, for many hatcheries, while the increased tourism dollars are a positive, the real benefits can be intangible, such as increased awareness and understanding of the importance of your operations by the public at large.

The hatchery at the Nechako White Sturgeon Conservation Center in Vanderhoof, British Columbia, Canada, was created in 2014 through a partnership with federal, provincial and municipal governments, and mining company Rio Tinto as a stop gap measure to address recruitment failure in Nechako White Sturgeon (Acipenser transmontanus) populations. Hatchery manager Mike Manky says further funding from Rio Tinto to hire summer students in 2017 allowed them to regularly hold tours at the hatchery, leading to a drastic increase in visitors.

“We noticed right from when we first opened that people wanted to come see these fish and we weren’t able to provide as many tours as we would like,” says Manky. “[Being able to hold regular tours] provides a framework for us to be able to showcase these fish and let people experience them and tell the fish’s story. Prior to 2017, we had less than 500 visitors a year, sometimes quite a bit less than that. Now we’re up to 3,000 per summer.”

In addition to holding guided tours, the hatchery features a variety of different features for visitors, including interpretive signs with historical and biological information, and other displays showing the massive size that the fish can grow to.

“A lot of people say, ‘I can’t believe these fish are in the river here, I had no idea and I don’t think I’m going swimming in the river again,’” says Manky with a laugh.

The effort in preparing all these informational displays and forming the partnership to fund the tours is well worth it, says Manky. The intangible benefits can be invaluable.

“The idea of having a lot of tourists come to your facility can be a little bit scary to hatchery staff or managers, but the payoff and having that support from visitors that buy into what you’re doing is priceless and very rewarding,” says Manky. “Especially young people, that’s something that brings me a lot of joy, seeing the excitement. I’ve actually seen young people in our community that were exposed to fish culture at this facility and have gone on to start careers in marine biology or fish culture. That’s pretty exciting to see and rewarding.”

Public education
On the topic of sturgeon, in 2018, Hatchery International spoke with representatives from Wisconsin’s Wild Rose Fish Hatchery about their efforts to promote their work with ancient lake sturgeon (Acipenser fulvescens) with a detailed display and a lecture series. Supervisor Jesse Landwehr says that while the ‘year of sturgeon’ was a one-time effort to promote the new displays, the hatchery has continued its efforts to promote the work.

“We’ve always found a lot of success showcasing the natural cycles of rearing fish and the natural spawning runs and the big splashy things the public likes to see,” says Landwehr. “We’re on Lake Michigan and every year we do an annual open house to kick off the trout and salmon run. Those, over time, have become events that the public have become accustomed to and want to see. On the first Saturday in October at our Kewaunee facility on Lake Michigan, we’ll get over a thousand people that’ll come through for an open house. It gives us an inroad to educate the public as to what we do and why we do it.”

Staff at the Nechako White Sturgeon Conservation center show samples of tags, preserved eggs, and show visitors how a sturgeon would be spawned at the facility.

One of the events hosted by the Manitoulin Streams Improvement Association is a brook trout eyed egg event, where volunteers and school groups put brook trout eggs into Norton’s Creek.

Not your ordinary hatchery staff
Back in British Columbia, the Allco Fish Hatchery in Maple Ridge has a unique feature – the Department of Fisheries and Oceans’ salmon enhancement facility has a work crew comprised of inmates from the nearby Fraser Regional Correctional Centre. While the inmates working at the hatchery are all pre-screened, low-security, non-violent offenders, this does require some logistic consideration for public events.

“We have events that we do throughout the year which are not necessarily open to the public,” says Sophie Sparrow, environmental projects and communications for the Alouette River Management Society (ARMS), a non-profit environmental organization that act as the public face of the hatchery. “More of an RSVP, we need to know who’s coming and how many people.”

The one day a year that they will allow the general public to freely enter the hatchery is their annual Rivers Day celebrations, which last year incorporated a celebration of the 40th anniversary of the hatchery. On Rivers Day, the hatchery will see upwards of 750 visitors who can enjoy a multitude of environmental and educational exhibitions, live music, food trucks, and a variety of children’s activities. During Rivers Day and other visits to the hatchery, the inmates will move to an indoor workhouse to not interact with the public.

“I would say that’s more so for the inmate’s safety than the other way around,” says Sparrow. “These inmates are here on very minor charges.”

Sparrow says these community events, along with ARMS’ promotional efforts in the community itself are essential. The hatchery is away from the downtown area and not on a public transit road. Rivers Day, and ARMS’ community engagement efforts, bolster ARMS’ volunteer numbers, who perform valuable duties such as counting fish in the rivers and monitoring egg laying.

“That one day a year can transform into people getting involved through volunteering or becoming a member or donating or spreading our message onto other people who maybe didn’t even know that ARMS exists in the community,” says Sparrow.

School trips
On Manitoulin Island, in Ontario, Canada, the Bass Lake Creek Walleye Hatchery is the site of an annual educational event hosted by the Little Current Fish and Game Club in partnership with the Manitoulin Streams Improvement Association (MSIA). The event sees almost 100 students from area schools learn first-hand about stocking efforts at the jar-hatchery.

“It started with a couple of schools, but now I think we’re up to about six schools that have been attending,” says Manitoulin Streams project coordinator Seija Deschenes. “We’re increasing their knowledge base of what is happening in the community to improve the fisheries and creating the next generation of stewards of the land. Getting the kids potentially involved and interested in this field of work. We’re hoping to create the next generation of volunteers that may come out and help give back to the land and the community.”

Tourism is a key economic driver for the island in every season but Winter, says Deschenes. As such, there are a variety of water-based attractions, from fishing derbies to tourist activities at the government-run Blue Jay Creek Hatchery.

“We have lots of resorts and cottages that are rented here, a lot of people from Southern Ontario will come up to the island,” says Deschenes. “That’s part of their relaxation, they come to get away from the big city and be surrounded by water and a lot of activities revolve around being out and being able to enjoy it.”