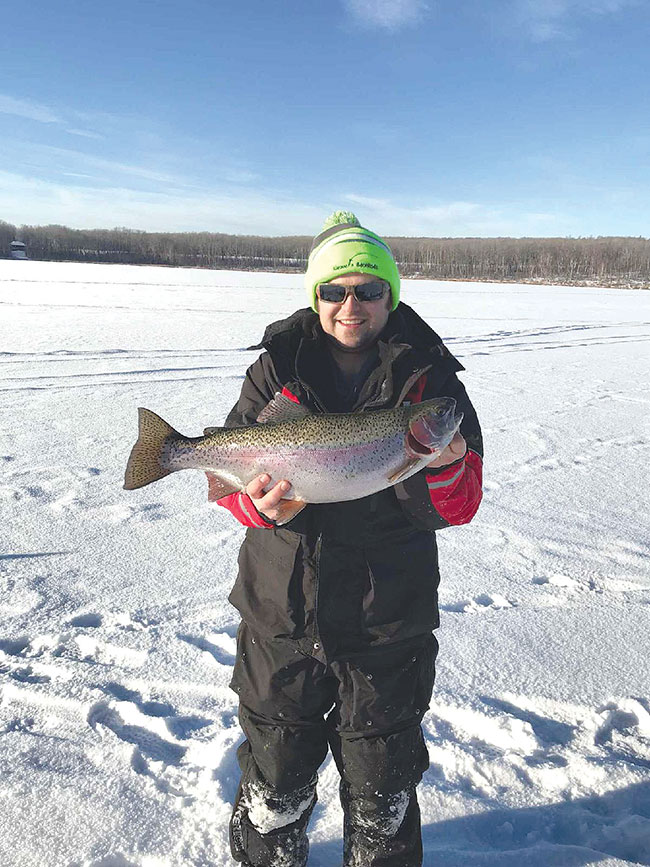 There has been a 30 percent increase in fishing activities in Alberta since COVID-19 hit, according to Copeland.

For government-funded fish hatcheries in Canada and the United States, COVID-19 has affected operations on various levels; in some cases, changing processes to enable social distancing, and causing the cancellation of some programs. But the fallout may not yet be fully realized.

One thing became clear this past summer though – as anglers headed out to enjoy more time on the water, the importance of the work hatcheries do in stocking lakes became even more evident during the pandemic as people went in search of outdoor activities.

Provincially-funded hatcheries in Canada and federally-funded ones in the U.S. appear to be staying the course. Those in Alberta have benefited from refurbishment funding announcements made earlier this year. However, state-run hatcheries such as those in Washington State could be headed for steep budget cuts over the next few years.

Shifting stocking operations
“In some areas, we have reduced production, but in other areas, we are able to continue the program as normal,” says Kurt Schilling, hatchery program supervisor for the U.S. Fish and Wildlife Service, Great Lakes Region based in Minneapolis-Saint Paul. This region oversees hatcheries and fish health centers.

“We have five facilities that support work in the Great Lakes and one of the five overlaps river operations. Another facility is located in southern Missouri that does mitigation for rainbow trout,” Schilling explains.

The Great Lakes region has not been notified of any budget cuts so far.

“I don’t anticipate any issues. We will probably be functioning on a continuing resolution, which will mean funding for the next fiscal year at current year levels, so we’re looking at a flat budget,” he says.

Schilling says health and safety restrictions have meant functioning differently and defaulting to other means of stocking fish.

“We have our own broodstock for lake trout for the Great Lakes and Coaster brook trout stocked for Lake Superior, and a lake herring program for Lake Huron – those are functioning as normal. We did have to shift our stocking operations for lake trout this past spring. Normally, 95 percent of our fish are stocked offshore, but due to safety restrictions, we ended up shore stocking our lake trout this year, which hasn’t been done for a number of years,” says Schilling.

While outdoor spaces at hatchery facilities have remained open throughout the pandemic, interpretive centers have largely been closed to the public.

“They have remained that way depending on local conditions at county, city and state levels and the national level, according to COVID-19 caseloads and infection rates,” he says.

Schilling says that at some facilities where in-house brood programs don’t exist or don’t have carryover fish from prior years, such as walleye and lake sturgeon, they weren’t able to have production cycles this year. That’s because they couldn’t maintain social distancing in the field for spawning.

For rainbow trout, the eggs are sourced from facilities throughout the United States.

“They can ship the live eggs to us so we can maintain that program from a production standpoint,” says Schilling.

The Great Lakes service, through the Department of Interior, has initiated an adaptive operations plan that includes job hazard analysis, risk assessments and analysis of COVID-19 cases in the local area.

“We are in different phases of implementation depending on local conditions, and we put the decision with project leaders because they are close to the decision for their area and can consult with us,” he says.

Right now, some travel is restricted for the staff, with only overnight trips approved.

“We will be able to function where we have our own broodstock and have our own eggs, but where we have to get into the field to spawn and depending on how caseloads go and whether a vaccine is developed or not, we will have to adapt accordingly. We may have a few species we have to delay, but hopefully, by spawning time for walleye next spring and lake sturgeon, we can have a path forward,” he says.

Unlike some state-run hatcheries that have experienced some personnel layoffs, staff have been retained at hatcheries at the federally-funded hatcheries, says Schilling.

“We’ve been fortunate on the federal side – we haven’t had to lay anyone off. We have created a split crew where different pods of people work together, and we have maximum telework happening, but for those people who we need to maintain production, we are maintaining distance and using masks and disease control guidelines,” he says. “It’s been a similar function nationally – every region handles it a bit differently.”

In late June, the Washington State Department of Fish & Wildlife issued projections for budget reductions of up to 15 percent and outlined areas it may cut over the next few years up to 2023, including the proposed closure of salmon and stealhead hatcheries and reductions in salmon and trout hatchery production.

“The closures are just proposed at this point, nothing is certain yet. If they occur, they would take place beginning next summer,” says Washington Department of Fish & Wildlife pubic affairs director Carrie McCausland in an email.

If approved, hatchery repairs would also be cut by 32 percent. About 25 percent of the departmental budget is used to operate its 80 hatchery facilities. 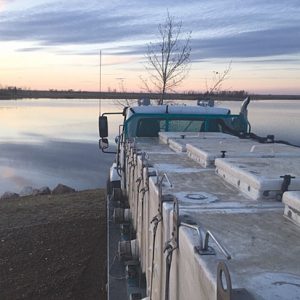 One of the stocking trucks at Cold Lake Fish Hatchery 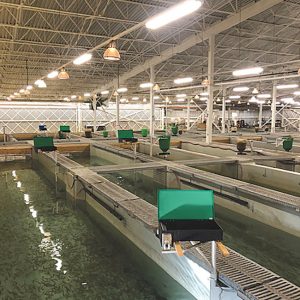 The Alberta government has allocated $10 million for the upgrade of the Cold Lake Fish Hatchery, which produces about 65,000 kilos of trout per year for stocking.

Up in Canada
In the Canadian province of Alberta, an injection of funding first announced earlier in the year provided some welcome good news for upgrading facilities.

“We were stocking fish when COVID-19 hit, and we put out about 1.3 million trout throughout Alberta. We stock about 170 lakes in total,” says Craig Copeland, manager of the fish hatchery in Cold Lake, Alberta, and who oversees three others in the province. “We have operated the business as usual as much as we could.”

“We’re an essential service – the fish need to be taken care of every day and so what we did right away at the hatchery was develop small work teams, practiced social distancing and controlling movement in the facility. We closed down any facilities to the public. Anyone with symptoms stays home and gets tested,” says Copeland.

The Cold Lake Fish Hatchery is closed to the public for the time being, including educational programs for about 2,000 kindergarten children who visit the hatcheries.

The timing was certainly on the side of provincial hatcheries in Alberta, where funding previously asked for was announced in January and in August. Copeland, who is also the mayor of Cold Lake, manages the hatcheries in the province, including Cold Lake, Raven Creek Brood, Allison Creek Trout Station and Sam Livingston Fish Hatchery.

In August, Alberta Premier Jason Kenney announced $10 million in funding for the Cold Lake Fish Hatchery for the construction of new infrastructure that will allow for reuse of water during operations and to help reduce utility costs. About $3 million will be earmarked for a new oxygen generator and replace the hatchery’s water head box, metal roof and motor control systems.

Copeland says the funding request was submitted a year ago to lower operating costs over time.

“Our cost per fish that we stock will be much cheaper. We won’t stock more – we produce 65,000 kilos of trout per year already at Cold Lake, but it will lower operating costs by introducing recirculation into the system,” he says.

Funding of $26 million was also announced in January for a new hatchery to replace the Raven Creek Brood Trout Station near Caroline, Alta.

Copeland says there has been a 30 percent increase in fishing activity in Alberta during COVID-19 as seasoned anglers and those looking to enjoy an activity outdoors head to the province’s lakes for recreation.

“We’re getting reports of ponds we stock getting fished out,” he says.

Spawn camp cancellation
The Saskatchewan Fish Hatchery in Fort Qu’Appelle in Saskatchewan, Canada, is managed by Nelson Bergh, who says he is not expecting funding cuts, but due to physical distancing regulations, an annual project did not go ahead as planned.

“One of the biggest implications we had this year was that our walleye spawn camp was cancelled just due to the logistics of people being in close proximity during the camp. The government cancelled their request for walleye fry this year,” says Bergh.

Funding for Saskatchewan’s hatcheries is provided by a fish and wildlife development fund – 30 percent of hunting and fishing licence sales goes into the fund.

“As of right now, we don’t see any financial implications from all of this right now,” says Bergh.

On average, about 500,000 trout fingerlings are produced each year at the hatchery. A visitor centre that would typically be open remains closed – about 4,000 people who visit the centre each year.

“The facilities are staying closed, and we are doing more sanitization, especially when in the stocking phase of the season with trucks going out all the time and coming back. We have been doing sanitization between trips, especially when switching drivers,” says Bergh. “We are definitely doing more maintenance and painting some buildings that we typically wouldn’t get to in a given year.”

The hatchery’s summer students program still took place, and the only change was that in an average year, the students would be taking part in stocking trips, but with COVID-19 restrictions, travel was limited to one person per vehicle.

On Canada’s east coast in Nova Scotia, it has mostly been business as usual for provincially funded hatcheries, says the Minister of Fishers and Aquaculture, Keith Colwell.

“Heading into COVID-19, the Province of Nova Scotia was in good financial shape, and we’re not headed for any cuts to our in-land fisheries operations, at this point anyway,” says Colwell. “We’re suffering like any other province, but we have put solid programs in place to deal with the financial issues and COVID-19 issues that go hand-in-hand.”

The province operates three sportfishing hatcheries in the province – Fraser’s Mills Hatchery, McGown Lake Hatchery and Margaree Fish Hatchery. About 200 lakes are stocked each spring as part of the urban stocking program. Hatchery interpretive centres in the province are not open to the public, but people can still visit facility grounds as long as they abide by public health orders.