The strains that the researchers have produced include Tetraselmis sp., Chaetoceros calcitrans, Nannochloropsis sp. and Chlorella vulgaris, all in paste form, according to Soledad Garibay, project head for UPV-CFOS Improvement of Microalgae Paste Production for Aquaculture. 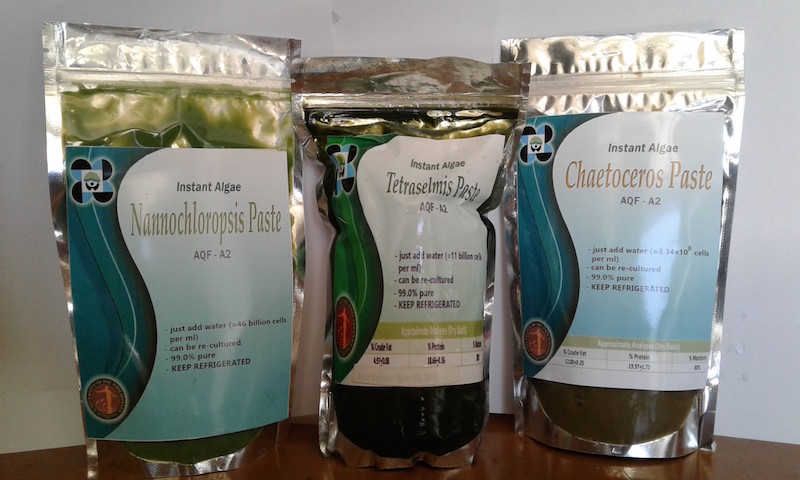 Affordable larvae feed for local hatcheries has been developed in the Philippines through the collaboration of a state university and government agencies.

The algal paste is available at about P1,500 ($30) a kilo (see sidebar) and it is now being tested in private milkfish and shrimp hatcheries in the Philippines. At the present time UPV can produce 60 liters of paste per production period of 10 days.

The commercially available brands are all imported. The cost, between $100 to 150 a kilo, is more expensive owing to logistics charges such as shipment and customs processing fees. These processes also cause extended time for delivery.

“Its cultivation is usually dependent on natural illumination and ambient temperature,” she said “However, these days, light and temperature parameters have become unpredictable because of climate change. Hence, dry and rainy months are no longer distinct. Such a scenario for [outdoor] microalgae production is not sustainable.” The Philippines has two marked seasons: dry and wet. Wet season usually extends from June to November.

While microalgae paste is not new, it seems that Philippine hatcheries are still in a wait-and-see stance with regard to this locally produced paste.

“Industries are open to the possibilities of using paste in hatcheries but they want first to see if the technology will really work.  So the pilot-testing activities of UPV will validate our claims for the product,” she said.

Improvement/enhancement of product shelf-life and nutritional quality are on-going.

“With the algal paste, our local industry can be provided with an efficient and readily available larval food. However, further refinements are necessary for the algal paste to be fully utilized by the industry in providing cost-efficiencies in aquaculture,” Garibay said.

The collaborative effort to produce the microalgae included researchers from the University of the Philippines Visayas, College of Fisheries and Ocean Sciences and the Department of Science and Technology and the Philippine Council for Agriculture, Aquatic and Natural Resources Research and Development (DOST-PCAARRD).

• Chlorella vulgaris is a eukaryotic, unicellular green algae that thrives in freshwater; it’s spherical in shape.