The Beluga sturgeon (Huso huso Linnaeus, 1758) has a decreasing population trend and is classified as critically endangered in the Black- and Azov seas, and regionally extinct in the Adriatic Sea. It is extirpated from the upper parts of almost all the European spawning rivers (e.g. Danube, Dniester, Dnieper, Don, Kuban, Terek and Volga) mainly because of overfishing and dams that block migration routes. 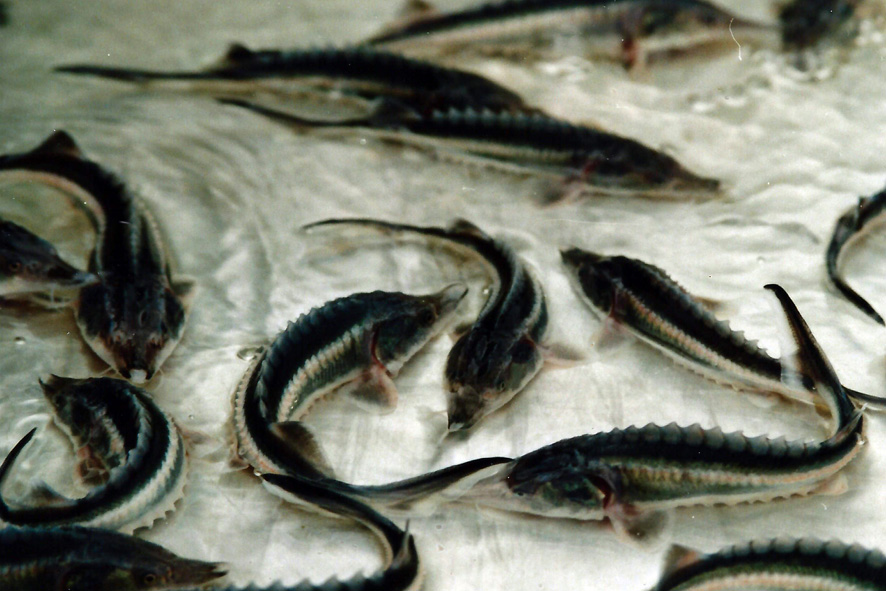 Official commercial landings (mainly Russian) have decreased dramatically during recent decades, from >520t/a in the early 1990’s to <3 t/a at the beginning of the 2010’s. Huso huso is the largest freshwater fish in the world, and is a valuable candidate for aquaculture as it has the fastest growth within the family, and its caviar commands the highest price.

Martin Hochleithner (owner of AquaTech, in Kitzbuehel, Austria) started farming sturgeon in the

In the early 1990s a large number of fertilized H. huso eggs from the Pontic Danube stock was hatched and cultured in Austria. These F1 larvae were fed with live zooplankton (Daphnia) and choppped live oligochaetes (Tubifex) for the first weeks. After a month, the fry were weaned onto crumbled dry-food, mixed with moist feed for a few weeks, then stocked into 5m Ø circular tanks for five years, until a heavy bacterial infection occurred. Thereafter the fish were stocked into small earthen ponds (100-2000 m2), for an additional five years.

Under a cooperation contract with Stefano Marturano (manager of Azienda Agricola Pisani Dossi in Cisliano, Italy) part of the 10-year-old sub-adult stock was transferred to Italy (the rest remained in Austria), in order to divide the risk for these highly valuable broodstock specimens. There the fish are kept in circular tanks (6m Ø) supplied with ground-water (at about 12-18 °C), and are fed ad libitum with pelleted dry-food.

Under these culture conditions, the first males matured at nine years of age, but females did not mature before the age of 18. The first maturing females were found in the over-ripe stage VI in spring. Later it was discovered that beluga broodfish in culture conditions get ready for reproduction (stage V) in northern Italy in autumn (October-December), rather than in spring (March-May) like wild stocks under natural conditions. Out-of-season reproduction is reported here for the first time.

Full circle cultivation of beluga was reached at the end of last year, where a new generation (F2) of H. huso was successfully produced in captivity. The hatched larvae have been split (50:50) and sent to two different farms (in Italy and Austria), where they are stocked in different tanks (large rectangular and small square), and supplied with water at different temperatures (13-14 and 17-18 °C), and fed with different diets (frozen chironomids and live zooplankton), and finally weaned onto crumbled dry-food.

The survival rates after two months were almost identical, but growth was significantly faster in the warmer water. A small number of these out-of-season offspring were supplied for a restocking project in the Italian Po River and another larger number for farming activities in the European Union.

Breeding beluga sturgeon in captivity is still far from being routine, but the outlook is promising. The main problems have been solved, and the minor troubles identified, so regular reproduction can be expected henceforward. However, cannibalistic behaviour by the larvae remains an important issue to solve.

For more information contact Martin Hochleithner by email at: aquatech@a1.net; or Dr. Stefano Marturano at: smarturano@yahoo.com.