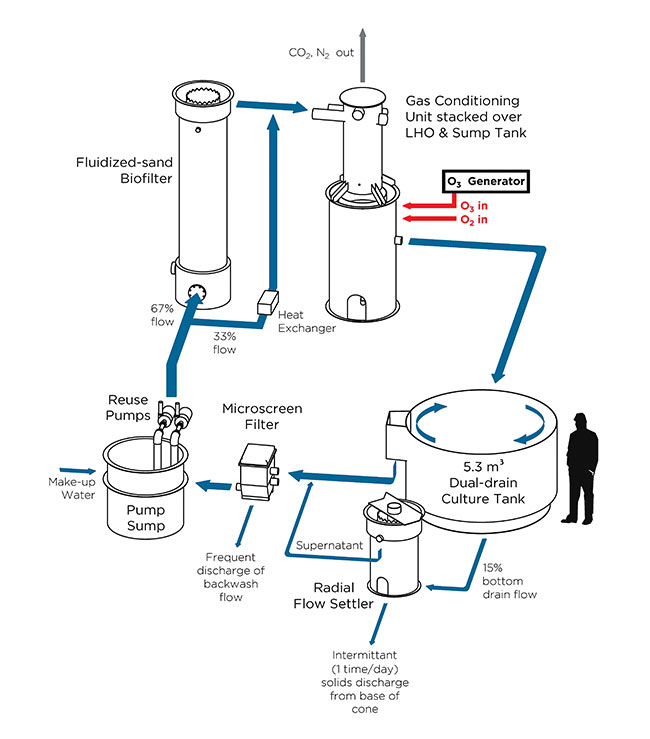 The use of recirculating aquaculture systems (RAS) for Atlantic salmon production has increased tremendously over the last decade. The Freshwater Institute (FI) has, in part, pioneered a path forward for this growing aquaculture sector by demonstrating that it’s biologically and technologically feasible to grow Atlantic salmon to >4 kg in freshwater RAS (Davidson et al., 2016). Nevertheless, this ambitious endeavor has not been without challenges. It is well-documented that a critical drawback is the increased tendency for precocious salmon maturation. Early reproductive development has been particularly prevalent at FI in mixed-sex, diploid populations where the vast majority of maturing fish are 1 to 2-kg males. In the worst cases, approximately 80 per cent of males matured before harvest, representing nearly 40 per cent of the total population (Crouse et al., 2021). Precocious salmon typically demonstrate reduced fillet yield, pale flesh colouration, and lower fillet lipid levels, which ultimately equate to a non-premium product and diminished revenue for commercial producers.

Considering these consequences, it’s not surprising that solutions for early maturation are near the top of the wish list for stakeholders in the burgeoning salmon RAS industry. However, reproductive development in Atlantic salmon is a highly complex and flexible process where many factors, including photoperiod, water temperature, fish nutrition, body condition, and genetics, dictate maturation (Good and Davidson, 2016). Therefore, finite solutions have not been fully identified. The RAS environment also creates a plethora of additional variables that could also be involved. For example, RAS operated with reduced dilution rates induce concentrated surroundings where a range of known and unknown compounds could affect the fish endocrine system. In fact, several studies have shown that hormones including estradiol, testosterone (T), and 11-ketotestosterone (11-KT), which play an endogenous role in maturation, can accumulate in RAS (Mota et al., 2014; Good et al., 2014; 2017). However, research evaluating the effect of waterborne sex steroids on Atlantic salmon maturation was formerly lacking.

To address this gap, FI researchers recently carried out an eight-month study evaluating the effects of ozone on Atlantic salmon maturation. Previous onsite research showed that ozone can significantly reduce waterborne estradiol and yield minor reductions of T and 11-KT levels; however, this study was carried out with post-smolt Atlantic salmon (~1250 g initial weight) that had already proceeded with reproductive development. Alternatively, the present study utilized smaller, immature post-smolts that were approximately 300 grams to begin. Six replicated 9.5 m3 RAS (Fig. 1) were used for the trial, three receiving low-dose ozone to achieve 310-320 mV ORP and three without ozone. Each RAS was operated with similar water exchange resulting in feed loading rates of 3.6 kg feed/m3 makeup water/day and a 15-day hydraulic retention time. A 12:12-h LD (light/dark) photoperiod was employed, but approximately 5 lux was maintained during the “dark” period to facilitate 24-hour feeding and semi-constant water quality. 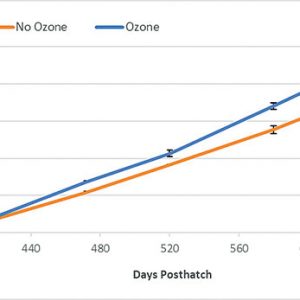 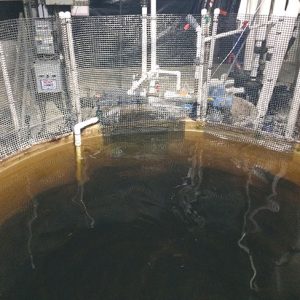 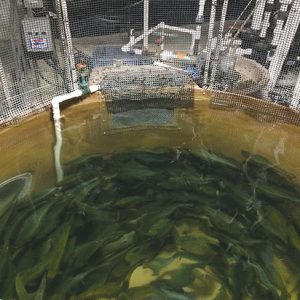 Appearance of culture tank water in RAS operated with ozone (left) and without ozone (right) ALL PhotoS AND GRAPHS: The Conservation Fund Freshwater Institute

As expected, ozone improved RAS water quality through significant reductions in true color (a measure of dissolved organics), heterotrophic bacteria count, and metals concentrations including copper, iron and zinc. Ozone also reduced estradiol levels and imparted generally lower concentrations of T and 11-KT. Nevertheless, reduction of these important sex hormones did not inhibit early maturation. In fact, maturation onset was observed sooner in ozonated RAS, and associated salmon populations exhibited a higher degree of maturation throughout the study. However, early maturation was also highly prevalent in non-ozonated RAS, and the slightly lower maturation rates observed for this treatment simply correlated with slower growth. By the end of the trial, maturing Atlantic salmon represented at least 50 per cent of the population in most RAS regardless of treatment. Maturing fish primarily consisted of males with bronze skin colouration and kype jaws, but low-level female maturation was also observed. When considering these findings, it is important to note that a few salmon exhibited morphology consistent with early maturation onset (namely bronze skin colour) to begin the trial. Therefore, it’s possible that fish had already received cues that triggered commencement of the maturation process. A review of literature, as well as anecdotal in-house evidence indicate that relatively warm onsite temperatures may be partly to blame. Salmon used in the trial were exposed to temperatures between 12 C to 14.5 C throughout the early rearing phase, and mean and maximum temperatures of 14.7 C and 16.2 C during the study.

Although precocious maturation was not inhibited, Atlantic salmon growth was faster in ozonated RAS (Fig. 2). Salmon from RAS with and without ozone weighed 2,156 plus/minus 101 grams and 1,810 plus/minus 15 grams respectively, by the end of the study. The exact cause of improved salmon growth in ozonated RAS is unknown, however, FI researchers hypothesize that cumulative improvements to water quality instigated by ozone may have been related. The most distinctive improvement to the culture environment was related to colour and clarity which may have affected the ability of the fish to see and capture feed. For instance, the highest true colour values recorded in non-ozonated RAS overlapped with observations of significant amounts of uneaten feed. Conversely, RAS receiving low-dose ozone had crystal clear water, which coincided with greater feed consumption rates during the same period. A comprehensive assessment of fish health and welfare metrics indicated that ozone generally did not cause negative consequences, with the exception of very minor damage to fin margins early in the study. Interestingly, similar growth, health and water quality responses were observed during a separate study that evaluated the use of low-dose ozone while culturing rainbow trout (Davidson et al., 2011).

Although ozone does not appear to be the solution for early Atlantic salmon maturation in RAS, its use could still be advantageous if maturation can be solved by other means such as use of all-female diploid or triploid stocks (Crouse et al., 2021). For example, if the growth advantage imparted by ozone extends to all-female salmon in larger, commercial size tanks then salmon could reach market-size faster. This could result in reduced production costs. Additional research is needed to assess these possible advantages.