Features Recirc
Peracetic acid use in RAS: Findings from research at The Conservation Fund’s Freshwater Institute

Peracetic acid (PAA) has recently been documented as an effective water disinfectant for aquaculture that also appears to be compatible with biofiltration when applied at low doses. As such, the outlook for PAA use in recirculating aquaculture systems (RAS) is positive, particularly when considering the environmentally friendly attributes of this compound. 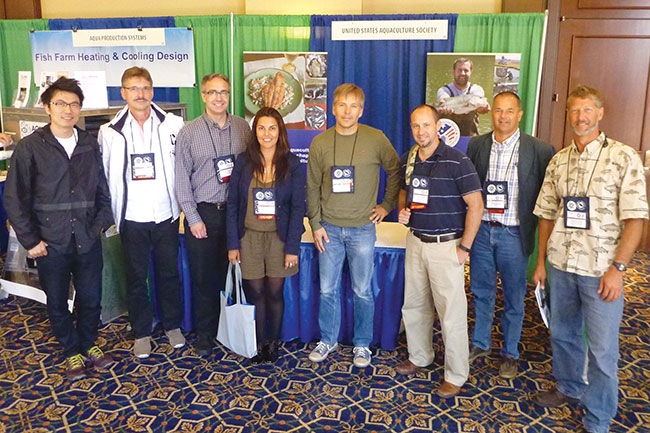 PAA is a powerful oxidant that is primarily composed of acetic acid and hydrogen peroxide. It reacts rapidly with organics and degrades to oxygen and water, and therefore does not result in harmful byproducts or pollutants. Due to its effectiveness as a water sanitizer, PAA could also be an alternate water treatment option to formalin, which is being phased out in several countries due to human health concerns.

Europe has accepted the use of PAA in aquaculture systems with fish present. In the U.S. however, it was only recently approved as a surface disinfectant for aquaculture equipment and production systems without fish by the US Environmental Protection Agency. It is possible that the use of PAA will become more commonplace for water treatment in the U.S. aquaculture industry pending further regulatory approval.

To facilitate the acceptance of PAA use in aquaculture systems, continued research is needed to develop and refine application methods and to demonstrate water quality and fish health benefits at optimized concentrations, particularly in RAS. In this article, we overview two PAA studies recently conducted at The Conservation Fund’s Freshwater Institute (TCF/FI) in Shepherdstown, West Virginia, USA.

To investigate PAA’s usefulness for reducing post-vaccination saprolegniasis, twelve replicated experimental-scale RAS were constructed, each with a 0.5 m3 circular tank and a miniature fluidized sand biofilter. Each RAS was stocked with juvenile Atlantic salmon at typical production densities and fish were given a short acclimation period. Thereafter, all salmon were vaccinated via intracoelomic injection with a standard, commercially available vaccine. Four treatments were established, with various PAA treatments administered over a six-week period including pulse doses to achieve 0.2, 0.5, and 1.0 mg/L PAA, plus an untreated control group (n=3).

Fish were monitored daily for mortalities and observations of external Saprolegnia spp. infections, and nitrification efficiency was assessed through measurement of total ammonia nitrogen (TAN) in water samples collected from biofilter inlets and outlets.

During the six-week period following vaccination, fish survival was significantly greater in all RAS treated with PAA compared to the untreated controls; although, no major fungal or pathogenic outbreaks were observed in the control systems. Biofilter function was unaffected by PAA administration, with no significant differences in TAN removal efficiency noted across PAA doses compared to the control RAS.

Visible saprolegniasis was significantly lower with increasing PAA dose, although growth performance diminished by a small, yet significant extent for PAA-treated fish.

Overall, this study provided evidence that PAA doses (0.2-1.0 mg/L) have the potential to prophylactically reduce post-vaccination saprolegniasis in Atlantic salmon without impacting RAS biofilter function. Mildly reduced growth performance, however, may be a temporary consequence of daily PAA treatments at the examined dosages.

A study was carried out in six replicate RAS (9.5 m3), three operated with semi-continuous PAA addition and three without PAA while culturing rainbow trout. Target PAA doses of 0.05, 0.10, and 0.30 mg/L were evaluated at approximately monthly intervals. A safe and effective PAA dosing strategy was developed that included an air-monitoring system for PAA vapor, drum spill containment, and a contained peristaltic pumping station designed to capture unexpected leaks. VigorOx -SP15 from PeroxyChem (Philadelphia, PA, USA) was used as the PAA source, and PAA was pumped directly from a 55-gallon drum to the headspace of low head oxygenators (LHOs) of RAS designated for treatment.

Rainbow trout growth and survival were not affected by PAA addition at the tested doses. Similar to the previous study, PAA rapidly dissipated, e.g., it was generally undetectable at the tank side drain. Therefore, PAA did not negatively impact nitrification, providing further evidence of its harmless nature when applied at low levels in RAS.

While PAA addition was compatible with rainbow trout production and RAS operation, it did not create dramatic water quality improvements like we’ve documented with ozone. Significant, but low-level oxidation of true color of the culture water was measured at 0.10 and 0.30 mg/L PAA, but total suspended solids and dissolved metals concentrations were not reduced.

Surprisingly, no clear antimicrobial effects were measured when analyzing bacteria counts in the RAS water. Oxidative reduction potential (ORP) increased with increasing PAA dose, like the response expected with ozone, indicating that PAA residual concentrations could potentially be monitored and controlled using an ORP feedback loop. Ultimately, PAA did not provide the same advantages of ozone at the tested concentrations.

Literature review indicated that the semi-continuous application approach used during this trial may have been at odds with creating water quality improvements, particularly antimicrobial effects. Other studies have shown that periodic batch or pulse dosing of PAA is likely a better method for controlling microbial populations in RAS and flow-through systems, and therefore deserves further study at the concentrations tested during this trial, up to 1.0 mg/L.

These two research trials provided valuable insight into the potential advantages of PAA use in RAS, as well as important guidance towards the development of standard operating procedures for its safe and effective use in these production systems.