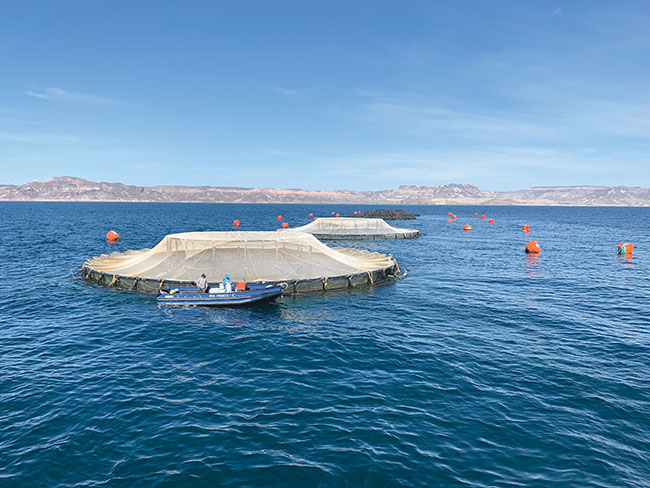 Offshore farm site located four miles from the coast, in water over 230 ft deep, in the Gulf of California All photos: The Kampachi Company

Hatchery manager Mauricio Moreno remembers 2018 as a breakthrough year for The Kampachi Company, an offshore farm in La Paz, Baja California Sur, in Mexico. It broke ground on a pilot hatchery that year and within months made its first delivery of kampachi (Seriola rivoliana) to market. Before the year closed, the company received a fund injection of $5 million from impact investor Sustainable Ocean Fund.

The Mexican state of Baja California Sur was deemed an ideal site to farm and scale up production of kampachi. The species is native in the Gulf of Mexico and “the weather and temperatures are really good for having the best growth rate,” says Moreno.

Jorge Schmidt joined the Mexican venture as CEO in 2016, “bringing in a fresh perspective, financing, and economic and legal expertise,” according to the company.

Describing himself on his LinkedIn profile as a “former litigator and U.S. Army special operations veteran,” Schmidt wrote that he came across the “stalled project” and “quickly arranged for the financing needed to launch The Kampachi Company’s commercial-scale production.”

RAS is key
The funding from Sustainable Ocean Fund helped the company start the land-based hatchery and later install a recirculating aquaculture system (RAS), after the hatchery team struggled with juvenile production issues.

While RAS has long been used in the farmed salmon industry to raise smolts, the technology was revolutionary for The Kampachi Company because it enabled it to raise kampachi larvae year-round. Before it had RAS, larvae perished before they reach juvenile stage when temperatures went up in the summer. This prompted Moreno and his team to stop rearing larvae during the hot months and instead use the hiatus to sanitize the hatchery and prepare it for the next season. With RAS, the team is able to raise juveniles up to 20 grams, by which time they are big and strong enough to withstand the warmer offshore waters.

“Water temperature could reach 30°C or more in the summer. At these temperatures everything changes in a hatchery: water quality, live feeds, and of course a high stress period that were an impediment to reaching an acceptable producation of juveniles for production plans,” says Moreno.

Roughly a year later, Moreno stood before the audience at Aquaculture America 2020 in Hawaii, announcing that he and his team delivered to the company’s offshore net pens in September 2019 the first batch of more than 100,000 juveniles raised in RAS.

“This milestone opened a new window for production in the toughest season of the year, giving us new opportunities to satisfy a high-value fish market in Mexico and in the world,” he says.

But the path wasn’t as straightforward as it seems, the hatchery manager notes. The breakthrough came only after solving several bottleneck issues: broodstock management to obtain high-quality juveniles year-round without hormones; egg incubation crashes; post-hatch sinking larvae; and first feeding mortalities, to name a few.

He attributes the success in navigating those challenges to the team’s shared understanding of what they were trying to achieve. “It is important that all the technical team members really understand what we are trying to give to the larvae. Then it’s easier to have more control on the system and in the rearing techniques because in the RAS system small details make a big difference.”

Moreno acknowledges there are still many issues to contend with. He doesn’t mind though, because he thrives in solving problems. In Spain, he worked with other species, such as Sparus aurata, Dicentrarchus labrax, and argyrosomus regius, which weren’t as challenging to grow, he says.

“With other species everything goes smoothly. But with Seriola rivoliana everyday is a new challenge. Making adjustments, making decisions are the norm.”

The constant adjustments are due to the fast growth of the fish, known locally as “pez fuerte” or “strong fish.” It could grow from larvae to 500 grams – which the company calls “kampachitos” – in five months; and to 2.5 kilograms in 10 to 12 months.

“Because they grow so fast, they have ever-changing requirements. They change the water quality so fast so it’s really a challenge to get them to thrive and develop, and not just make them survive. Being there to understand what’s happening and give them the best things they need to thrive, and for us to have a reasonable number to take offshore is always our goal,” Moreno says. 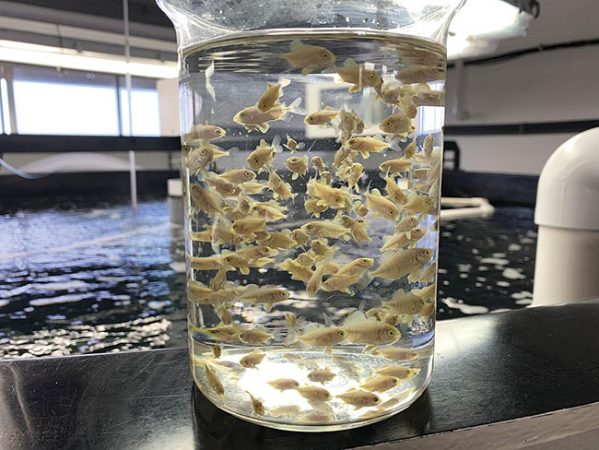 Kampachi juveniles during weaning phase at 22 to 25 days old, weighing about 300 mg each 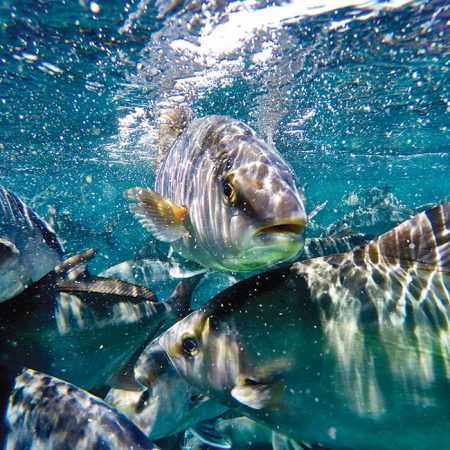 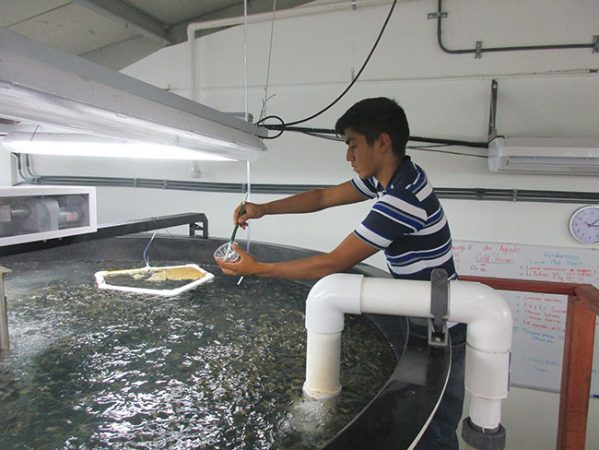 Next steps
Other bottleneck issues in farming kampachi that still need to be addressed include skin fluke (Neobenedenia girellae), considered the biggest challenge in farming the species. At Aquaculture America 2019, company co-founder Neil Anthony Sims said the three- to five-millimeter ectoparasite is itself not a problem for the fish; instead, it is the infection from wounds that develop when the parasite-afflicted fish tries to scratch the itchiness away by flashing against the tank or net.

“The disease impact is a factor that will always be present in any animal production industry,” says Moreno. “What we face is the learning curve about any disease that could be ‘new’ to this species and how to manage it. For now the parasites are the most concerning health issue, and we’ve been able to develop a monitoring and treatment protocol with good results.”

The company also hopes to develop a selective breeding program that will allow it to have the best spawns, consistently.

“The quality of the eggs is very variable, meaning all the quality parameters that we measure in this industry, such as percentage of viability, size, fecundity, color, all those things are not consistent.

“Before COVID-19 we were on the track to start doing this with local genetic research institutes. We will need to retake [this initiative] ASAP when the world comes back from the COVID situation.”

Moreno also notes there is a lot to be learned about the nutritional requirements of kampachi. There are now several ‘Seriola’ formulations, which are of “fair enough quality” but still have room for improvement, he says.

Sims is actively working on developing fish feed for Seriola rivoliana. Ocean Era is collaborating with fish physiologist Dr. Rick Barrows and with the organizers of the F3 Fish-Free Challenge to develop transformative feed formulations that rely less on forage fish.

Market prospects
The Kampachi Company introduced King Kampachi to the U.S. market at Seafood Expo North America (SENA) in Boston in March 2019. But like virtually every business, it saw its main market dissipate with the closure of restaurants because of COVID-19. The company has since kept production going with “the lowest effort” to maintain profitability. Harvests are now processed and frozen. “We have to find that market for frozen fish,” Moreno says.

“The COVID situation changed everything,” he adds. However, he is optimistic that the company has growth prospects in the local market. “Our CEO is looking really closely at the local market, which could be a main market for us, not just fancy restaurants but also households. We are finding that the Mexican market looks really accepting of really good final product.”