The local First Nations community around the Fraser River in British Columbia has renewed hope that a salmon species on the verge of extinction may have just been given a chance for revival.

About 9,000 Endako River Chinook salmon (Oncorhynchus tshawytscha) fry have been ponded and were released into the tributary of the Fraser River in British Columbia, Canada, in June. About 2,000 of these fish came from 20-year-old cryopreserved milt stored for the Carrier Sekani Tribal Council.

This batch of fry is a sign of hope for the local First Nations community after the salmon migration took a devastating blow last year. In June 2019, a massive landslide near Clinton, B.C. created a blockage on the Fraser River and interrupted the migration of thousands of salmon populations.

It was a race against time as First Nations, provincial and federal leaders worked with scientists, engineers and emergency responders to rescue the spawning season. Crews were dealing with difficult engineering challenges to clear the five-metre waterfall blockage, a feat they hadn’t seen since the railway construction in 1914.

Salmon began arriving upstream in July of last year, before the channels were cleared, so crew members were transporting about 60,000 fish upstream by truck and by helicopter. By September, sockeye and chinook salmon were swimming freely only through a small section that had been cleared of debris.

Some of the most affected populations is the Endako Chinook salmon which the First Nations have categorized as “functionally extinct.” Vice-president of the Spruce City Wildlife Association, Dustin Snyder, said the organization had already been in talks with the Carrier Sekani Tribal Council about a collaboration effort to protect the species when the landslide hit.

“The Carrier Sekani have been monitoring this stream for the better part of three decades and it has reached an all-time low,” said Snyder. “When the (Big Bar) slide was discovered, it made the need to help this run far greater.”

At first, Snyder was worried that they had few options to preserve the run. But he was surprised by the tribal council when they told him that they had a stock of cryopreserved salmon milt stored away.

“There was quite a few things to consider,” said Snyder. “One, no one had ever used milt that was that old. So while motility looked good, there was concern around the success rate of the fertilization. Two, we are dealing with a stock considered ‘functionally extinct’ by the local First Nations. Every single egg is precious, there was concern if this didn’t successfully fertilize the eggs, would we have done more damage than good?”

Maureen Ritter, managing director of Canada Cryogenetics Services Inc., based in Black Creek, B.C., was on vacation with her family on Labour Day weekend when she got the call about the tribal council’s 20-year-old salmon sperm. She knew right away that time was of the essence, so she left her vacation to head north.

There were a lot of factors to consider before she could tell the Carrier Sekani Tribal Council and the Spruce City Wildlife Association that the milt samples were ready to be used for fertilization.

The milt sample was something that Canada Cryogenetics inherited when it was established 10 years ago. Before it came into the company’s possession, the Carrier Sekani Tribal Council originally had it cryopreserved by World Fisheries Trust using older straw technology.

“We know that with our technology, we have milt frozen in Norway for 15 or 16 years now. So we have confidence in our technology that this milt can be stored forever, technically,” said Ritter. “Using the older technology was a little bit worrisome and so, it was good to see that it did work.” 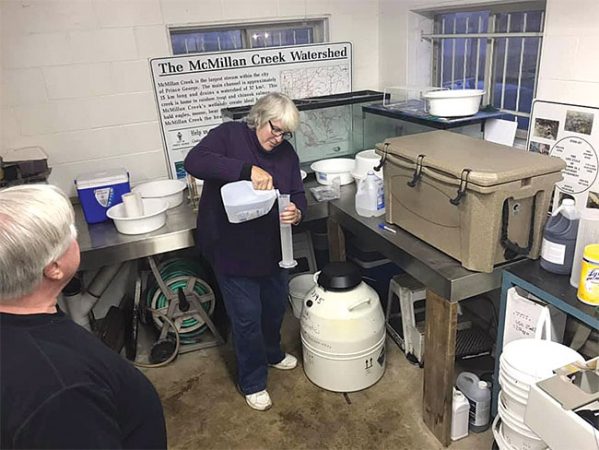 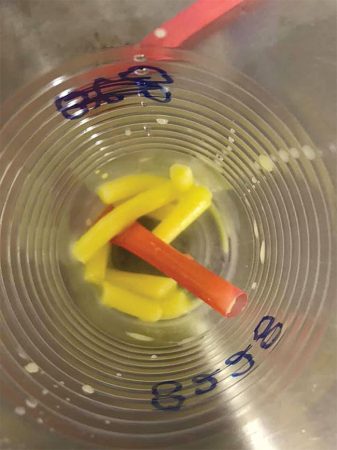 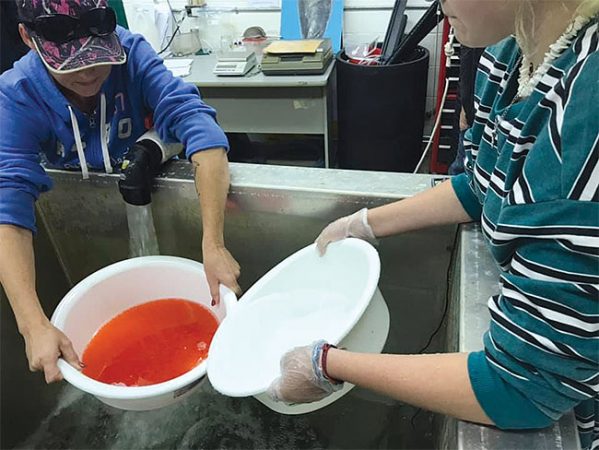 Ritter used an in-house activator and checked for motility in the sperm under a microscope. Once she determined that the sperm were behaving like they’re supposed to, she took two straw samples to the Upper Fraser Hatchery for the fertilization process.

“It was two weeks. It was very quick,” she said. “It was just amazing how it all came together and everybody was as passionate about fish. It was a great group to work with and it was one of those things where you go, ‘Yeah, my job was amazing this week.’”

The evening of the fertilization, volunteers from the Spruce City Wildlife Association, the Upper Fraser River Hatchery, the Carrier Sekani Tribal Council and Ritter from Canada Cryogenetics came together. Ritter said that the room was filled with people from all generations.

“The kids of the volunteers at the hatchery, they were there. They were assisting with the fertilization,” she said. “So that’s always exciting when you get the kids engaged. Suddenly, the kids are paying attention to what’s happening to the creeks and streams and rivers and lakes around them. Once you educate the kids to the importance of the environment and what’s happening with the fish, then they go on to educate future generations.”

Snyder had brought his own children to volunteer that evening.

“My six-year-old and nine-year-old help in the hatchery regularly – feeding, brood capture, fertilization, etc. On our brood capture excursions, it’s not rare to have a few kids kicking around,” he said in an email to Hatchery International. “Sharing knowledge, experience and educating each other is a part of the fun of this program and makes what we are doing feel like a family gathering even if there is 20 people out helping and you only know half of them.”

Members from the larger aquaculture community have also had an opportunity to pitch in to the program. The costs of the cryogenetics services was donated by Whoosh Innovations Inc. from Seattle, W.A. Members of the organization had won a $500 certificate from Canada Cryogenetics at a raffle during last year’s Northwest Fish Culture Conference in Victoria, B.C. When they heard the story of the Spruce City Wildlife Association’s project, they decided to donate their winnings to their cause.

Volunteers at the Upper Fraser River hatchery fertilized about 2,000 eggs using the 20-year-old salmon milt. Another 7,000 eggs were fertilized with fresh milt from male salmon that have migrated up the Fraser River and into the Endako River tributary.

The fry were set to be released in early spring this year. Due to the remote nature of the Endako River, the summer release will be assisted by helicopter.

Because of delays caused by COVID-19 lockdowns, Snyder also mentioned the number of hatchery volunteers will be limited this year to practice social distancing as much as possible.

Snyder said the whole community is looking forward to releasing the fish in their home river and then seeing them back upstream to spawn in the future.

“Hopefully it means there will be more salmon in the future,” he said. “The region’s people, the region’s wildlife and the region’s ecosystem, all who once relied on the Upper Fraser salmon stocks have moved on and some have forgotten. I believe there is now a revived hope, that we can make change and that we can do things that will ensure the future generations of salmon here are not in the same dire situation that they currently are.”