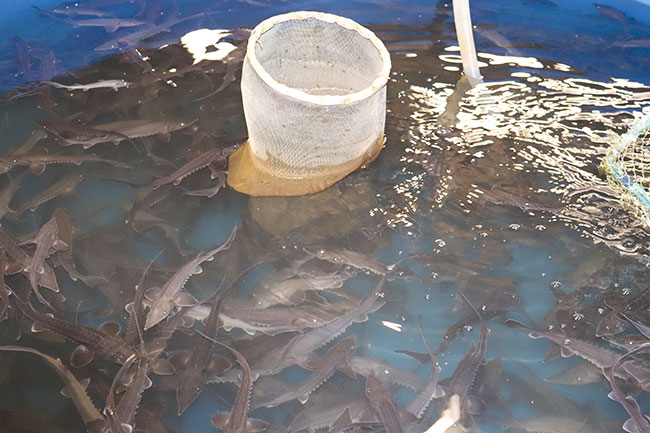 Photo: Ministry of Agriculture of the Republic of Kazakhstan

The Kazakh Ecology Ministry has approved a draft decree under which fish farmers can get a 50 per cent reimbursement for the costs of broodstock in 2022.

These new measures are part of an ambitious aquaculture development program embarked on by the Kazakh government in 2020. The main goal of which is to ramp up the domestic farmed fish production from 7,000 tonnes in that year to 270,000 tonnes per year in 2030.

The ministry also stipulated that fish farmers are eligible for a 30 per cent compensation for aquafeed and a 50 per cent reimbursement for veterinary drugs. Hatcheries are allowed to return 50 per cent of other production costs from the national budget. Businesses can also get compensation for the costs of electricity, fuel, water, and wages.

The authorities pledged to secure funding under the project of 541 billion tenges of investments (US$1.3 billion), which makes this program the most expensive fish farming development campaign in post-Soviet space ever adopted.

Kazakhstan hopes to ramp up fish farming production in the next few years.
Photo: Glavrybvod

Kazakh Ecology Minister, Magzum Mirzagaliyev, said state subsidies introduced to compensate production costs are considered the main point of the new program. He said that the government already compensated some costs associated with the purchase of feed, and equipment for fish farms, adding that this “was clearly not enough to take the industry off the ground.”

With the new program, Kazakhstan aims to become a major fish exporter, selling farmed fish for some US$330 million per year to foreign customers.

Speaking during a press conference in December, Kazakh Prime Minister Askar Mamin expressed confidence that in the context of the growing demand on the global food market, the country has a real opportunity to become one of the world’s leading suppliers. Mamin called the authorities to make the country self-sufficient on food by 2023.

Kazakh fish farmers depend on the import of broodstock, aquafeed, and equipment. It was estimated that the country needed to build at least seven to eight big hatcheries to overcome dependence on imported broodstock.