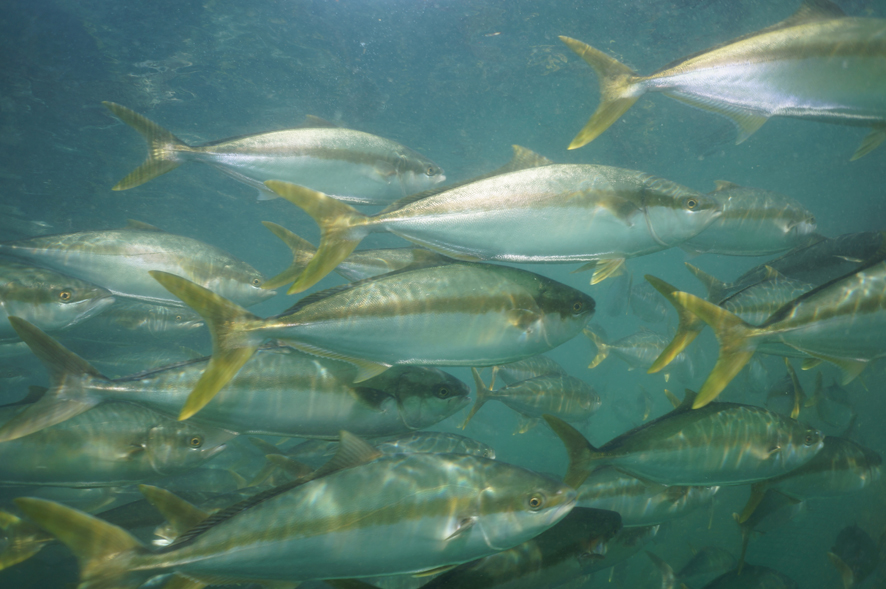 Success to date in designing

Things are changing in Mexico. Government promotion of marine fish culture is picking up thanks to efforts by the National Aquaculture and Fishing Commission, the National Fisheries Institute, and public policies being implemented by the Secretariat of Agriculture, Livestock, Rural Development, Fisheries and Food.

This is by way of background to a new marine fish hatchery recently built for Ocean Baja Labs (OBL), a Baja Seas company, at Eréndira on the Pacific coast just over 200 km south of the US-Mexican border at Tijuana.

Baja Seas has already constructed an ocean growout site at Bahia Magdalena, 1100 km further south in Baja California Sur, where they are currently growing yellowtail amberjack or Hiram’s (Seriola lalandi). Fingerlings were initially purchased from Hubbs Research Institute of Carlsbad, California, and transported by boat to the growout site. They are now being harvested as Baja Seas’ first commercial crop.

Thus, the two developments, hatchery and growout, proceeded in parallel: growout began at the same time as hatchery construction started and the breeding program commenced. They have now come together with the first spawnings at the hatchery this year, but Baja Seas plans to continue purchasing fingerlings to maintain genetic diversity among the broodstock, and also to guarantee a backup source of fingerlings.

According to Luis Astiazarán, Director General of Baja Seas, there was a clearly perceived and growing demand for high quality seafood north of the border, and a lack of development in México.

Seriola lalandi was selected because it is a high value species that is not yet a commodity, and would compete directly with other high value finfish and give economic stability during startup. As a species it has good conversion rates, has been cultured elsewhere, and, importantly, is native to Baja California. However, there are challenges: the species is difficult to breed, and requires very high quality feeds. There is not much room for error and the investment required is very high.

Ocean Baja Labs engaged Roberto Flores – an oceanographer researcher with over 25 years experience – who worked closely with Hatchery Manager Mauricio Moreno and a multidisciplinary team of consultants, and researchers, to develop the concept, and begin the planning. Fortunately Seriola species are widely distributed and much experience has been gained internationally in their domestication and culture. Fingerlings are available on the international market, and in time, Baja Seas plans to offer fingerlings for sale as well as supply its own farm.

According to Astiazarán, the first step was to hire consulting services from the AKVA group, Sagiv Kolvovsky from Australia, and other international consultants, who provided the technical foundation for the project. Some equipment came from AKVA but as much conventional equipment as possible was purchased locally in order to facilitate maintenance and parts-supply, and keep overall investment as low as possible, without sacrificing state-of–the-art technology. Construction started in September 2012, once all of the environmental impact permits had been issued.

Asked about the thoroughness of the permitting process Astiazarán said that some 23 local, state and federal agencies were involved, including Fisheries, Taxation, Land-use, Health, Environment, Communications, etc., but in general the process was very efficient. The governmental agencies were very open and clearly aware of the opportunity to have better regulation and support for the industry. The process took about eight months, and required substantial effort by the company to prepare the comprehensive and detailed documentation that was needed.

Construction of the 2500 m2 building was completed and the equipment installed in March 2013. Testing the equipment started in April and May and the first larvae were received for a trial run in June. These were purchased from ACUINOR – a Chilean yellowtail hatchery, well known for its research, and year-round availability of fish. They were grown to an average weight of 100 grams and a small sample shipped to the farm at Bahia Magdalena for growout and observation.

Seawater is drawn directly from the Pacific ocean via an intake that is about 3 m below sea level and protected against storms. Water passes through sand filters before entering the hatchery building. The temperature ranges from 18-21°C in the summer to 15-18°C in winter.

Oxygen, temperature, flow and PH are monitored regularly by the staff, and water samples are taken for bacterial culture to ensure there is no pathogenic contamination. Emergency backup systems for pumps, oxygen, electricity, and other critical systems are in place. Mexican wastewater discharge regulations include some effluent quality conditions, which the company currently meets comfortably due to their present filtering systems.

The whole operation is monitored by three Point Four systems: two monitoring two broodstock and 12 larval-rearing tanks each, and the other controlling six weaning and three rotifer tanks. Overall pumping capacity is 800 l/min, and there is a backup water storage capacity of 230 m3.

In the nursery area there is ongoing research with CICESE into soy-based replacements for fish-meal and fish-oil. To date, there have been five formal research projects with each of these institutes, plus two with the state government and two more with the federal government, all with specific production-related objectives.

The hatchery is equipped to grow a continuous supply of live rotifers, and Artemia in batch production, and they are also using a microalgae paste to complement first feeding with live feed. However, there is a new plan to produce microalgae on site using high-tech methods jointly developed with collaborating research institutes. Compared with other marine fish species, raising Seriola is complex because of the large numbers of rotifers and Artemia needed, and in turn, the large volume of microalgae needed for enrichment.

Fingerlings are typically grown through to about 20g, which may take from 30 to 60 days, depending on size at which they are ready for shipping to the cage site (some may be shipped as small as 5g). Shipping has been done by boat using water drawn directly from the sea, when dissolved oxygen is monitored and augmented as needed. The company is currently developing a truck-mounted fingerling transport unit. Annual production capacity is estimated at 1,000,000 20g juveniles.

Having made some adjustments to the system based on experience gained during the trial run, the hatchery is now fully operational. Nevertheless there remain some significant challenges. Astiazarán noted that being one of the first commercial full-cycle, marine fish hatchery facilities in Mexico means that many critical activities, technical assistance, or specialized services cannot be outsourced. They just don’t exist in Mexico, and will have to developed by Baja Seas’ staff, or brought in by consultants, until the industry becomes much larger.

Because full-cycle marine fish production is basically new in México, government regulation, technical assistance, feed and aquaculture-supply providers are extremely limited. The company is clearly at the bottom of a long learning curve, but their success to date in designing, building, equipping and getting the hatchery running has built confidence for their ongoing success.

The breeding program started before the hatchery was built, with the capture of wild yellowtail, average weight 3 kg, off the coast of Ensenada, 100 km to the north. These were housed at CICESE (Centro de Investigación Científica y de Educación Superior de Ensenada) for approximately eight months, and then moved to the OBL hatchery to start their conditioning program. The fish are now mature and average 9-10kg in weight. Each has been tagged and sampled for a genetic identification program, which will commence shortly. A second lot of wild-caught broodfish is scheduled to occupy a second and third tank. The fourth tank will be stocked with F1 fish from the first broodstock; the start of a selective breeding program.

At the moment one lot of broodfish has been allowed to spawn naturally, but in future spawning will be induced by controlling temperature and photoperiod using a program designed for optimum spawning and fish well-being.

Broodfish are sexed and tagged before they are put in to tanks (except for the first lot which went directly into the tanks for conditioning). Fish spawn while they are free-swimming and the fertilized eggs are collected in containers connected to the tank via a water flow system that carries the eggs to them.

The aim is to provide a stress-free environment, and adequate nourishment for growth and maturation, and year-round larval production. Each broodfish is monitored, and its progress recorded. The company has developed strict health- and biosecurity programs, with frequent visits by and recommendations from expert veterinarians and pathologists.