After twelve years of research and tons of ups and downs, this unique project transitions from pilot to pre-commercial production 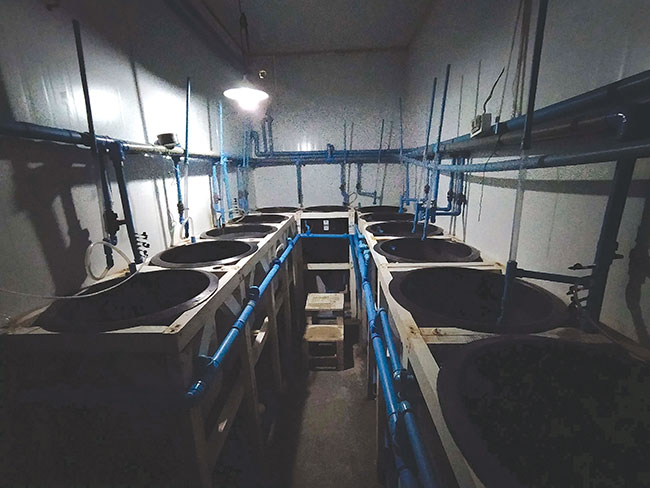 A team of researchers headed by local marine biologist Alberto Reyes has completed farming all life stages of Chilean sea bass (Dissostichus eleginoides), becoming the first successful effort to capture, breed and rear this species in captivity. The work of these researchers on Chilean sea bass, also known as Patagonian toothfish, have been published in several journals.

As an outcome of this research study, the team has established the company, Seabass Chile, to organize its farming operations and administrative activities, and eventually scale up the project to pre-commercial and commercial production.

In the mid-term, Seabass Chile expects to reach an annual production of around 100 tons, with a final production goal of about 1,000 to 1,500 tons per year, to avoid any market imbalances.

Chilean seabass
The Chilean seabass is the most expensive of all Chilean seafood species. It is a delicacy at top restaurants worldwide and is prized for its mild flavor and firm, milk-white flesh.

The general manager of Seabass Chile, Alberto Reyes, describes the species as a “noble fish to be farmed, a very robust and docile fish to be domesticated and handled in tanks.” These carnivorous fish live at depths of more than 1,000 to 1,500 meters. They ascend through the water column during the reproductive season, where they release their eggs at depths of between 300 and 500 meters.

Those ova, ranging from 2.3 to 2.5 millimeters in diameter, have positive buoyancy and their embryonic development occurs as they rise in the water column. When the ova reach the top, the larva hatches and finds its food within a 30 to 40-meter surrounding area. When they grow to juvenile stage, they begin to migrate.

“In the early stages of this initiative, we hired oceanographic consulting services as one of the first things [we did], so that they could characterize those environments, from the point of view of CO2, nitrate, pressure, light, etc. Thus, we were building a referential scenario regarding what environment to imitate in the tanks,” Reyes says. “We estimate that this fish will take approximately 42 to 44 months to reach six kilograms, from ova. However, in [natural environments], these fish can live up to 50 years and weigh more than 200 kilograms. Currently, 80-kilogram fish, and even 40-kilogram, are increasingly scarce,” he adds.

The project proponents also worked with Dr. Gidon Minkoff of Teleostei Hatchery Consulting. Minkoff previously worked on the development and production of Black cod or sablefish (Anoplopoma fimbria), a North Pacific deep and cold water fish that inhabits a niche very similar to that of Chilean seabass.

“When the wild broodstock fish in captivity belonging to Seabass Chile started showing signs of gonad development, I came over to Puerto Montt on a number of visits, to work with the staff on developing biopsy methods and following the egg maturation process in vivo. I also assisted in evaluating the process of vitellogenesis from start to finish, taking into consideration the time frame for the process and being able to predict when to expect the fish to spawn. Following this, I participated in the spawning, provided protocols for egg fertilization, and evaluated the spawning rhythms of the fish,” Minkoff says.

He also contributed to the development of the larval rearing process and in determining the most suitable conditions of light, food, green water and weaning for producing these fish.

“Apart from work with the fish I have advised on system configuration, particularly the egg and larval rearing systems, with some input also into the design of the live feed (rotifer and Artemia) production systems,” he adds. 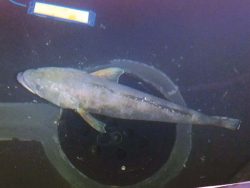 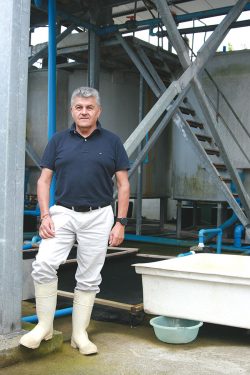 Alberto Reyes, general manager of Seabass Chile and leader of the team of researchers behind this project 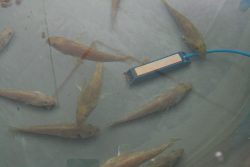 Chilean seabass juveniles of between 150g and 200g

Hatchery
Located along the coastline near Puerto Montt, Chile, Seabass Chile operates a 600-square-meter hatchery, which includes two small laboratories and four large rearing rooms, which consist of: one incubation room with 13 incubators (12-cylinder conical tanks of 400 liters each and one-cylinder conical tank of 1 cubic meter in the event of massive spawning of some female fish); one larval room, with four tanks of 1 cubic meter each and four tanks of 500 liters, where the first feeding is carried out and fish are kept until they reach juvenile stage; one room for juveniles, with three tanks of 3 cubic meters each; and one breeders’ room, with two tanks of 30 cubic meters each. All these rooms operate on independent recirculating aquaculture systems (RAS).

Intake water is pumped from a floating platform located on the sea. The water flows to a header tank, which feeds a small distribution tank where the water is filtered and disinfected with mechanical and UV filters. The mechanical inlet water filter is a sand filter. There is also a rotary filter in the larval and juvenile rooms, while in the breeders’ room there is a battery of sand filters. Between 96 percent and 97 percent of the water are recirculated.

Due to the high variability in the surface temperature – especially in the summer months – water temperature is lowered using five chiller units. Throughout the year, temperature ranges from 4 °C to 10 °C in the rooms.

“Our operation is almost 100 percent manual. We do not use automated data capture systems, neither temperature nor pH, CO2, nitrate, nitrite, alkalinity or O2,” Reyes says, adding that this facility operates 24/7 with a staff of seven people, including professionals, technicians and assistants.

The hatchery was built by the educational institute La Araucana in 2006, to teach students about salmon farming. By 2009 and due to a strong decrease in students’ enrollment caused by the outbreak of the infectious salmon anemia virus in the country, the facility was repurposed for the Chilean sea bass project headed by Reyes in 2008.

Catching of wild breeders for the project began in 2009 and continued every year until 2012, when females caught from the wild started spawning in captivity for the first time. The following year, the project – funded by the Chilean scientific development fund, Fondef – had larvae in the first feeding stage, producing the first group of juvenile fish born in captivity by the second half of 2013.

The project faced one of its major setbacks between 2015 and 2016, when La Araucana pulled its support and the project was almost discontinued. This was also the turning point that led them to establish the company Seabass Chile. Production resumed around 2017 and 2018 when the company cquired crucial funding from the Chilean economic development agency, Corfo, and cooperation with the Austral University of Chile. 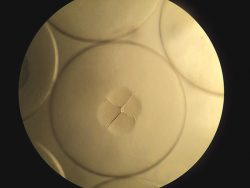 When Patagonian toothfish are ready to reproduce, they ascend the water column from depths of up to 1,500 meters. 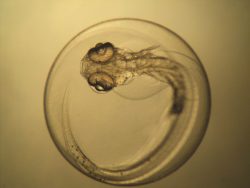 The eggs are released higher in the water column, about 300 to 500 meters from the surface. 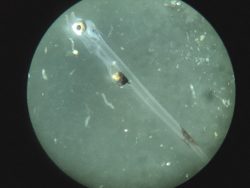 The eggs then travel to the surface of the water where they will hatch. 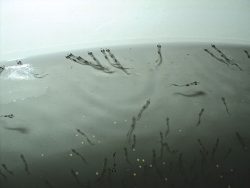 Larvae feed on the surface where they can swim up to 40 meters to find food.

Future plans
With the pilot phase of the Chilean sea bass project concluded, Reyes explains that the pre-commercial phase has a timing of about four years, where annual productions of less than 100 tons are expected to be achieved.

“The orders of magnitude of the investment, where there is some flexibility, should not exceed $3.5 million. Then, when scaling up to 1,000 to 1,500 tons, it requires a much stronger investment, but on the basis that there is already a productive system going on. In these figures, we include investments in improvements and adaptations to produce juveniles here and the construction of a new facility for the fattening stage,” he explains.

As all calibers are in demand right now, the size of the fish is not a limiting requirement to access the market. However, the company has established that the harvest size will be an average of six kilograms to avoid early maturation and fetch a good market price.

“We consider it reasonable to produce in the future between 1,000 and 1,500 tons per year, in order to access that market space that is unsatisfied. Caught Chilean sea bass will continue to have the seal of a wild product that comes from the most pristine waters versus this other one, which is cultivated and comes from a recirculation system. This has a very desirable effect that would discourage illegal fishing and the black market, as there is a complementary source of supply for when the quota is over,” Reyes says.

One of the challenges facing wild-caught fish, particularly long-lived species like the Patagonian toothfish, is polychlorinated biphenyls (PCB) contamination. Reyes believes the work they’ve done with closing the breeding cycle for this species will help minimize, even solve that challenge.

“Since we are talking about fish with a maximum of six kilograms with a bioaccumulation of these compounds, if there is any, [PCB is] likely to be so low that it will be within the norm levels. On the other hand, the wild product is also exposed and supports part of the arguments that are the criticism of environmentalists,” he says.

The increasing temperatures in the sub-Antarctic zone, as a result of global warming, is also another challenge that the fishery industry is facing that will affect market availability of the Chilean sea bass.

“I would dare to say that the fishery in a few decades will begin to face some failures in the recruitment of new fish that are integrated into the adult fraction because, due to global warming, these larvae will see their probability of survival diminished. In that scenario, the farms could return the favor to the fisheries. From this point of view, this investment initiative has a strong environmental component and is a tool to alleviate some consequences that climate change could generate in the reproduction of this species”.