One of Australia's rarest freshwater fish species is being brought back from the brink of extinction through a crowd-funded program that researchers hope will secure the species' survival. 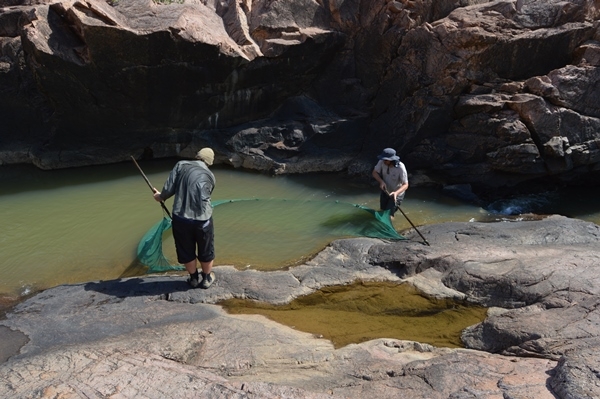 The Running River Rainbowfish – not to be confused with rainbow trout – is native to just a 13-km stretch of the river of the same name, in the upper Burdekin catchment near Paluma. That’s about 80kms northwest of the township of Townsville in northern Queensland.

A couple of years ago Dr Peter Unmack, a researcher from the University of Canberra, was part of a small team of fisheries researchers in the upper Burdekin. They were monitoring the region’s freshwater fish populations, and Unmack discovered that the Running River Rainbowfish was under threat of extinction, mostly due to the presence of a non-native relative which had been introduced upstream.
Fish-pic-new.png

Unmack said it was “just by luck” that the researchers were in the area sampling at the time, and they noticed there were a few of the foreign rainbowfish down in the main part of Running River. So they went upstream to take a look and found “thousands” of the invaders. This made them realize the natives were in trouble.

Apparently, the Running River Rainbowfish is a particularly colorful variety, and as a result is well known to aquarium keepers around the world.

But with only minimal government money available to help conserve the species the University of Canberra group took it upon themselves to go online to attract the cash they needed.

And because of the significant interest, much of it from overseas, in the popular aquarium fish, the group decided to go for crowd-funding through different clubs which were encouraged to donate money to support the project to bring the fish “back from the brink.”

The crowd-funding effort brought the group some $12,000 that now has been spent for trips to collect a total of 207 of remaining Running River Rainbowfish to breed them in captivity. They will later be released into a new environment in Puzzle and Deception Creeks, upstream of Running River and separated from the original range of the species by high waterfalls.

There the experts hope to avoid further dilution of the Rainbowfish gene pool in an area owned by the Australian Wildlife Conservancy (AWC).

Master’s student and research assistant Karl Moy, also from the University of Canberra, has adopted the fish for his thesis project, and started breeding the special fish in captivity. So far, he’s reported to have released around 4,000 fingerlings in the two creek systems, beginning earlier this year.

He’s cited as saying that to date they’ve been doing well and the population is spreading throughout the catchment to add to the ones spawning and breeding successfully in the wild.