Justin Henry thinks he’s got some pretty good fish eggs for sale. Northern Divine Aquafarms produces certified organic, fertilized, female monosex, coho salmon eggs. “I think we are the only company in the world doing this,” says Henry, the General Manager of Northern Divine, based in Sechelt, just north of Vancouver, British Columbia in Canada. 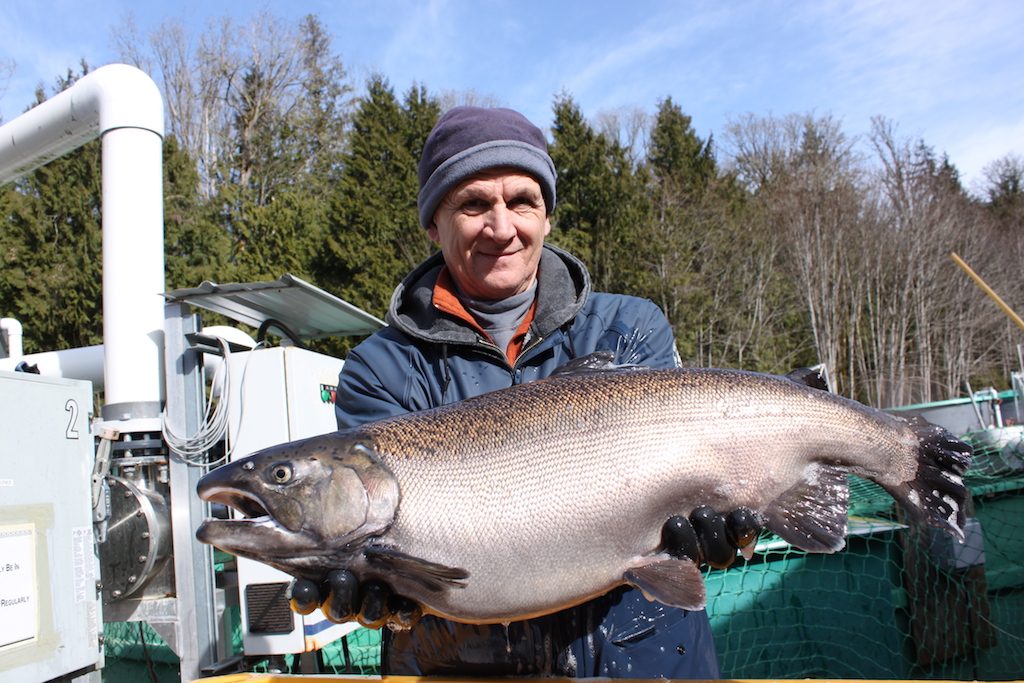 Formerly called Target Marine, the company began as an integrated coho aquaculture facility with hatchery and net pen-growout systems in 1986. The current owners bought the company in 1994.

Broodstock was initially sourced over a period of three years from the Kitimat River in Northern BC and has been selectively bred for growth, disease resistance, body conformation and color for over 30 years.

“Our breeding program has remained incredibly diverse,” says Henry. “We have never had to go back and collect more stock.”

As an aquaculture species, coho have a number of advantages and when you factor the all-female component, you can literally double those advantages, Henry explains.

“Coho have a fast growth rate that really sets them apart from other salmon,” he says. “In salt water at an ambient temperature between 6 – 20°C, a 50g smolt typically reaches 3 kg in 13 months.” That rate can be increased in a controlled system with optimal rearing photoperiod and temperature, Henry adds.

It’s a great product Henry maintains. “Coho are a bright silver colored salmon,” he says. “The flesh can be a very dark red and they are leaner than Atlantics or chinooks. Chefs looking for something a bit out of the ordinary love them.”

The quest for females

But it’s the coho roe, that got Northern Divine on the quest for an all-female population.

“In the olden days of salmon farming, the roe was just being thrown into the offal tote with the rest of the guts to go for rendering,” Henry recalls. “One day a customer asked if we could send him some of the roe so that he could make ikura, or salmon caviar. We did, and at the end of the season he sent us a cheque for $7,000.”

“Well, we didn’t throw out any more roe,” Henry chuckles. He says coho roe has the second highest market value to that of chum salmon, which is only sourced from the wild. Indeed he should know, Northern Divine also raises white sturgeon for caviar and flesh sales.

“We wondered if it was possible to produce an all-female population,” says Henry. “It took 10 years, but that is what we did. It’s a similar process to that used for rainbow trout and chinook but its trickier.” He says the process is proprietary, and complex, involving manipulating various environmental conditions. “But we are certified Organic,” he adds. “So that tells you something.”

Producing an all-female egg multiplies the benefits of raising coho. With an all-female stock, you are able to save costs. “There is no risk of precocious males that will need to be taken out of your production,” Henry says. “Because there are no males, you are able to push your smolt growth faster without worrying about the risk of jacking.”

“And if you are looking to do Ikura, with all-female fish you have double the roe.” Henry notes.

Over the years Northern Divine phased out the net pens and fresh salmon sales and moved all their broodstock holdings onto land. A full RAS system re-uses 99% of their water.

“We are in an isolated situation with excellent ground water and our land-based system allows us to be certified disease-free,” Henry points out. He says the company is certified by the Canadian Food Inspection Agency (CFIA) compartmentalization program, that follows the guidelines of the World Organization for Animal Health (OIE). The program includes specific premise requirements to ensure that the exported eggs are consistent with international standards for aquatic animal health management.

“The compartmentalization from CFIA allows us to more easily export our eggs,” says Henry. “We are currently shipping across North America as well as Europe, Asia and South Africa and we hope to be servicing the Chilean market soon.”

Temperature and light controls allow them to have four spawn cycles with extended windows of availability. “We are able to ship eggs throughout the year,” Henry says. “Trays of 50,000 live eggs, on ice in insulated boxes, can go around the world.”

Customers are diverse. Salmon farmers are adding them to their sites Henry says. “Coho are resistant to ISA and to sea lice so adding coho to a location can be beneficial.” Henry acknowledges that it is a niche market, but one that pays a premium.

“The feedback we get is that the trout farmers who have tried them are sticking with them,” says Henry. “They are looking to diversify, they find that the growth is amazing and they like the benefits of the all female. That’s the opportunity we are offering our customers.”