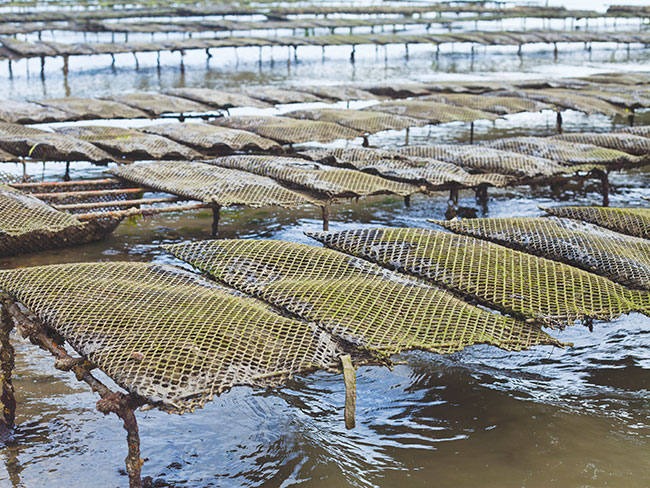 A recent study has revealed that Atlantic Canada oysters may be reacting differently to ocean acidification than what earlier research has generally found.

A hatchery in New Brunswick, Canada, has teamed up with researchers from the Canadian government’s Fisheries and Oceans Canada to study the tolerance of oysters from Saint-Simon Bay in Northern New Brunswick of decreased pH in ocean waters.

“The oceans are a massive sink for atmospheric carbon dioxide,” says Jeff Clements, lead author of the study. “At one point in time this was thought to be a good thing since the oceans could reduce CO2 in the atmosphere and perhaps slow climate change, but what we’ve come to learn is that this extra CO2 is changing the chemistry of the oceans, with potentially deleterious effects for marine calcifiers,” explains Clements.

Ocean acidification describes the decrease in seawater pH due to the oceans absorbing excess carbon dioxide from the atmosphere.

When carbon dioxide reacts with water, it creates carbonic acid, and that reduces the oceans’ pH, making the seawater more acidic.

While ocean pH is not actually acidic by definition, the change in ocean pH presents a challenge for marine life. A major consequence is that shellfish like oysters have a harder time making shells.

The experiment was conducted at the L’Étang Ruisseau Bar oyster hatchery in Shippagan, New Brunswick.

“The experimental trials were designed to investigate: (i) the impact of low pH on the progress of oyster conditioning in both males and females; (ii) whether parental conditioning history had any intergenerational effects on the status of the offspring larvae 48 h post-spawning; and (iii) whether low pH exposure during spawning and embryogenesis affected larval status at 48 h,” according to the study published in the ICES Journal of Marine Science.

Contrary to earlier study findings of the negative effects of ocean acidification on oysters in the eastern United States, the recent New Brunswick oyster hatchery trials found that their Atlantic Canada counterparts are showing improved reproductive development in the same conditions. The study also found that while oyster larvae tend to be smaller and likely to develop deformities with low pH levels, their survival rates are actually higher.

“To our knowledge, this is the first study showing such positive effects of low pH on this species of oyster, which is quite promising,” says Clements.

The researchers attribute the toughness of the oysters in this region to a long history of exposure to low pH conditions.

“The estuarine waters in which these oysters have evolved are very dynamic and show large natural fluctuations in pH due to events like freshwater runoff and daily fluctuations driven by photosynthesis – these waters regularly experience episodes of low pH,” says Martin Mallet, co-author of the study and hatchery manager at the L’Étang Ruisseau Bar oyster hatchery.

“I am cautiously optimistic that Eastern oysters may be more resilient than other oyster species, like for example the Pacific oyster on which much of the initial work on ocean acidification was done,” he adds.

Both Clements and Mallet admit that there are some caveats to the study that are important to note. For example, the relatively short time periods to which the oysters were exposed to low pH means that longer-term studies are needed to see if there are any effects of chronic exposure.

Overall, however, they think their results provide room for cautious optimism for the region and hope to follow this study with more work in the future.

“This isn’t just good news for the oyster industry in Atlantic Canada, but it’s also great news for industry and government research in the region,” says Clements.

Mallet agrees. “We have a great relationship and plan to continue working on research projects together in the future.”