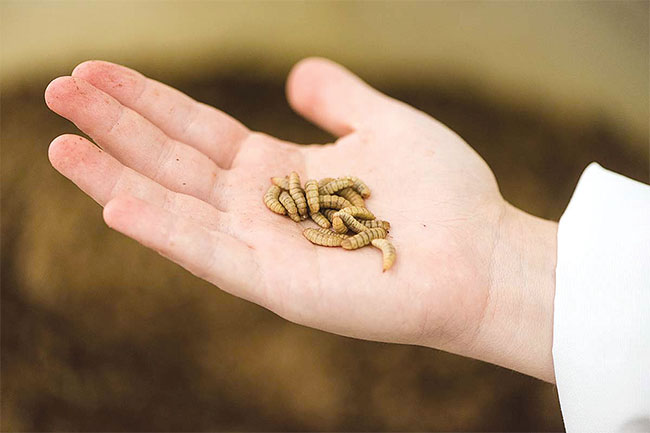 The black soldier fly is the superfood of superfoods.

Scientifically known as hermetia illucens, this common fly is gaining traction in aquaculture as a key ingredient that will help the industry keep up with the world’s growing demand for fish and seafood. Not only is it a nutrient-packed protein for aquaculture, pet food, animal feed and human nutrition, but it is also one of the most efficient animals in converting compost waste into biomass.

To sustainably and nutritiously feed 9.8 billion people by 2050, the World Economic Forum estimates that global food systems must transform at an unprecedented speed and scale. Aquaculture currently supplies half of the world’s demand for fish and seafood. Since many wild fishing stocks are facing intense depletions, the Food and Agriculture Organization of the United Nations says aquaculture will need to supply two-thirds of the world’s seafood requirements by 2030. Without this industry, the world will face a shortage of about 50-80 million tonnes.

The first signs of strain in this fast-growing industry can be seen in fish feed production. Falling supply and rising demand for marine protein meal is turning this once tried-and-true product into a high price commodity.

In the last decade, feed manufacturers and suppliers have been looking to plant-based alternatives like soy and algae, but vegetable proteins have even higher environmental costs.

Insect feed might be the next frontier in developing alternatives to supply aquaculture’s pursuit to feed the world. 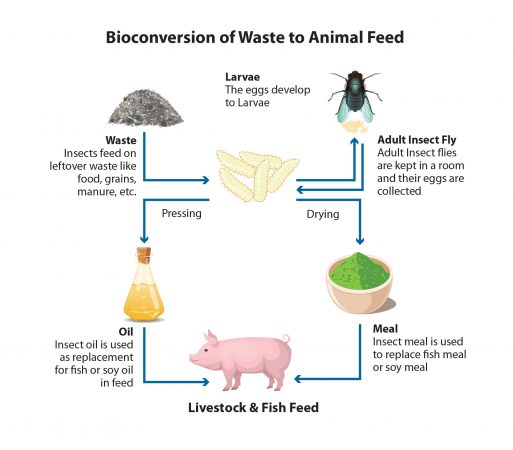 Race to innovation
Research studies around the world continue to stack up on the benefits of black soldier fly larvae as a viable alternative for animal and fish feed. At its larvae stage (14 days), it is packed with amino acids, rich in nutrients and can contain up to 43 per cent of protein.

Skretting is a global manufacturer and supplier of aquaculture fish feed. It has been conducting internal testing of its insect feed formula since 2014. Because insects are an important natural food for wild fish, internal tests and research showed that black soldier fly larvae meal provided essential proteins and amino acids with low levels of “anti-nutritional factors.”

But like with many novel raw materials, the challenge of taking this innovation to commercial production is finding insect meal suppliers that can produce enough volume at a consistently high quality.

So, when Skretting Norway was finally able to acquire enough supply for their pilot project in May 2018, one hand immediately shot up to volunteer their fish farm to test out the new insect meal formula.

“When we presented that we were able to get a hold of a quantity of insect meal, Nordlaks was out there straight away,” says Siri Tømmerås, who is the product manager of land-based fish farming at Skretting Norway. “We have a good relationship with them and we also know that they are quite innovative when it comes to their production. They have a very strong sustainability approach.”

With the new supply ready in May and a new project partner in place by June, Tømmerås says they had to have a quick turnaround to launch the pilot project later that year. Nordlaks, a salmon and rainbow trout farming company in northern Norway, tested the new feed formula on its 360,000 fry.

“They were reporting numbers of feeding and also the weight of the fish, how it has responded and how the fish was behaving in the tank, and giving feedback weekly,” says Tømmerås. “We’re research people so we want to have all the facts on the table but numbers-wise, we saw a good growth in the insect meal group… We were pleased to see that the fish liked this feed as much as the standard feed.”

Tømmerås says this is a good sign for Skretting Norway’s research team because it means that the insect feed could be trusted in real-world applications and not just in research findings published by controlled research centres around the world. 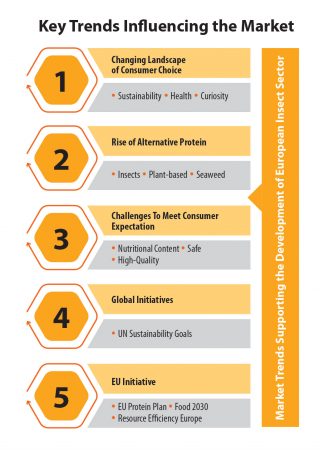 Alternative routes
Insect meal will never completely replace fishmeal, according to Helene Ziv, director of risk management and sourcing and international feed supplier, Cargill. Although insect meal has the same characteristics, in terms of digestibility, protein content and amino acid profiles, it won’t eclipse the demand for fishmeal as a tried-and-true ingredient.

“(Insect meal) is very similar to fishmeal so it can replace it 100 per cent in a feed formula, but for aquaculture in general, it’s not one or the other. Both ingredients are super important for aquaculture,” she says.

Twenty years ago, fish feed was mainly made up of marine raw material because it was the easiest and most natural ingredient for fish stock. Fishmeal and fish oil rely on wild catch of small pelagic fish, such as anchovies in Peru, jack mackerel and sardines in Chile, and blue whiting, capelin and sand eels in Europe.

As supplies started to decline, feed producers began to feel the pressure. Market research by Rabobank Research Food and Agribusiness in 2015 attributes a decline in supply for small pelagics from lower wild catch and an increase in direct human consumption of these species.

“With a rising population, failing local fisheries in rivers and lakes and an increasingly higher cost of animal protein, demand for small pelagics is only expected to grow,” the report says. Rabobank’s researchers predict that fishmeal will become a “high-price, strategic ingredient” as feed producers look for other protein sources.

Cargill is one of the largest suppliers of fish feed in the world. Right now, Ziv says the company’s goal is to find new and sustainable options for its farmers, customers, governments and communities. What is most attractive about developing an insect meal is its potential to reduce environmental costs to produce protein products.

“We have made some studies as to what is the best larvae or the best fly and there are a few other production alternatives, but we think the black soldier larvae is the most suitable for feed,” says Ziv. “I would say it’s a combination of quality, research results and the capability of this product to be scaled-up in volumes.”

Ziv says Cargill’s research centre has been developing insect meal formulas for several years, also developing insect oils for poultry feed products. However, its new partnership with French biotechnology, InnovaFeed, has allowed them to scale the feed production enough to test out their formula in a real-life fish farm, Lerøy Seafood in Norway.

After a year of successful trials, Cargill is partnering with more European fish farms and hatcheries to test out their fish feed formulas. However, Ziv says it will still be a while before Cargill is ready to set a price on their products.

“There is no real public market or price right now. The insect feed on pilot are not yet a fair representation of what the price will become. The first large-scale plant with our partner, InnovaFeed, will be in place at the end of this year or maybe January 2020,” says Ziv. “We know it will bring a lot of value to our customer, in terms of the solutions that we can bring.”

Insect farming
Insect farming facilities, like Oreka Solutions in Ontario, Canada, are growing quickly to keep up with the demand for high quality product. CEO Jon Duschinsky says the main challenge of scaling up their products is engineering.

“If you’re a chicken farmer, you go to the companies that build chicken farms to get everything you need. There are well-established, standard operating procedures for you to do that. But who would you call up about building an insect farm,” says Duschinsky.

The insect farming sector is currently a small tight-knit community of entrepreneurs, scientists and engineers. But producing products at a large, commercial scale is something that each company is developing in their own way, says Duschinsky.

A 2018 study by Rabobank Research Food and Agribusiness reports a 40 per cent increase in investments in the insect industry over the last four years. Some of the largest investments were received by companies who are growing black soldier flies, such as AgriProtein, Protix and InnovaFeed.

“Producers need to upscale to meet the continuous demand for insect proteins, and to reduce production costs in order for insects to compete with fishmeal and other alternatives,” the report says.

Oreka Solutions is focused on providing a premium product to trout and tilapia hatcheries in North America. Black soldier fly larvae is the main product ingredient, not only because it is an alternative protein source for fishmeal. Duschinsky believes that Oreka’s scientists have developed a product that maximizes the nutrient potential of the insect.

“What we’ve learned about the black soldier fly in the last five years has literally changed the game, and by harnessing it, not just using it as a protein, the results we’ve been seeing in aquaculture particularly, have been amazing,” he says. “We’ve seen hatcheries where mortality rates have dropped by 50 per cent by using our product, just by introducing that piece of nature back into the food chain.”

Oreka Solutions was founded in 2014 with the idea of harnessing the potential the black soldier fly can have in the environment and agriculture. Duschinsky calls the insect “the best kept secret in entomology.”

Black soldier flies are considered a clean food source to cultivate. Its larvae, which has a life span of about 14 days, mainly consumes compost food waste which can be sourced from agriculture and other food production facilities that would otherwise send their waste to landfills.

Black soldier fly larvae consume about twice their own body weight every day. Their digestive systems naturally destroy harmful bacteria that might be present in their food, which means it is a lot easier to keep them at food grade when it is time to harvest the larvae as meat.

As adults, female black soldier flies reproduce rapidly, up to 500 eggs at a time. It is not considered a pest species because it is not attracted to human habitations of foods. It does not carry disease. In fact, it prevents houseflies and blowflies from laying eggs in the material inhabited by black soldier fly larvae.

“There’s a lot of talk few years ago saying that the oceans are the final frontier, but I think the final frontier are insects,” says Duschinsky. “The black soldier fly has been kind of one of these well-kept secrets but think about it, if you start to think like an insect, then some really cool things start to emerge and that’s kind of what we’ve done.”