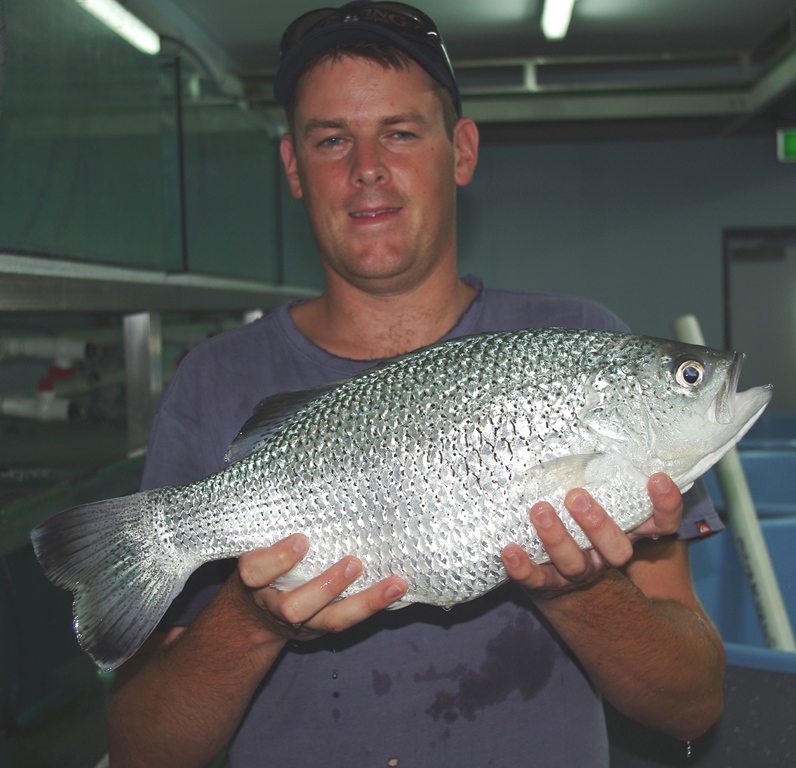 The Bribie Island Research Centre located north of Brisbane has been a pioneer in aquaculture research in Australia. Commissioned 25 years ago, the 15ha facility has access to both marine and freshwater, and has been instrumental in the development of Australian tropical and sub-tropical aquaculture. A recent success (reported in Hatchery International, Vol 16-3) has been the spawning of jungle perch (Kulia rupestris) destined for the large angling community in Queensland.

tropical northern NSW. They can grow up to 50cm and weigh more than 3kg. They take flies and lures and their fighting properties and the rugged habitat they inhabit has made them a prized trophy fish. Their numbers have been in serious decline for many decades and remnant populations are isolated in a few remote areas, mainly in the tropical end of their range.

The Queensland Department of Agriculture & Fisheries (QDAF) and recreational angling groups have worked together to reverse this decline. Based on their successful breeding and re-stocking program, co-funded by a grant from the Fisheries Research & Development Corporation (FRDC), they are writing a hatchery production manual for a scaled-up commercial restocking initiative.

After commencing work in 2012, the program’s first hatchery-reared jungle perch were released in 2015. Dr Michael Hutchinson, the lead researcher of the project, said by liberating the 1,000 conditioned fingerlings into a Gold Coast Hinterland stream in which jungle perch had once thrived, the micro tagged fish could be closely monitored.

At the time of writing the fish were growing and dispersing throughout the system. But, more importantly, Hutchinson was confident the team’s efforts would lead to the commercial production of jungle perch and the aquaculture industry’s ability to re-establish the species throughout its natural range.

Dr Hutchinson said the main blockage had been getting the larvae to feed. “There were a whole lot of variables that had to be eliminated as we established what worked and what didn’t. They take a smaller feed than most larvae at a first feeding, and keeping the supply of copepod nauplii high was crucial to achieving high survival rates. We aimed for 900-1,000 nauplii per litre. Optimum egg condition, ovulation triggers, salinity, temperature, sperm motility, are just some of them that had to be lined up so we could write the manual for commercial use.”

For genetic integrity they used broodstock mainly from two populations: one from Fraser Island (latitude 25ºS) and another from tropical Proserpine (20°S). They found that each performed best at different temperatures and salinities. The southern (Fraser Island) strain feed at lower temperatures and their sperm motility required higher salinity. Dr Hutchinson put this down to the higher wet season rainfall and more direct sunlight. They hold over 160 broodstock at the Bribie Island Centre.

The broodstock are conditioned at 22-23ºC during the winter months, and are brought up to 26ºC for six weeks before being induced to spawn with Overprim. Males are given 1ml/kg and females 0.75ml/kg.

In an earlier study, an honours student from the University of Tasmania, working backwards from the daily growth rings of otoliths of two-month old jungle perch had established that in the wild they spawn on the new moon. Hormonal induction allows the team at Bribie Island to override that trigger and they induce spawning runs to coincide with a healthy copepod bloom in the ponds, usually three weeks after they are flooded. Dr Hutchinson said that this was the key to a successful result.

“The larvae are 1.8mm at hatch with a small gape. If you get a big rotifer bloom the results are negative. Jungle perch larvae just won’t touch rotifers. To maximize the copepod bloom, we’ll seed the ponds with hatchery-reared [copepod] stock.”

The fish were spawned in 3m fibreglass tanks holding 7,000 l of water. Tank colour didn’t seem to make much difference (the tanks they chose were blue) but lighting did. They used fluorescent lighting directly above the tanks. The copepods, drawn to the light, concentrated at the surface. Having this concentration made a huge difference to survival rates. Even in the ponds the fish larvae aggregated near the surface, where the light is,” Dr. Hutchinson said.

They selected younger females weighing 1-2kg and chose males from 250-1,000g; three males per female. Females are selected on egg size. Being serial spawners, they’ll carry more than one batch of eggs at any given time. When they find females with better than 50% of the eggs in the 380-400µm range they inject them with hormones to stimulate spawning. The eggs swell to 650-700µm when water hardened.

Spawning and incubation is at 28ºC in full salinity seawater in a recirculation system. Ovulation takes approximately 48-56 hours. The eggs are pelagic and are collected in a 300µm screened egg basket set in the outflow channel. Incubation takes around 12 hours. Larvae are ready to feed in three days and swim bladder inflation occurs between five and six days. Metamorphosis is between 28 and 34 days post hatch, and they can be weaned onto a 400µm powdered larval diet after 21 dph.

Weaned larvae are released into 15m x 15m plankton ponds. Once the larvae have reached 8mm they will start taking Artemia, and at 12mm they’re feeding on larger pond life such as chironomid larvae. By day 50 they average 25mm and are ready for harvest and release.

Filamentous algae can be a problem and they dye the ponds to reduce water clarity once Secchi disc depth exceeds one meter. This allows the phytoplankton bloom to return and a zooplankton cycle to follow. As the larvae are surface-oriented feeders, especially when they’re following the copepod bloom, aeration was found to be crucial. Paddlewheels should be avoided because larvae feed near the surface. Instead they use air stones to keep the water turning over gently and well oxygenated.

Jungle perch are very fecund, producing 400,000 eggs/kg. Spawning on a monthly basis from four breeding teams at a time, has given the Bribie Island operators a ready supply of subjects upon which to run the trials necessary to integrate the wide range of variables that yield commercially viable results.

Rd. Hutchinson believes that with these bugs ironed out and using commercial sized plankton ponds with well-managed plankton blooms, harvests of 20-30 stockable fry per square meter are possible.

Liberation site selection is based on several criteria – their historical record comes into it of course, but water clarity, passage from the estuary to the upstream reaches, and healthy riparian cover, both remnant and those replanted by conservation groups are important considerations.

The first draft of the manual is being drawn up for review and the hatchery operators who have visited the Centre have all shown an interest in including jungle perch in their catalogues.

In a world increasingly bemoaning the loss of a species through urban and/or industrial encroachment, the jungle perch recovery breeding program has been a success story of some magnitude, and a credit to the dedicated researchers at Bribie Island and their partners at James Cook University and the Freshwater Fishing & Stocking Association of Queensland (FFSTAQ). The aquaculture world looks forward to further developments.