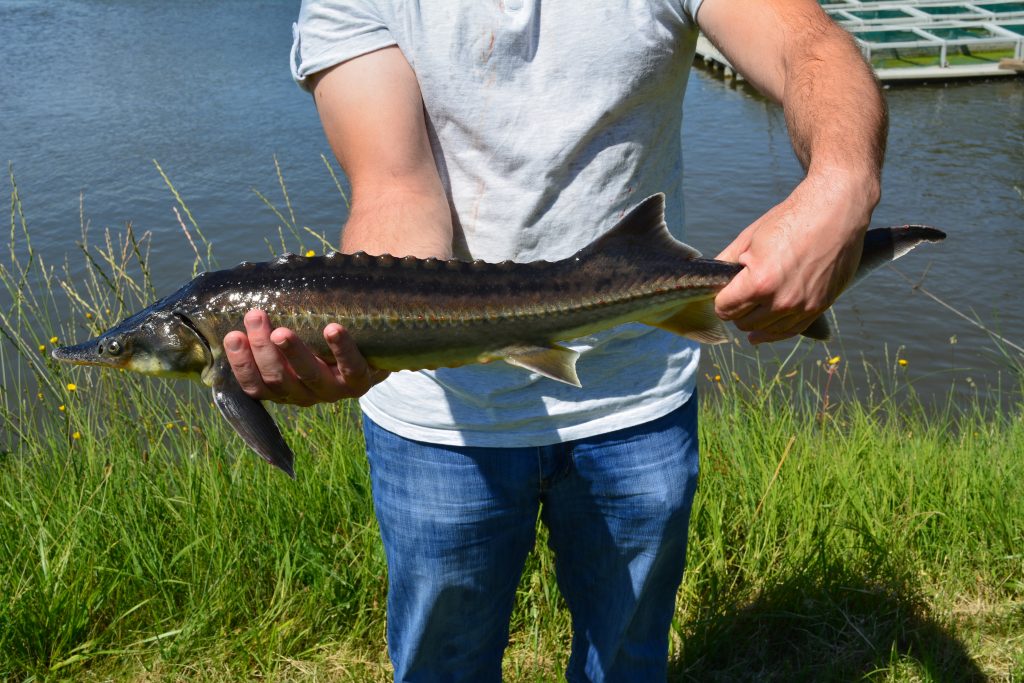 The world’s first sturddlefish – a hybrid of the American paddlefish (Polyodon spathula) and the Russian sturgeon (Acipenser gueldenstaedtii) – continues to transfix the world with its unique appearance and how it got to be. Their appearance varies; some took after their Russian sturgeon mothers, others after their American paddlefish fathers and some have both features.

“This hybrid is primarily of scientific significance,” Dr. Jenő Káldy, research leader on sturddlefish, told Hatchery International. “This is because it raises many questions in the fields of genetics, evolution research and microbiology, but also in the fields of ethology or paleontology. However, there are some implications for aquaculture: it needs to be reconsidered whether escapees of farmed non-native American paddlefish into natural waters can pose a threat to native sturgeon stocks.”

The research was conducted at The National Agricultural Research Centre, Research Institute for Fisheries and Aquaculture (NARIC-HAKI) in Hungary.

“However, it is also conceivable that, for example, in the pentaploid hybrid form, male individuals are able to produce fertile sperm. But this is only an assumption, not scientifically substantiated,” he said.

Asked for its potential for aquaculture, Káldy said, “If it would consume plankton, the growth and fatty acid composition of its meat could be favorable compared to other sturgeon species commonly reared.”

Examination of qualitative and quantitative properties relevant to aquaculture was not performed in the research. There is still no data on the quality of meat of the hybrids.

Some hybrid fish have high growth vigor but there is a large variance between individuals. This, he said, would require an extensive approach including a series of trials. They have established that some individuals can reach a body weight of as much as three kilograms in one year.

“But there is also a difference between the triploid and pentaploid hybrid forms and between the individuals belonging to each form. Incidentally, we observed that triploid forms have higher growth vigor than their pentaploid counterparts,” he said.

The creation of sturddlefish was unplanned. Scientists were conducting an experiment at NARIC-HAKI to strengthen the native Russian sturgeon stock using American paddlefish milt through gynogenesis. Since this is a method of asexual reproduction that requires the presence of sperm without the contribution of their DNA for completion, the hybridization was unexpected, the team said.

The experiment was repeated and same results were confirmed. This was documented in, “Hybridization of Russian Sturgeon (Acipenser gueldenstaedtii, Brandt and Ratzeberg, 1833) and American Paddlefish (Polyodon spathula, Walbaum 1792) and Evaluation of Their Progeny?” published in the journal, Genes.

The “unique forms of appearance of some individual” of the hybrid gives sturrdlefish the potential for ornamental fish farming, the study said.

NARIC-HAKI has no plans to produce the hybrid for commercial purposes.