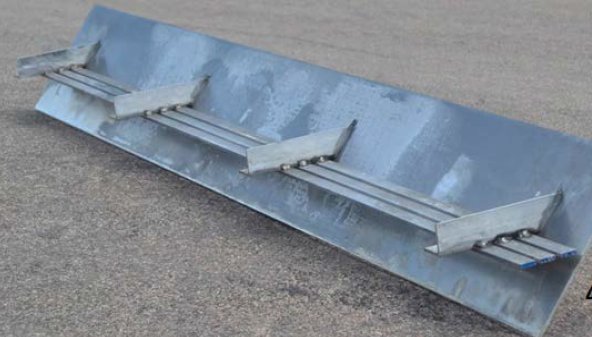 Splash plate prior to raceway installation In the US state of South Dakota hatchery staff demonstrate the advantages of a new system to replace conventional raceway dam boards and screens.

In a recent paper published in the January issue of the World Journal of Engineering and Technology, staff at the McNenney State Fish Hatchery described the thinking behind their new aluminum raceway splash plates:

“The idea came about because the 65-year-old concrete raceway walls had started to move, which meant our existing screens no longer fit,” McNenney hatchery manager Mike Barnes told Hatchery International. “We were going to have to either buy/make a number of new screens, or refabricate the existing screens to fit specific raceways. Because the walls on each raceway were moving differently, each screen would have to be unique for each raceway slot; standardized sized screens could no longer be used.”

The hatchery staff were looking at having to either purchase or remanufacture 48 screens (three screens of different bar sizes – increasing bar sizes as the fish grow – for each affected raceway section), or come up with some kind of unique and more permanent solution, he explained.

Serial reuse raceways are sequential rectangular units commonly used during rearing of salmonoids where water enters an upper raceway before subsequent discharge into a sequentially lower raceway. The raceways in the series are typically separated from each other by dam boards or vertical walls, with vertical screens placed at the head end of each raceway to prevent fish from jumping from one raceway into another.

Vertical screens in raceways are susceptible to plugging from aquatic vegetation or airborne debris such as leaves or litter particularly when rearing fish requiring small screen mesh sizes. Such plugging of raceway screens restricts water flows, potentially leading to decreased oxygen levels and increased physiological stress, resulting in an increased probability of disease outbreaks and a general decline in fish rearing performance.

As fish grow, plugging issues can be reduced by increasing screen mesh sizes, although considerable labor may be required to remove and replace screens depending on the number of raceway sections.

Patrick Nero, and students Kelby Torgerson and Dan Johnson) built their novel aluminum splash plates and installed them on eight serial raceways used at the hatchery.

The splash plates were evaluated during hatchery operations with multiple rainbow trout and brown trout strains, at fish sizes ranging from 30 to 2000 g, and under raceway water inflows ranging from 600 to 2000 L/min.

No fish movement between raceways was observed and in addition, the use of these splash plates increased dissolved oxygen levels in the incoming water up to nearly 1.8 mg/L. The increases in dissolved oxygen after the water flowed over the splash plates was similar to that observed in serial reuse raceways using triangular notch weirs, and greater than the increases observed during the use of sharp crested weirs, the researchers wrote in their paper.

The use of the splash plate is advantageous and an improvement over typical designs used in trout and salmon hatcheries. Labor is reduced because screens do not have to be monitored and cleaned. In addition, the need to change screen sizes in relation to fish sizes is eliminated, not only reducing labor, but also decreasing the numbers and sizes of screens in inventory. The large risk to fish health of having screens plugged is reduced.

“We’ve been using this new splash plate for a couple of years now, with no issues except for an occasional brushing during extremely heavy loadings to remove organic matter,” Barnes said. “I think we were all surprised by how much time these new splash plates have saved us.”