High among the Andean mountains of Peru, at 3100m (10,230 ft), in the cordillera popular with visiting mountaineers and hikers, is the small village of San Bartolommeo de Acopalca. It has a population of about 225 families. 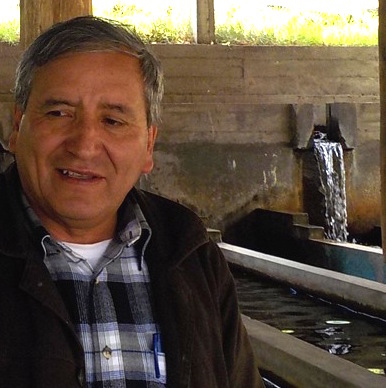 The people of the village of San Bartolommeo de Acopalca own this fully vertically integrated rainbow trout hatchery and growout farm in the Andes.

The village is different from most others in that its organization is somewhat like a Mexican ejido, wholly owned and operated by its inhabitants. What’s more, the village has the only fully vertically integrated rainbow trout hatchery and growout farm in Peru. The operation includes everything from broodstock selection, egg incubation, larvae, alevins, juveniles, growout and marketing, as well as the development and manufacture of appropriate nutritionally balanced feeds.

The hatchery administration and staff are 100% drawn from the village, and all profits flow back to the community. By contrast, all other fish farms in Peru are managed by private corporations and not by native communities.

Oncorhynchus mykiss is not native to Peru, having first been introduced as eyed eggs shipped from North America in the mid-1920s, but trout are now extensively farmed in the Lake Titicaca region, eight hundred km to the southeast, where all the fish are raised from imported fertilized eggs. Trout figure prominently in the menus of Peruvian restaurants, particularly in inland area where it is served fried, broiled and steamed, and very often as ceviche, a Peruvian favourite.

The Piscigrana de Acopalca occupies an area of 3.5 hectares on the outskirts of the village, and has a large pond and some 66 outdoor raceways of different sizes. The smallest ones are used for fingerlings, and the fish are moved into progressively larger ponds as they grow.

The original facility was built in the 1970’s, but was extensively refitted about 25 years ago, and major development has occurred since then.

Financing came initially from “Cáritas Huari,” a Catholic Church charity that “develops and funds programs that help the poor.” According to piscigranja manager Leonidas Amado Morales,

Cáritas Huari transferred its interest to the community of Acopalca about eight years later (in accord with an earlier agreement between the charity and the community) so the facility is now wholly owned and operated by the village.

The hatchery draws its water from the River Purhay, which flows from a beautiful Andean lake, Laguna Purhay, some 3 km away and 400m higher up the mountainside. Water is delivered to the site by gravity via a concrete channel and diverted, as required, into the different ponds and raceways, No pre-treatment is required. Discharged water is returned to the stream that runs alongside the site.

Water temperature ranges seasonally from 11.5°C in winter, to about 16°C in summertime, perfect for rainbow trout. Laguna Purhay has its own introduced population of rainbow trout, and is the source of broodstock each breeding season. The availability of wild-caught brood-fish eliminates the need for holding brood on-site. The laguna is in a National Park, which is a popular recreational destination, with campsites and picnic tables.

Breeding takes place in April through August when water temperature is falling, and the eggs are incubated through the southern winter in flow-through trays. Once hatched the alevins are transferred to small raceways for weaning, and fingerlings and juvenile fish are later transferred to progressively larger raceways.

Many of the raceways are shaded by fruit trees, an additional crop for the villagers. Regardless of size, each raceway normally holds 5,000 fish, but stocking density is lowered by about 50% in summer, because oxygen concentrations are lower at high temperature and high altitude. Too high a stocking density results in lower growth rates and increased mortality.

Fish can reach market size (200-250 grams) in about eight months. Market-sized fish are sold out of raceways conveniently located close to the gate, and total annual production is in the order of 50 tonnes. The farm sells fish locally and throughout Ancash county. The village also owns a small chain of fish restaurants, which adds to the market potential.

Alevins are weaned, and fish are subsequently fed, with feed formulations developed and manufactured on site, thus reducing costs and improving profitability.

The principal feed ingredient is Peruvian fish-meal, complemented by maize and soy beans, roasted, milled, formulated and extruded on site. Lipid is provided by a vegetable oil. Pellet size is carefully controlled to reduce waste. There is no added astaxanthin in the formulation that would provide the traditional salmon pink colouration, so the flesh is a pale yellow, drawing its colour from the roasted maize in the feed formulation. The fish are known locally as ‘trucha blanca’ (white trout), but this pale colouration in no way affects their popularity. Production is increasing year by year, and the future of the facility seems to be in good and careful hands.

I am indebted to Ing. Amada for escorting us through the farm and explaining its working. He may be reached at: leonidasamado@hotmail.com, but I would strongly suggest writing in Spanish.