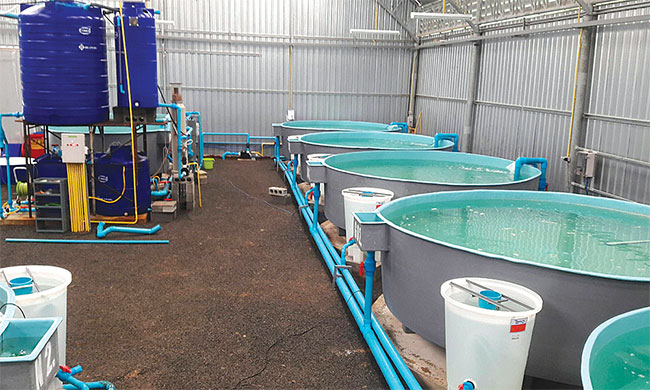 For scuba-divers-turned-fish-farmers John Bethell, Frank van der Linde and Mark Shandur, every fish they grow is one less fish harvested from the ocean.

The trio, who now operate Eco Aquaculture Asia (EAA) in Thailand, previously worked together in the scuba diving live-abroad industry, when they noticed an alarming decline of reef fish due to commercial fishing.

“We started this business because we had witnessed firsthand the destructive and damaging effects that commercial fishing fleets were having on the region’s wild fish stocks. Depletion of large wild reef fish, and damage to the reefs and underwater environments, led us to believe there must be a more environmentally-conscious way to go about supplying the fish that are in such high demand here in Asia, and globally. The answer to this is to utilise modern technology via land-based recirculating aquaculture systems (RAS),” the company owners state on their website.

EAA started as a grouper hatchery and a nursery facility, located on the east coast of Phuket Island, in Thailand. The company commenced operations by buying grouper fry from Bali. Not long after that, the owners quickly found it very challenging to keep fry alive after the stress of air transport. So, when a hatchery on the southern end of Chalong Bay became available, the owners purchased the site and expanded the company into an integrated land-based operation with a hatchery, nursery and grow-out facility.

Operations
The Chalong Bay site has been operated by EAA for the last three years. Three 800-meter intake pipes are only used at high tide, due to the shallow bay. Sea water (32 to 34 parts per thousand) is pumped first through Zeolite filters, then past a large UV array, consisting of 12 150-watt lights, then through a protein skimmer where ozone is introduced, and finally through drum screen filters to the storage tanks. From there it is moved to six independent RAS systems that are used for either brood stock, hatchery or nursery purposes.

EAA has 23 staff, 10 at the northern nursery site and 13 working at the southern hatchery. The company has a fish veterinarian on retainer and uses the expertise of the Thai fisheries branch for virus testing for Viral Nervous Necrosis and Iridovirus.

The company’s eight giant grouper broodstock, 60 to 80 kilograms in size and nearly 17 years old (they can live up to 80), originally came from Fisheries-reared stock. When asked about other disease issues, Bethell says they first dealt with vibrio brought on by air transport stress. To alleviate transport stress and to cut down on the use of styrofoam shipping containers, the company invested in a FishPac, an Australian-designed stackable live fish transport tote with built-in oxygen tank and two-stage regulator.

Grouper market
The Thai market for grouper is seasonal, with the highest demand occurring between December and January, peaking during Chinese New Year. EAA sells several different kinds of fry, which depending on the species can sell for four to eight baht /cm ($0.12 to $0.25 cents). Normally, a 10-cm fish can go to sea cage or ponds for grow-out. The company currently offers four types of grouper fry: brown marbled/tiger grouper (Epinephelus fuscoguttatus), which has been farmed in sea cages for 50 years and can reach market size in eight to 10 months; coral trout (Plectropomus Leopardus), a hybrid cross of Epinephelus fuscoguttatus x E. lancelatolatus, which reach market size in five months; a second hybrid Epinephelus fuscoguttatus x E. polyhedron; and Mouse grouper, Cromileptes altivelis. 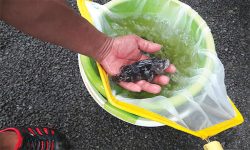 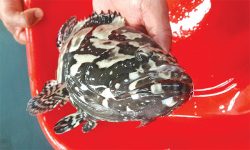 Sustainability roots
EAA was founded with sustainability as its top priority. So it was a natural progression for the company to start manufacturing its own customized feeds. The company’s goal has always been to produce a 100 percent sustainable feed, using no fish meal or fish oil used in the pellets.

Together with EAA’s in house nutritionist the company has been conducting fish food trials with black soldier fly protein larvae meal. This larvae meal is a product from Protix, a Dutch pioneer in insect meal production, and the results have been very encouraging, according to the owners.

Another exciting feed trial that was just completed is a shrimp feed formula. This formula has been tested successfully with both Monodon and Vannamei shrimp, and the company plans to start growing shrimp on this formula.

R&D
Groupers are very sensitive, and high stress levels often lead to disease. EAA has been experimenting with different colored tanks as well as different shaped tanks to reduce stress. It’s currently testing a system – round tanks painted black with 24-hour photoperiod for the larval stages – that’s being used by a colleague in Mexico raising Amberjack. Those recommendations are currently being tested and refined.

The company has also been using copepods instead of rotifers, which has resulted in a stronger and faster growing fry.

To reduce risks the company’s broodstock are split between its two sites. Grouper are protogynous hermaphrodites, meaning the young fish are predominantly female, which later can turn into males. They need to reach three kilograms to reach sexual maturity.

The company has looked at cryogenic sperm preservation, especially since one giant grouper can produce 200ml to 300ml per extraction, and only 1ml is needed to fertilize a million eggs. Sperm can also be held for four days on ice without cryopreservation.

Bethell says there is a lot of variability present when marble grouper are ready to spawn, including the moon cycles. A new moon in Phuket or a full moon in Penang might affect spawning, for example. He also wonders how the brood can sense moon phase when they are raised indoors.

All these questions will be answered as the company refines its fish culture techniques to raise sustainable grouper.