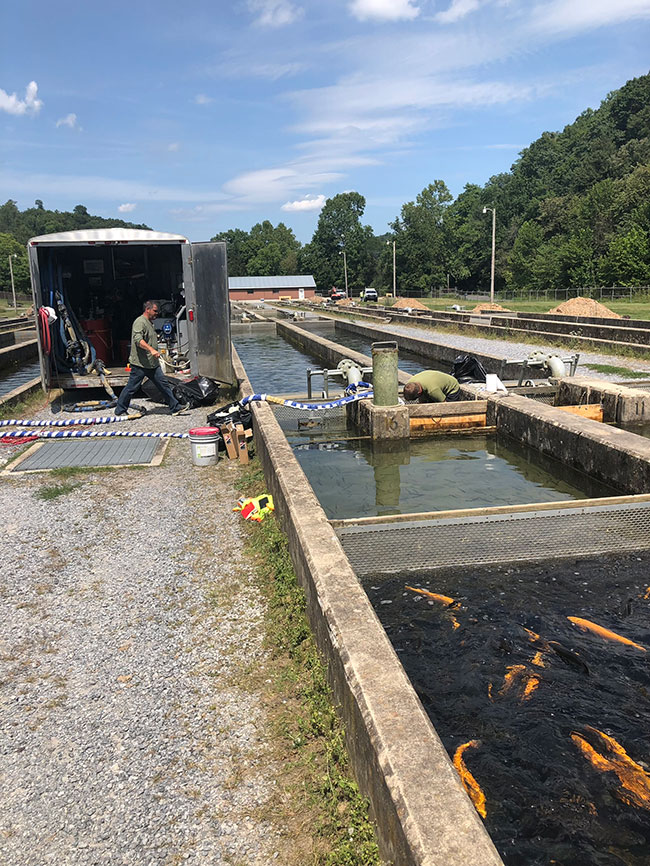 One of West Virginia’s largest trout hatcheries was losing about 100 gallons of water a minute from leaking pipes that eroded soil beneath the concrete slabs the facility was built on.

“Massive voids as large as VW Bugs had appeared beneath the slabs,” said Andrew Tucker, a geotechnical remediation expert that facilitated the emergency repair. “The water was pouring from the carrying pipes and through the concrete side walls of the runways and flowing beneath the slabs, so the voids had gotten large.”

Tucker’s company, High Caliber Coatings was hired by the Department of Natural Resources for the emergency repair at Reeds Creek Hatchery in Franklin, West Virginia. The leaking spring system channeled hundreds of thousands of gallons that fed the runways where about 750,000 lbs of eggs, fry and fish were kept.

Tucker and his team injected about 7,000 pounds of TerraThane geotechnical polyurethane to fill the voids in the pipe system while he and his team repaired the side walls.

TerraThane is a polymer created with NCFI Polyurethanes, which is certified NSF/ANSI safe for use in drinking water. Once flowed throughout the pipes system, the polymer material slowly expands to fill the entire cavity then cures in place to become infused with the surrounding soil. A polyurea is then vertically injected into the cracks of the side walls to seal them.

“TerraThane is lightweight, easier to use, causes less disruption, and cleans up easily. A two-man crew completed the job in three short days,” said Tucker, who has 14 years of experience in the geotechnical and coatings industry. “We can count on NCFI products every time. Plus, their customer service and technical support is the best in the industry. They’ve been very good to us.”