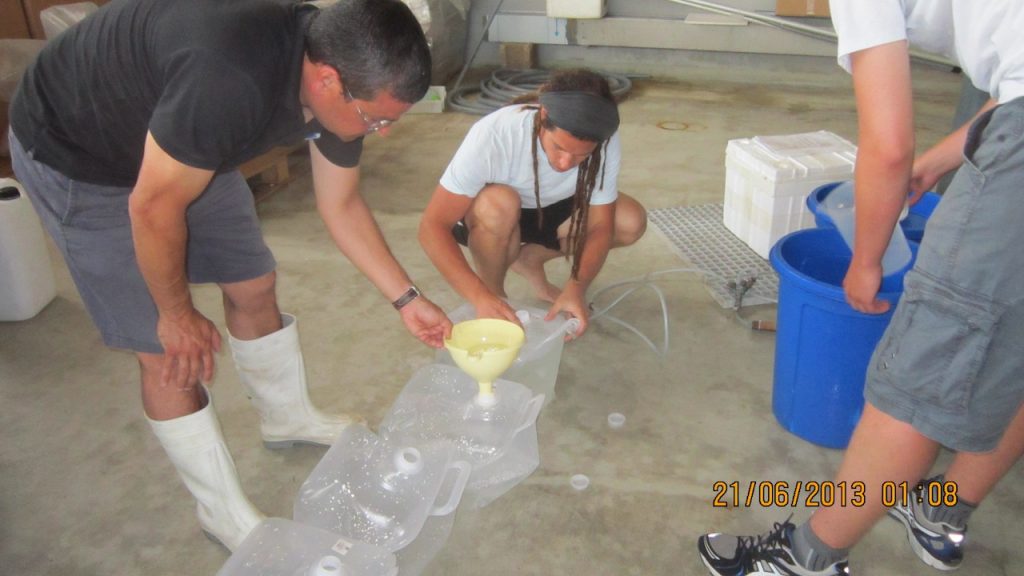 Dr Chris Bridges, who works with several organizations under the EU 7th Framework Research Project confirmed that the main spawning centre this year was the Malta Fish Farming Ltd site in southern Malta.

Bridges, who acts as a spawning induction expert in the program working out of Heinrich-Heine University in Dusseldorf, Germany, said that the collection of eggs within the project was considerably enhanced this year with the extensive use of a special kind of trawl net with fin mesh that is deployed outside the main broodstock cage where the spawning takes place.

A Korean company has been working with the net at the Malta site for a couple of years but this year the net was used for the main program because of its anticipated greater efficiency over the curtain technology previously used inside the broodstock holding and spawning cage.

Bridges explained that the collection is all to do with the timing of the spawning – around 3:00 a.m. – and the comparatively strong currents that carry the rising eggs outside the pen. The currents flow through the fairly large-mesh net at more than 10 cms a second catching the eggs rising slowly from the bottom of the 30-metre-deep cage. In the past the eggs were carried outside the cage before they could be captured by the PVC collection-curtain.

Egg-collecting members of the project team tend to arrive at the site about 4:50 a.m. By this time many of the eggs have risen up through the mesh to the surface, where the new trawl-net aids in their collection. About 10% is collected – an improvement on the curtain-style collector used inside the cage.

Bridges also noted that the fixed collection “trawl net” is designed to reduce the number of unwanted species and so-called “alien fish.” More often than not, he said, wild fish such as mackerel and sardines will go into the cage, attracted by the broodstock feed. They can stay and become trapped by the mesh, and often end up feeding on the newly-born larvae and eggs.

It’s also not unusual for wild tuna to be attracted to the cage, and for hungry dolphins to follow them. “We’re conducting what we call dolphin-friendly aquaculture,” Bridges quipped.

Bridges said that about 11 million eggs were collected from three different spawning sessions. (Almost 9 million of the eggs were shipped to the ARDAG small-medium enterprise hatchery in Israel.) Following harvesting, the eggs were cleaned, placed in Styrofoam boxes, cooled to 22°C, and shipped to waiting hatcheries within 33 hours. Otherwise hatching would begin and the eggs would become larvae.

Involved in the process were the Malta Aquaculture Research Centre (MAR) and MFF Ltd, with the assistance of the IOLR/NCM hatchery at Eilat in Israel, and the University of Düsseldorf.

Bridges reported that there has been a good survival rate to hatching and larvae at all the hatcheries. The 125-day stage post-spawning is the critical point to watch.